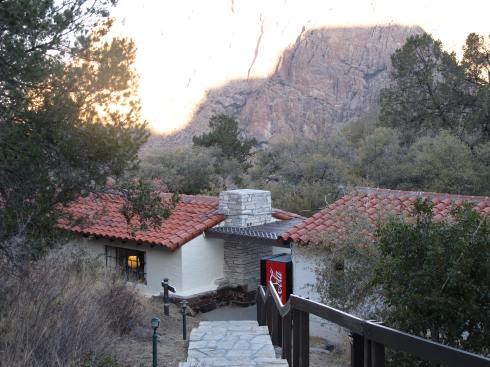 The Chisos Mountains are haunted.  According to legend, Spanish conquistadores enslaved local Apaches and forced them to work in a silver mine.  The Apaches revolted, killed their captors, and sealed the mine so well that it can’t be found.  The ghosts of the natives and their Spanish enslavers reportedly haven’t left.  The Lost Mine Trail gives hikers access to the supposedly haunted area and is the Chisos Mountains most popular hike even though it’s an almost 5 mile round trip.  The word Chisos (Chee’ sos) itself is thought to mean “phantom”.

The LMT is one of several mountain hikes ranging from easy–the fifteen minute, must-do Window View–to strenuous –up to the Ranges highest elevation, Emory Peak, and pretty much an all-day experience.  A widely available Chisos Mountains Trails Map shows and describes all of them in this 40 square-mile, volcano-created part of Big Bend National Park.

I can’t praise the Chisos Mountain Lodge enough.  The week we were there, it was doing turn away business and the 5 other accommodation choices were outside the Park and, in most cases, far more expensive and not as nice.   We saw many unhappy travelers facing long drives to sleep in fair-at-best rooms.  You can either call The Lodge to check availability (855 584 5295) or reserve on-line by putting yourself into a mini-lottery in which you make your top three choices.  Ruth and I were very lucky to get the Chisos Mountain Lodge, and we were in a historic, fun room for $134.47 per night including tax (eminently worth it).

Owned and run by Forever Resorts, CML has 72 rooms in 12 units.  It began in the 1930s with stone cottages built by the Civilian Conservation Corps.  If you ask for the Roosevelt Stone Cottages, you might get one of these.  We were in room 114 in Emory Peak Lodge.  The other units were clustered around the parking lot and closer to the store, Visitor Center, etc.  The last units were built in the 1970s and will most likely not be added to for environmental reasons.  The Lodge is really remote, water is an issue, etc.

Guests are forewarned about the downsides.  On the back of its official map it says, “If a loss of power occurs, flashlights are available at the front desk…. Power surges occur frequently.  Please protect your electronics.”
There were many steps up to our room with no TV, no phone, and wi-fi only available in the registration, restaurant, gift shop building.  The front desk closed at 9 pm.  I bent over to pick up what appeared to be a black glob of lint on the floor and realized it was a very dead black & creepy insect.

We loved the place.  The unusually friendly and helpful staff will help you plan back-road guided tours, hiking adventures, etc.  Having eaten in many not-so-deluxe, isolated lodges and hotels, Ruth and I were both delighted and shocked by the quality and variety of dishes available in the Lodge Restaurant which had the added bonus of two-story glass windows on 3 sides overlooking stunning mountains.

Since the beginning, I've had to avoid writing about the downside of travel in order to sell more than 100 articles. Just because something negative happened doesn't mean your trip was ruined. But tell that to publishers who are into 5-star cruise and tropical beach fantasies. I want to tell what happened on my way to the beach, and it may not have been all that pleasant. My number one rule of the road is...today's disaster is tomorrow's great story. My travel experiences have appeared in about twenty magazines and newspapers. I've been in all 50 states more than once and more than 50 countries. Ruth and I love to travel internationally--Japan, Canada, China, Argentina, Hungary, Iceland, Italy, etc. Within the next 2 years we will have visited all of the European countries. But our favorite destination is Australia. Ruth and I have been there 9 times. I've written a book about Australia's Outback, ALONE NEAR ALICE, which is available through both Amazon & Barnes & Noble. My first fictional work, MOVING FORWARD, GETTING NOWHERE, has recently been posted on Amazon. It's a contemporary, hopefully funny re-telling of The Odyssey. END_OF_DOCUMENT_TOKEN_TO_BE_REPLACED
This entry was posted on Sunday, January 6th, 2013 at 8:23 pm and posted in Texas. You can follow any responses to this entry through the RSS 2.0 feed.
« Big Bend’s Desert
Big Bend’s River »