The Canine Image, Museum of the Dog 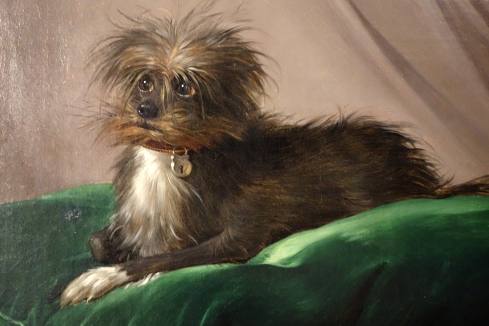 “The AKC Museum of the Dog is the only fine arts Museum in the world devoted to the canine image,” receptionist Pam Schuchat told me.  Since she specified fine arts, I wondered if there were other dog museums and googled TRAVEL-MOMENTS IN TIME.  There’s a National Bird Dog Museum, a Border Collie Museum, and a curiosity-stirring Vintage & Collectible Dog Jewelry Museum.  On TMT, Lori judged The American Kennel Club Museum of the Dog her “best recommendation.”   I found this Museum at 1721 South Mason Road in West St. Louis County’s Queeny Park both a 5 Compass attraction and much more than a fine arts experience.

A museum focused on dogs was conceived in 1971 when the Westminster Kennel Club decided to promote humane education and improve the life of the dog.  The Dog Museum of America in the New York Life Building at 51 Madison Avenue resulted.  Growing fast, it moved to the 1853 Jarville house in St. Louis County.   One of Jarville’s previous owners had been Edgar Queeny, a Monsanto Company President.  Within 2 years (1989) a 14,000 square feet addition was necessary.

The Dog Museum’s current Director, Barbara McNab, says in Sirius, this Museum’s newsletter,”Without dogs, our houses are cold receptacles for things.  Dogs make a fine warmer with their curled presence.  They wake us, greet us, protect us, and ultimately carve a place in our hearts and our history.”  Well said & no surprise that during her watch this museum’s a totally dog-centered space where visitors share galleries with real dogs. Those who step into its obedience training school are invited to stay.  Its book and video library is available for research by appointment.

Displayed art includes at least 700 original paintings, bronzes, prints, etc. The oldest are some 16th century Asian temple dogs, and the newest is a recently acquired, prize-winning oil painting by Jerry Gadamus named “Golden Heritage”.   Even though it depicts my favorite breed, the Golden Retriever, I didn’t select it for this blog.  Nor did I pick Christine Merrill’s very recognizable “Millie on the South Lawn”, a famous painting of the Bush family’s beloved English Springer Spaniel.  I didn’t even choose a painting by Sir Edwin Henry Landseer, whom I learned is the world’s most popular & respected dog artist.  “Affenpincher Lying on a Green Pillow”, artist unknown, won my heart.

It took our party of 4–Martha & Julie, 2 of my sisters, Ruth, and myself–a couple of hours to share our favorites & minimally explore this museum’s vast collection.  A carousel dog figure, some elegant Meissen dog figurines, dog sleds, police canine units, DOGS FOR DEFENSE about dogs in war–this museum has it all.

On my way out, I suggested that at least one memento of Asta, the 1930s dog star, be added to its movie tribute and was told that this Museum would love to but haven’t been given one yet.  They depend on gifts.

If you’re a dog fancier, you’ll love the AKC Museum of the Dog.  And if you have an Asta movie poster or the like, I known just the place for it.

PS  The Museum of the Dog moved to New York City and opened in Midtown Manhattan at Park Avenue and 40th Street in February, 2019.

Since the beginning, I've had to avoid writing about the downside of travel in order to sell more than 100 articles. Just because something negative happened doesn't mean your trip was ruined. But tell that to publishers who are into 5-star cruise and tropical beach fantasies. I want to tell what happened on my way to the beach, and it may not have been all that pleasant. My number one rule of the road is...today's disaster is tomorrow's great story. My travel experiences have appeared in about twenty magazines and newspapers. I've been in all 50 states more than once and more than 50 countries. Ruth and I love to travel internationally--Japan, Canada, China, Argentina, Hungary, Iceland, Italy, etc. Within the next 2 years we will have visited all of the European countries. But our favorite destination is Australia. Ruth and I have been there 9 times. I've written a book about Australia's Outback, ALONE NEAR ALICE, which is available through both Amazon & Barnes & Noble. My first fictional work, MOVING FORWARD, GETTING NOWHERE, has recently been posted on Amazon. It's a contemporary, hopefully funny re-telling of The Odyssey. END_OF_DOCUMENT_TOKEN_TO_BE_REPLACED
This entry was posted on Saturday, April 13th, 2013 at 7:15 pm and posted in 5 Compass, Midwest, United States. You can follow any responses to this entry through the RSS 2.0 feed.
« TripAdvisor’s #19–Shanghai
Heard about the Heard? »

2 responses to “The Canine Image, Museum of the Dog”