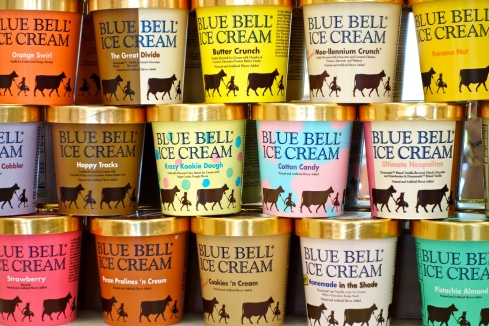 “What’s the best tourist attraction in or near College Station?” I asked the lady at the desk in the George Bush Presidential Library.  “Well, we usually send our visitors to Brenham and Blue Bell,” she said.  I had heard of neither.

Texas has many interesting small towns–Bandera, Bastrop, Alpine, etc.  Now I can add Brenham to that list.  39 miles south of College Station, it’s the original home of the Blue Bell Company that makes legendary ice cream.

The Brenham Creamery Company began churning and selling butter in 1907. By the 1930s it was Blue Bell Creameries and making ice cream so good that sales topped $100 million by 1984.  Today, ice cream is Blue Bell’s only product.  Its facility in Brenham cranks out 5 to 6 new flavors each year and uses 60,000 gallon of milk every day to create 60 flavors.  Named for the vivid purple wildflower that covers the landscape even in Texas-sized heat, Blue Bell is sloooowwly spreading.   Now in 22 states, Blue Bell claims 59% of the Texas market.   Even though it’s the #3 branded Ice cream in the United States, I hadn’t heard of it because I have never lived in a place where it’s sold.

Haley, a young college student, gave Ruth, me, and a handful of women and children a tour of Blue Bell’s production facilities.  This tour attracts almost 200,000 ice cream fans each year.  Many are repeaters anticipating samples at the end.  Long before the parlor, however, the veterans on our tour bonded over flavors like recently reunited relatives.  Haley’s favorite was a rotational or seasonal flavor, Spiced Pumpkin Pecan.  Maddy, a young girl from Houston. loved standard Dutch Chocolate.  Everyone but Ruth and me made contented sounds when Cookies ‘n Cream, Blue Bell’s #2 flavor, was mentioned.  A number of related products like chocolate cookie cones, Sugar Free Bulllets, and Sour Pops also carry the Blue Bell name.  As I listened to testimonials and watched employees go through their paces, I began to think that “we eat all we can and…sell the rest” was not just a funny slogan but also true.

After the tour we entered sampler-heaven for what Time Magazine once called “the best ice cream in the world”.  I was enraptured with Blue Bell vanilla, it’s best seller and the only flavor that the Brenham plant makes every day, and had a conscience-driven follow-up, non-fat  Strawberry yogurt.  On the way out I learned that, even though I live in a no-BB state, Outback Steakhouses sell it and that bluebell.com takes special orders.  I also learned a fact that amazed me.  In over 100 years of operation, there have been zero employee layoffs in the Brenham ice creamery.

I was amazed again the next day when I was telling a guy in Austin about my Blue Bell experience and he frowned.  He told me that the more premium the ice cream, the quicker it must be eaten before icing and flavor-loss begins.  Blue Bell makes a big deal out of freshness.  “Our ice cream…was milk and cream the day before we deliver it to your supermarket,” they assure.  And once it leaves the supermarket, no one, especially me, is going to leave Blue Bell ice cream in the freezer long enough for it to ice up.

p.s.  Blue Bell has had some trouble since I wrote this blog.  After a listeriosis scare, Blue Bell is returning to stores in a 5 phase re-entry plan. During Phase 1, Blue Bell ice cream became available in a few stores on August 31, 2015.  Phase 2 will find it in Dallas, Waco, and 2 cities in Oklahoma by mid-December.

Since the beginning, I've had to avoid writing about the downside of travel in order to sell more than 100 articles. Just because something negative happened doesn't mean your trip was ruined. But tell that to publishers who are into 5-star cruise and tropical beach fantasies. I want to tell what happened on my way to the beach, and it may not have been all that pleasant. My number one rule of the road is...today's disaster is tomorrow's great story. My travel experiences have appeared in about twenty magazines and newspapers. I've been in all 50 states more than once and more than 50 countries. Ruth and I love to travel internationally--Japan, Canada, China, Argentina, Hungary, Iceland, Italy, etc. Within the next 2 years we will have visited all of the European countries. But our favorite destination is Australia. Ruth and I have been there 9 times. I've written a book about Australia's Outback, ALONE NEAR ALICE, which is available through both Amazon & Barnes & Noble. My first fictional work, MOVING FORWARD, GETTING NOWHERE, has recently been posted on Amazon. It's a contemporary, hopefully funny re-telling of The Odyssey. END_OF_DOCUMENT_TOKEN_TO_BE_REPLACED
This entry was posted on Friday, November 1st, 2013 at 10:37 pm and posted in 5 Compass, Texas. You can follow any responses to this entry through the RSS 2.0 feed.
« Dubai Scores 7 of 10
When In Glasgow, Have Tea and Meet Mackintosh »