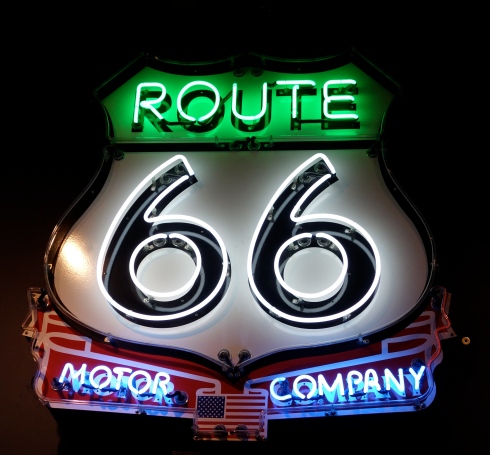 planetware.com lists Route 66 as the #1 tourist attraction in Oklahoma.   This doesn’t surprise me because Planet Ware Inc. is in Ontario, Canada.  Interest in historic Route 66 from Chicago to LA has faded a bit among Americans, but it remains high among foreign visitors.  Bikers from Germany, Asians in tour buses, and couples from England will likely share your space if you visit any facilities displaying old Route 66 signs, gas pumps, motel memorabilia, etc.

Ruth and I have done a bit of Route 66 exploring in the past 2 years, and we have discovered that there’s more to see in Oklahoma than in any other state.  In fact, the best museum devoted to Route 66 that we’ve visited so far is 85 miles directly west of Oklahoma City in Clinton.  It’s understandable that it’s there because the National Highway 66 Association headquartered in Clinton for almost 30 years after World War II.  The Association disbanded in the 1980s, but high interest in Route 66 remains.  According to TripAdvisor, the Oklahoma Route 66 Museum is the #1 tourist attraction in town and all but 5 of the 141 people who took the time to review it rated it either Excellent or Very Good.  They are right.

The Clinton Route 66 Museum seen today has been around since 1995.  Now advertising itself as Oklahoma’s official 66 showcase, it was extensively remodeled in 2012 and is now organized by eras with 7 galleries.  The Federal Government and State of Oklahoma both contributed to the half-million dollar upgrade.   The unusually enthusiastic staff made sure that I learned that this was the most profitable of the Route 66 facilities operated by the Oklahoma Historical Society (OHS).

Route 66 was established in 1926, completed end-to-end in 1937, and decommissioned in 1985.  The 1950s was its Golden Age.  In this museum each decade was cleverly introduced by a license plate arch.  The oldest plate was a real 1926 Oklahoma one.  Music from each decade entertained me as I passed through each arch and gallery.  The museum’s focus was on Oklahoma’s particular impact on 66.  During the 1930s Dust Bowl, Okies fled in large numbers to places like California.  This was explored in John Steinbeck’s magnificent novel The Grapes of Wrath, which gave Route 66 its most enduring nickname, The Mother Road.  The original plan was for 66 to cover 2,448 miles, but its constructed length was 2,190 miles because sections were eliminated in the final paving, like the part that would have taken it through Santa Fe, New Mexico.  Current maps have stopped including old Route 66 except in Oklahoma.

Even though the Clinton Route 66 Museum was a 5 Compass experience, Ruth and I are still driven to explore more of Oklahoma’s fixation with Route 66.  There’s an Interpretive Center in Chandler in a 1930s native sandstone armory building that claims to present an intimate look at the Dust Bowl.  Chandler, here we come!

Since the beginning, I've had to avoid writing about the downside of travel in order to sell more than 100 articles. Just because something negative happened doesn't mean your trip was ruined. But tell that to publishers who are into 5-star cruise and tropical beach fantasies. I want to tell what happened on my way to the beach, and it may not have been all that pleasant. My number one rule of the road is...today's disaster is tomorrow's great story. My travel experiences have appeared in about twenty magazines and newspapers. I've been in all 50 states more than once and more than 50 countries. Ruth and I love to travel internationally--Japan, Canada, China, Argentina, Hungary, Iceland, Italy, etc. Within the next 2 years we will have visited all of the European countries. But our favorite destination is Australia. Ruth and I have been there 9 times. I've written a book about Australia's Outback, ALONE NEAR ALICE, which is available through both Amazon & Barnes & Noble. My first fictional work, MOVING FORWARD, GETTING NOWHERE, has recently been posted on Amazon. It's a contemporary, hopefully funny re-telling of The Odyssey. END_OF_DOCUMENT_TOKEN_TO_BE_REPLACED
This entry was posted on Tuesday, June 30th, 2015 at 9:22 pm and posted in Oklahoma. You can follow any responses to this entry through the RSS 2.0 feed.
« Vancouver Will Get Even Better
Page, Arizona, Continued »