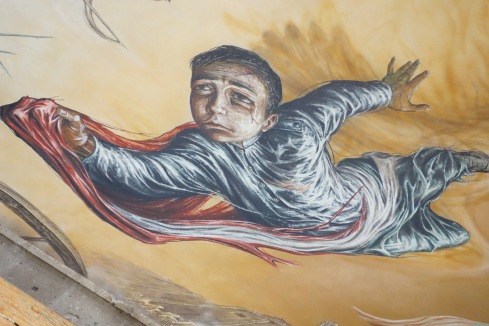 Chapultepec means grasshopper hill.  There’s a castle on Grasshoppper Hill in Mexico City.  It has a long history.   It’s also one of the top ten attractions in this sprawling metropolis.   The castle on the hill is surrounded by a park. Some say it’s the largest city park in the world.  Some say it’s just the largest in Latin America.  It could be both.   Bosque de Chapultepec is undeniably a well-used green space. The building atop the hill, the only royal castle in North America, is large too.

This hill was fortified by Aztecs.  When the Spanish arrived, they built a chapel on this 200 feet high natural elevation from which you can now see a great deal of Mexico City.   A couple of hundred years passed.   A summer palace was erected on this hill.  It became a military academy in 1841.  Five years later the Mexican-American War broke out.   In 1847 the United States invaded Mexico. The students in the military academy were ordered to retreat.   Defiantly, six cadets fought the enemy and died.  The last one standing wrapped the Mexican flag around himself and jumped off the battlement.

Time out for a true story.  Shortly before Ruth & I left for Mexico City, I told a friend named Julie about our plans.  Now an adult with children, Julie began reminiscing about her trip to this city when she was a teenager.  All she remembered seeing was a painting on a ceiling of what looked like a huge flying boy.   When Ruth and I were in the Castillo de Chapultepec, I looked up and saw the cadet leaping to his death.  “That must be what Julie described to me,” I told Ruth. I took a picture of it to show her.  She was thrilled to see it again.  This very dramatic, memorable mural was exactly what she remembered.

After the war the castle became the presidential palace beginning with Emperor Maximilian, the younger brother of the emperor of Austria.   It remained the president’s residence until 1939.  Now it’s the multi-faceted National History Museum.  Allow several hours to see this 5 Compass attraction.

What I liked most were the staircases, presidential memorabilia, and the murals.  The double staircase pictured here is made of wood, stone, and brass.  It leads to the second floor and more memorabilia, including some jewelry worn by presidential wives.  On the first floor are some decorated room which clearly show the residents’ nostalgia for Europe. The murals I especially liked were by David Alfaro Siqueiros, whom I learned was a fiery Marxist who joined the Mexican Revolution when he was 18.  Later, when he was an artist living in Los Angeles, Jackson Pollock was a student of his.

Since the beginning, I've had to avoid writing about the downside of travel in order to sell more than 100 articles. Just because something negative happened doesn't mean your trip was ruined. But tell that to publishers who are into 5-star cruise and tropical beach fantasies. I want to tell what happened on my way to the beach, and it may not have been all that pleasant. My number one rule of the road is...today's disaster is tomorrow's great story. My travel experiences have appeared in about twenty magazines and newspapers. I've been in all 50 states more than once and more than 50 countries. Ruth and I love to travel internationally--Japan, Canada, China, Argentina, Hungary, Iceland, Italy, etc. Within the next 2 years we will have visited all of the European countries. But our favorite destination is Australia. Ruth and I have been there 9 times. I've written a book about Australia's Outback, ALONE NEAR ALICE, which is available through both Amazon & Barnes & Noble. My first fictional work, MOVING FORWARD, GETTING NOWHERE, has recently been posted on Amazon. It's a contemporary, hopefully funny re-telling of The Odyssey. END_OF_DOCUMENT_TOKEN_TO_BE_REPLACED
This entry was posted on Monday, July 11th, 2016 at 10:47 pm and posted in Mexico. You can follow any responses to this entry through the RSS 2.0 feed.
« New in Vancouver
Nacogdoches Struggles »