The Sandhills constitute the largest, most complex wetland ecosystem in the United States.   Rand McNally dots Nebraska State Highway 2 to show it is scenic almost all the way from just north of Grand Island to Alliance; and it is beautiful in a quiet, unassuming way.  However, it’s not zowie like California’s Highway 1. There are very few dips and curves for 272 miles.  Oh, it’s consistently lovely, rolling, and tree dotted with elevated but not mountainous terrain always in the distance.  The easter part of the drive means farms growing soybeans, alfalfa, and corn.  Further west, travelers are far more likely to see hay fields and grazing cattle.  The land seems flat but it’s nevertheless rising from 1,800 to almost 4,000 feet.  Trains are a common sight.

Do I recommend this drive?  Yes.  It’s more hypnotic than monotonous, and there are many evenly-spaced small town along the way.  Many of them are not large enough to have gas stations and other services.   I saw few places to sleep.   The best town was Broken Bow.  Although the impressively named Sandhills Journey Scenic Byway Interpretive Center is there, the Sandhills don’t actually begin until the town of Anselmo, and the first exposed sand I saw was west of Halsey.  They get more visible if you turn north on Highway 27 and journey to Chadron.

These hills are actually grass covered sand dunes atop the Ogallala Aquifer, which pops up periodically in the form of low lakes and ponds.  After a while the land looks the same for miles, but this is deceiving.  There are 720 different plants out there and lots of birds and animals.  I saw pheasant feathers when I stopped to stretch.   I also took lots of photos but, like the road, they’re not zowie. 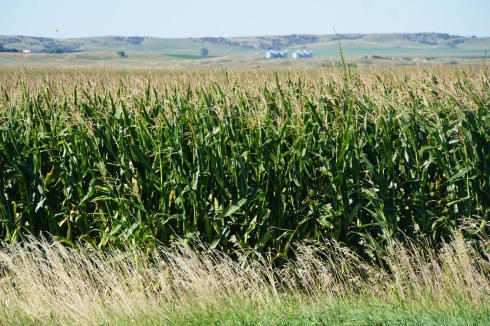 People with guns come to Broken Bow from all over the U.S. each November when the town hosts the Nebraska One Box Pheasant Hunt.  For 2 days they hunt, attend shooting competitions, social events, etc.  An ad for this annual gathering in the Broken Bow’s Chamber of Commerce directory says, “Equipped with ONE BOX of shells, only ONE five-member team can share the glory of bagging the most birds.”   Thanks to these sporting events, scholarships get funded, shooting programs send young people to national competitions, and wildlife habitats get support.

Although Highway 2 continues to the town of Alliance, it stops being scenic at Ellsworth according to Rand McNally.  That’s because you’re pretty much at the western edge of the Sandhills here and must continue north to see more of them.   They cover more than 25% of Nebraska. 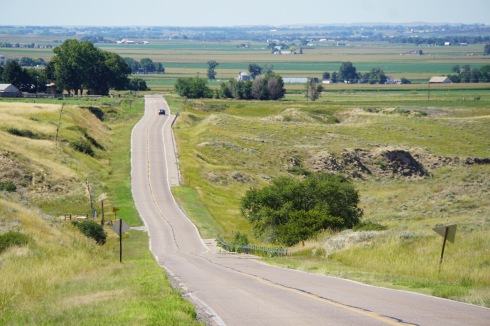 Since the beginning, I've had to avoid writing about the downside of travel in order to sell more than 100 articles. Just because something negative happened doesn't mean your trip was ruined. But tell that to publishers who are into 5-star cruise and tropical beach fantasies. I want to tell what happened on my way to the beach, and it may not have been all that pleasant. My number one rule of the road is...today's disaster is tomorrow's great story. My travel experiences have appeared in about twenty magazines and newspapers. I've been in all 50 states more than once and more than 50 countries. Ruth and I love to travel internationally--Japan, Canada, China, Argentina, Hungary, Iceland, Italy, etc. Within the next 2 years we will have visited all of the European countries. But our favorite destination is Australia. Ruth and I have been there 9 times. I've written a book about Australia's Outback, ALONE NEAR ALICE, which is available through both Amazon & Barnes & Noble. My first fictional work, MOVING FORWARD, GETTING NOWHERE, has recently been posted on Amazon. It's a contemporary, hopefully funny re-telling of The Odyssey. END_OF_DOCUMENT_TOKEN_TO_BE_REPLACED
This entry was posted on Wednesday, September 21st, 2016 at 8:53 pm and posted in Nebraska. You can follow any responses to this entry through the RSS 2.0 feed.
« Tinkertown Tickled Me
Moscow Traffic »