The Joslyn Gets Better

When the Joslyn Memorial opened in 1931, Omaha greeted it with astonishment.  I did to, in 2016.  I simply didn’t expect to find a museum of this scope in Omaha.  I had been there before.  Ruth hadn’t.  My second visit was far better than my first.  The first time I judged it fine but typical.

Sarah Joslyn was an unassuming woman.  Even though she provided funds for it, she attended the Joslyn’s opening by blending into the crowd.  “I am just one of the public,” she said to those who recognized her.  She judged this new art deco museum her gift to the people of Omaha.

George, Sarah’s husband, learned bookkeeping and printing skills in Montreal. Later, his Iowa based company sent him to Omaha to open a new branch office.   Ten years later he was president of and stockholder in the Western Newspaper Union.  Back then, print journalism created millionaires.  When he died in 1916, George was the richest man in Nebraska.   Sarah pursued her interests in music, dogs, and flowers in their 34 room mansion and fifteen years later attended the Joslyn’s opening.

If the Joslyn has a specialty, it’s Western Art.  One of Charles Bird King’s more famous paintings, “Oto Half Chief Shaumonekusse”, is in its collection. When he was 4, King’s father was scalped and killed by Native Americans in Ohio. He gained a reputation in Washington, DC, for painting skilled portraits of famous Americans like James Monroe and Daniel Webster.   After that, he traveled west and became one of the great Native American portrait painters. The Joslyn has a large collection of Karl Bodmer’s works.  Swiss and French Bodmer made his mark in Germany as a landscape painter before going to the American West like King and becoming one of its best illustrators.  But the Joslyn also has the works of fine regional American painters like N C Wyeth, European masters like Renoir, Asian Art, Greek antiquities, etc. That’s Grant Wood’s “Stone City Iowa” below this paragraph. 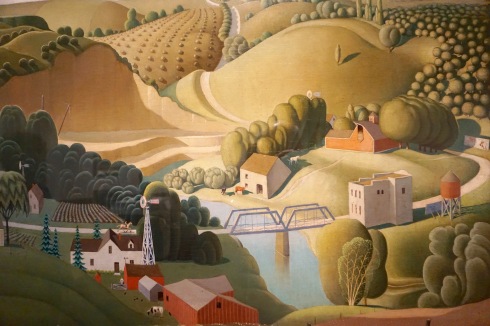 Teacher Ruth especially liked Art Works, a big room for budding artists with youthful curiosity.  School groups are not permitted to use its 9 interactive activity stations designed to stimulate creativity.  I literally had to pull her out of Art Works.

Three years ago the Joslyn stopped charging admission to see its permanent collection.  This 5 Compass museum  is full of pleasant surprises.  Go.

Since the beginning, I've had to avoid writing about the downside of travel in order to sell more than 100 articles. Just because something negative happened doesn't mean your trip was ruined. But tell that to publishers who are into 5-star cruise and tropical beach fantasies. I want to tell what happened on my way to the beach, and it may not have been all that pleasant. My number one rule of the road is...today's disaster is tomorrow's great story. My travel experiences have appeared in about twenty magazines and newspapers. I've been in all 50 states more than once and more than 50 countries. Ruth and I love to travel internationally--Japan, Canada, China, Argentina, Hungary, Iceland, Italy, etc. Within the next 2 years we will have visited all of the European countries. But our favorite destination is Australia. Ruth and I have been there 9 times. I've written a book about Australia's Outback, ALONE NEAR ALICE, which is available through both Amazon & Barnes & Noble. My first fictional work, MOVING FORWARD, GETTING NOWHERE, has recently been posted on Amazon. It's a contemporary, hopefully funny re-telling of The Odyssey. END_OF_DOCUMENT_TOKEN_TO_BE_REPLACED
This entry was posted on Sunday, September 25th, 2016 at 6:37 pm and posted in Nebraska. You can follow any responses to this entry through the RSS 2.0 feed.
« Pioneer Square’s Comeback
Dracula and The Walking Dead »