Pioneers heading west on three trails saw them.  They were considered a bit of an obstacle, so much so that their original route went south and bypassed them.  But after the California Gold Rush and a dramatic increase in traffic, it was discovered that an easy trail could be made between them. Mitchell Pass shortened everyone’s route by 8 miles.  Now all travelers had to contend with were wind, quicksand, floods, disease, buffalo stampedes, winter, etc.

The excellent visitor center at Scotts Bluff is on top of the old Oregon Trail and tells well the story of their journey west.  It has been part of the landscape since 1919.  It’s especially good at explaining the Mormon Trail in accurate and interesting detail.  Using an odometer to note the distance travelled, 47,000 Saints passed through here.  Many folks on the Oregon and California trails nicknamed it the Nebraska Gibraltar.  The natives called it Me-a-pa-te, or “hill that is hard to go around”.  After West Coast bound pioneers shared this trail with Pony Express riders for a brief time, wagon trains waned.  Railroads replaced them. 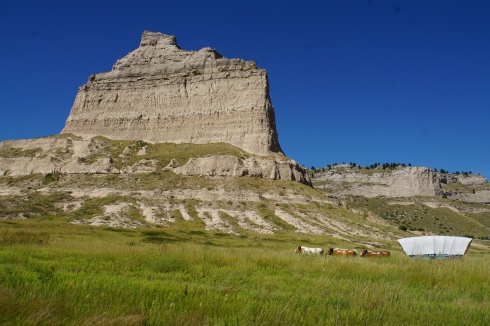 There is no road to the top of South Bluff.  There is. however, one to the very summit of Scotts Bluff and I highly recommend it if you’re in a passenger car. The road is short but twisty and there are 3 tunnels.  the view of the town of Scotts Bluff and the surrounding land is lovely from 800 feet above it all.   Keep a lookout for rattlesnakes on all area trails.  Today, they, not the road, present the greater danger to visitors.

Since the beginning, I've had to avoid writing about the downside of travel in order to sell more than 100 articles. Just because something negative happened doesn't mean your trip was ruined. But tell that to publishers who are into 5-star cruise and tropical beach fantasies. I want to tell what happened on my way to the beach, and it may not have been all that pleasant. My number one rule of the road is...today's disaster is tomorrow's great story. My travel experiences have appeared in about twenty magazines and newspapers. I've been in all 50 states more than once and more than 50 countries. Ruth and I love to travel internationally--Japan, Canada, China, Argentina, Hungary, Iceland, Italy, etc. Within the next 2 years we will have visited all of the European countries. But our favorite destination is Australia. Ruth and I have been there 9 times. I've written a book about Australia's Outback, ALONE NEAR ALICE, which is available through both Amazon & Barnes & Noble. My first fictional work, MOVING FORWARD, GETTING NOWHERE, has recently been posted on Amazon. It's a contemporary, hopefully funny re-telling of The Odyssey. END_OF_DOCUMENT_TOKEN_TO_BE_REPLACED
This entry was posted on Wednesday, October 19th, 2016 at 8:20 pm and posted in Nebraska. You can follow any responses to this entry through the RSS 2.0 feed.
« The Famous Sandia Peak Tramway
Dangerous Roads »