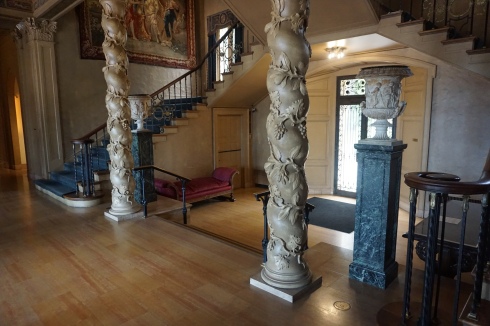 The AAA gives the Philbrook Museum in Tulsa a GEM.  I wouldn’t.

The Philbrook is in a posh residential neighborhood because it was, at first, the home of an oilman.  Waite and Genevieve Phillips built an elaborate 72 room mansion that was completed in 1927.  They moved in and 11 years later relocated to Los Angeles.   The Phillips didn’t return for the opening when their villa became the Philbrook Museum in 1939.   I assume that when they moved they took their best art acquisitions with them.  I would.

The Philbrook is strong in decorative and religious art and Native American pieces.  Little of it was truly distinctive or attention-holding.  Maybe their best stuff is in storage.  I did rather admire an antique-looking papier-mache globe light fixture that was a da Vinci replica.   There was a wildly overdone depiction of the Grand Canyon by Thomas Moran on one wall that was clearly intended to be attention-holding.   I don’t know if it once belonged to the Waites.  I don’t have a wall big enough to hang it.  Would I own it if I did?  I wouldn’t.

The eyes in one painting followed me eerily.  We saw a floor that Mrs. Phillips bought from a Paris nightclub and installed for $626.  One museum floor passed over a sunken tub.   A rather garish stained glass window depicting Dante’s Inferno was up a grand but mansion-typical staircase as were some tapestries. Would I take them down and store them if I could?  I would.

Our guide ended the tour in a small African Gallery.  On one wall was the mask of a woman.  It was from Gabon.  The description of it noted that it represented an ideal image of womanhood. Would I return to the Philbrook to see it again?  I wouldn’t.

But I would definitely return to Tulsa’s Gilcrease Museum.

Since the beginning, I've had to avoid writing about the downside of travel in order to sell more than 100 articles. Just because something negative happened doesn't mean your trip was ruined. But tell that to publishers who are into 5-star cruise and tropical beach fantasies. I want to tell what happened on my way to the beach, and it may not have been all that pleasant. My number one rule of the road is...today's disaster is tomorrow's great story. My travel experiences have appeared in about twenty magazines and newspapers. I've been in all 50 states more than once and more than 50 countries. Ruth and I love to travel internationally--Japan, Canada, China, Argentina, Hungary, Iceland, Italy, etc. Within the next 2 years we will have visited all of the European countries. But our favorite destination is Australia. Ruth and I have been there 9 times. I've written a book about Australia's Outback, ALONE NEAR ALICE, which is available through both Amazon & Barnes & Noble. My first fictional work, MOVING FORWARD, GETTING NOWHERE, has recently been posted on Amazon. It's a contemporary, hopefully funny re-telling of The Odyssey. END_OF_DOCUMENT_TOKEN_TO_BE_REPLACED
This entry was posted on Wednesday, November 9th, 2016 at 9:07 pm and posted in Oklahoma. You can follow any responses to this entry through the RSS 2.0 feed.
« One Hermann, Two Brothers
Fantasy Shopping at Exotic & Hyman in St. Louis »