I truly admire Chris Jones.  Chris runs the Bug Museum in Bremerton.  Ruth and I followed him around as he fed some of his critters.  He also took a couple of interesting residents in the Reptile Room out of their display cases to show us.  About the only thing I didn’t like was the Bug Museum’s brochure.  It called this facility the BREMERTON CHILDREN’S BUG & REPTILE MUSEUM.  I enjoyed it as much as any child, and I’m way past childhood.

This is only the 2nd bug museum I’ve heard about and been to.  I checked to see if there are others and there are several.  The first one I experienced was in Victoria, British Columbia, and is called The Bug Zoo.  My favorite attraction in that Vancouver Island city, I have recommended it to many travelers and blogged about it.    I hope the other bug museums and insectariums, (Wikipedia lists almost 20) are as much fun as the well-organized, spotlessly clean Bug Museum in Bremerton.

I admire Chris because he knows so much about his charges, endlessly attends to their needs, and is so interested in them and their welfare.   While feeding the Red Ackie Monitor, he told Ruth & me about the rigors of maintaining its live food, and I couldn’t help but think how critical he was to this operation.

The Red Ackie was especially interesting.  This Australian native is in the same family as the Komodo Dragon, but Chris told us that it is a naturally docile creature.  The most interesting Bug Museum resident Chris took out to show us was the legless or glass lizard, a native of Scotland.  It looked like but wasn’t a snake.  Chris told us that some Scots whip them until their tails come off.  I also studied a Silver Salamander, an aquatic eel-like being with gills that was like nothing I had ever seen before.

The Bug Museum is a small, 5 Compass attraction across from the Shipyard on Charleston Beach Road.  It’s brochure promises “tiny turtles, huge lizards, creepy roaches and bizarre bugs”.   Go and see them. 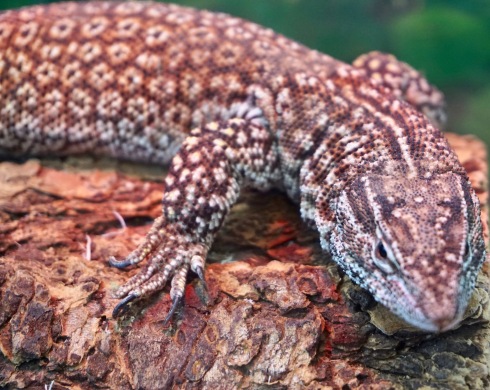 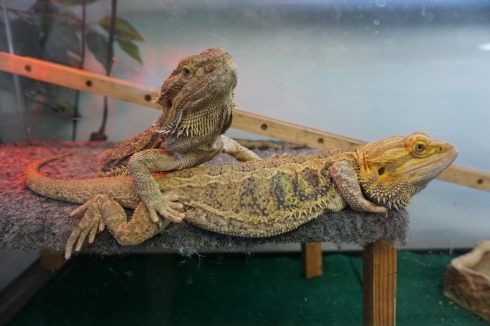 Since the beginning, I've had to avoid writing about the downside of travel in order to sell more than 100 articles. Just because something negative happened doesn't mean your trip was ruined. But tell that to publishers who are into 5-star cruise and tropical beach fantasies. I want to tell what happened on my way to the beach, and it may not have been all that pleasant. My number one rule of the road is...today's disaster is tomorrow's great story. My travel experiences have appeared in about twenty magazines and newspapers. I've been in all 50 states more than once and more than 50 countries. Ruth and I love to travel internationally--Japan, Canada, China, Argentina, Hungary, Iceland, Italy, etc. Within the next 2 years we will have visited all of the European countries. But our favorite destination is Australia. Ruth and I have been there 9 times. I've written a book about Australia's Outback, ALONE NEAR ALICE, which is available through both Amazon & Barnes & Noble. My first fictional work, MOVING FORWARD, GETTING NOWHERE, has recently been posted on Amazon. It's a contemporary, hopefully funny re-telling of The Odyssey. END_OF_DOCUMENT_TOKEN_TO_BE_REPLACED
This entry was posted on Wednesday, November 30th, 2016 at 9:18 pm and posted in Washington State. You can follow any responses to this entry through the RSS 2.0 feed.
« Underrated Tacoma
From Argentina to Uruguay »