Cuba has 5 belief systems.  The smallest group of believers is a religious community of Jews.  Once 50,000 strong, Jews reportedly now number only 1,500.   They live mostly in Havana.  It’s estimated that 94% of Jews left for the United States and other countries after the Communist Revolution.  Castro declared Cuba to be an atheistic state and 80% of Catholic priests left too.   At that time, 80% of Cubans said they were Catholics.  The Communist Party excluded Catholics, then the dominant religious group, from certain professions according to my Michelin travel guide appropriately called Cuba…Like a Local.  There are an estimated half a million Protestants on this island.

Fidel Castro renounced atheism in 1992 and foreign priests returned. Four years later Castro greeted Pope John Paul II at the Vatican. Two years later the Pope traveled to Cuba and said mass for 100,000 Catholic attendees, the largest religious gathering in Cuba’s history.  Christmas traditions that had been forbidden since 1969 returned, but it wasn’t until 1998 that Christmas Day again became a public holiday. 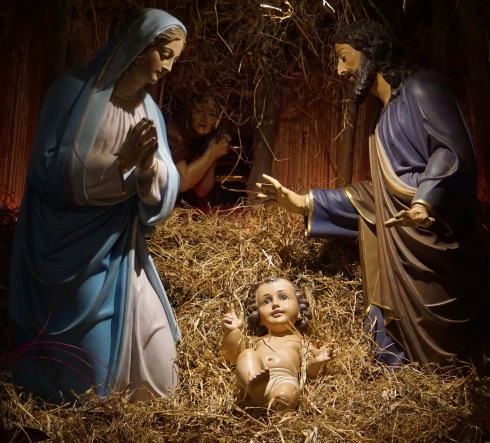 The current pope, Francis, visited in 2015.  In Santiago de Cuba he declared, “Wealth takes away the best of us” and called on the Cuban Catholic church to embrace a spirit of poverty.  He couldn’t have chosen a better place to deliver that message.

While we traveled on the Adonia to Cuba, Ruth attended a lecture on the 2nd most common belief system in this island nation.  Santeria, she learned, is the 2nd most practiced religion in Cuba.  Its number of adherents is difficult to determine, but we saw its female acolytes several times.  Santeria’s root is Nigeria’s Yoruba religion.  The Spanish tried to Christianize the slaves they brought to Cuba, but Africans managed to preserve their own rituals while melding 2 beliefs. It’s hard to tell the difference between Cuba’s Patron Saint, Our Lady of Charity, and Oshún, an important deity in Yoruba mythology. Catholic saints by day became African deities by night.  Castro banned Santeria too.

But Santeria has made a big comeback.  Santerians communicate with God by drumming and dancing. Mother Drum controls the beat on the percussion instrument that only men can play.  When Ruth told me this, I recalled Desi Arnaz and his bongos.  Unless they’re I Love Lucy fans, those under the age of 50 probably won’t know who Desi is.  He was Lucy Ricardo’s Cuban husband and a bandleader.  His most popular number was Babalú.  Thanks to Ruth, I now know that Babalú Ayé is the highest ranking priest in Santeria.  Ruth got good at spotting female Santeria novices who dress all in white and wear no makeup.   They live under many restrictions and sit on the floor a lot.

Since the beginning, I've had to avoid writing about the downside of travel in order to sell more than 100 articles. Just because something negative happened doesn't mean your trip was ruined. But tell that to publishers who are into 5-star cruise and tropical beach fantasies. I want to tell what happened on my way to the beach, and it may not have been all that pleasant. My number one rule of the road is...today's disaster is tomorrow's great story. My travel experiences have appeared in about twenty magazines and newspapers. I've been in all 50 states more than once and more than 50 countries. Ruth and I love to travel internationally--Japan, Canada, China, Argentina, Hungary, Iceland, Italy, etc. Within the next 2 years we will have visited all of the European countries. But our favorite destination is Australia. Ruth and I have been there 9 times. I've written a book about Australia's Outback, ALONE NEAR ALICE, which is available through both Amazon & Barnes & Noble. My first fictional work, MOVING FORWARD, GETTING NOWHERE, has recently been posted on Amazon. It's a contemporary, hopefully funny re-telling of The Odyssey. END_OF_DOCUMENT_TOKEN_TO_BE_REPLACED
This entry was posted on Thursday, January 26th, 2017 at 8:57 pm and posted in International Travel. You can follow any responses to this entry through the RSS 2.0 feed.
« BIMA’s Artists’ Books on Bainbridge Island
The Sustained Wolfsonian »