The Homestead community has 140 families and about 1,200 people. It began in 1973 in New York City in an inner city mission called “Voice in the Wilderness”. The people you meet in the Homestead craft village talk far more about crafts than religious beliefs.  They are Anabaptists,  believers who were persecuted in the 16th century.  The Amish, Hutterites, and Mennonites are direct descendants of the Anabaptist Movement.  On their website, homesteadheritage.com, you have to search to find much beyond crafts.   If you want to read their whole history, for example, you need a password.

Ruth & I knew nothing about this community when we revisited Waco recently.  It turned out to be the most interesting attraction in this small city. Actually, it’s about 10 miles north of Waco.   We learned about it and its craft village when we asked someone about local restaurants.  The venerable one we wanted to try, Elite Cafe, was closed, maybe for a long time.  Maybe forever. The girl questioned said with conviction, “The best place to eat is out at the homestead, but they close at 6 pm.”  It was 5:30.  Closing at this early time seemed strange for a restaurant, so we went to the Homestead Traditional Craft Village the next morning and back to it at 4 pm to have dinner at Cafe Homestead. It was great.

This is a non-traditional traditional craft village.   I don’t tend to like such attractions.   If you’ve seen one blacksmith…..  Quilts and pottery abound in such villages as they do here.  When we asked our dinner recommender who ran this village, she said with total conviction, “Mennonites.”  This was not true.   They are Anabaptists and the women at the Waco Visitor Center told me that they are friendly, not cultish. 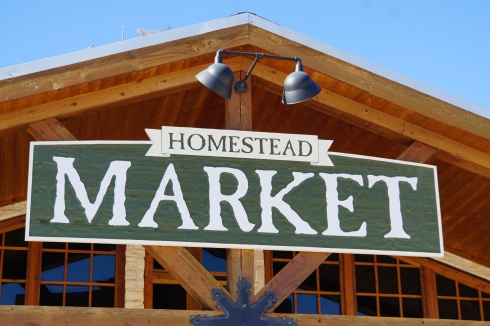 Our first contact with this community occurred in its Homestead General Store, which is a few miles from the village.  The prices were high but the products for sale were unique and the smell in the store was wonderful. Disoriented and curious, I asked a stocking woman about some of the more unusual items for sale and she went to get Jerry.  Jerry answered my questions vaguely but honestly and was as friendly as he needed to be.  He told me that this was a non-denominational, intentional Christian community.  I told him that the people of Waco, who love his restaurant, think they are Mennonites. He laughed. 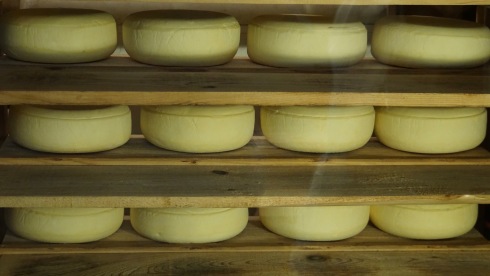 If you ask Ruth, The Homestead Craft Village’s best products to buy would include its cheeses.   They make a fine marinated feta and other delights and have won awards.  We visited the artisan cheese makers and their aging facility, The Gift Barn, which also had a wonderful aroma and where fine furniture was sold, etc.   We did not enter the Phoughshare Institute for Sustainable Culture, Heritage Ministries, etc.   The young members who served us dinner at 4 pm really seemed to care that we enjoyed our food.

Jerry told me that they are thinking of keeping the restaurant opened a bit later than 6 pm.  We heard that its hard to breakfast or lunch on the weekends at Cafe Homestead because of the large crowds.  This did not surprise Ruth or me.

ps  In June I learned what happened to the Elite Cafe.  It’s a Gaines project.  Chip and Joanna Gaines of “Fixer Upper” live in Waco and love it.  In addition to starring in their HGTV series, they develop projects there.  The historic Elite is being transformed into a breakfast restaurant called Magnolia Table by them.  It will open by the end of 2017.

Since the beginning, I've had to avoid writing about the downside of travel in order to sell more than 100 articles. Just because something negative happened doesn't mean your trip was ruined. But tell that to publishers who are into 5-star cruise and tropical beach fantasies. I want to tell what happened on my way to the beach, and it may not have been all that pleasant. My number one rule of the road is...today's disaster is tomorrow's great story. My travel experiences have appeared in about twenty magazines and newspapers. I've been in all 50 states more than once and more than 50 countries. Ruth and I love to travel internationally--Japan, Canada, China, Argentina, Hungary, Iceland, Italy, etc. Within the next 2 years we will have visited all of the European countries. But our favorite destination is Australia. Ruth and I have been there 9 times. I've written a book about Australia's Outback, ALONE NEAR ALICE, which is available through both Amazon & Barnes & Noble. My first fictional work, MOVING FORWARD, GETTING NOWHERE, has recently been posted on Amazon. It's a contemporary, hopefully funny re-telling of The Odyssey. END_OF_DOCUMENT_TOKEN_TO_BE_REPLACED
This entry was posted on Wednesday, February 15th, 2017 at 9:33 pm and posted in Texas. You can follow any responses to this entry through the RSS 2.0 feed.
« Tulips, Indonesia, and Sixt
A Mammoth Undertaking in Waco »