Granbury Gets Even Better 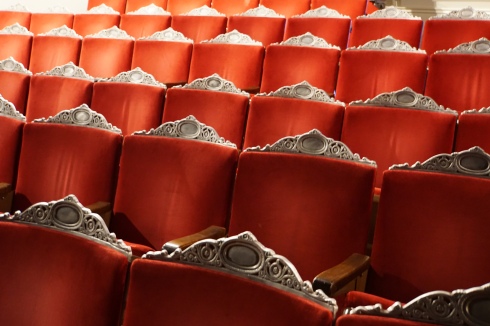 40 miles southwest of Fort Worth, Granbury is said to have the best town square in Texas.  It’s certainly my favorite.  Ruth and I visited this town last year for the first time and really liked it.  This year we met Sam Houston.

I was taking photos of The Square as Sam was coming out of a white-tiled theater entrance.  He was in an expansive mood and told us that he was involved in a project to schedule this underused theater for live performances. He rattled off a few familiar names as examples of entertainers he and his cohorts were hoping to bring to Granbury.  He took Ruth and me inside to see it and then the venue next door that might be used for meet-and-greets.   The theater was small, intimate, attractive, and ready for live performers.

Sam told us that he was a performer and that his given name really was Sam Houston.  He told us that he travels around Texas in a one-man show becoming the historical Sam Houston, the colorful Lion of Texas.  He told us some stories about his often notorious namesake and said that he enjoyed speaking to school groups and conventioneers while becoming the man responsible for Texas’ statehood and probably the only politician to be the Governor of 2 states.  The other one was Tennessee.

Sam told us that after visitors admired Granbury’s thriving town square with it centerpiece 150-year-old courthouse, attended a performance in the opera house, and saw Jesse James grave that there wasn’t much else to keep them there.  He and others hoped to use the square’s other theater to keep them in Granbury a bit longer to hear a show biz trooper perform and, perhaps, answer questions from the audience.  Sam mentioned Texan Lyle Lovett.  I suggested Lucinda Williams, who was born in Louisiana but has lived in Texas.  We wished Sam success in his new endeavor and crossed the street.

Granbury already has live theater.   Ruth & I entered the Granbury Opera House and met actor Kevin Baum, who let us go upstairs to see it.   Built in 1886, it ceased being a performance venue in 1911.  After being a bowling alley, the folks of Granbury decided to return it to its original function.  A successful, small town theater company began crafting and presenting musicals and plays in the newly renovated opera house.  They attracted audiences from all over Texas.  The current show was Steel Magnolias.  Kevin told us that he was trying out for a role in the upcoming Shrek, The Musical.

There might soon be yet another reason besides small-town-charm for Ruth & me to return to Granbury.

Since the beginning, I've had to avoid writing about the downside of travel in order to sell more than 100 articles. Just because something negative happened doesn't mean your trip was ruined. But tell that to publishers who are into 5-star cruise and tropical beach fantasies. I want to tell what happened on my way to the beach, and it may not have been all that pleasant. My number one rule of the road is...today's disaster is tomorrow's great story. My travel experiences have appeared in about twenty magazines and newspapers. I've been in all 50 states more than once and more than 50 countries. Ruth and I love to travel internationally--Japan, Canada, China, Argentina, Hungary, Iceland, Italy, etc. Within the next 2 years we will have visited all of the European countries. But our favorite destination is Australia. Ruth and I have been there 9 times. I've written a book about Australia's Outback, ALONE NEAR ALICE, which is available through both Amazon & Barnes & Noble. My first fictional work, MOVING FORWARD, GETTING NOWHERE, has recently been posted on Amazon. It's a contemporary, hopefully funny re-telling of The Odyssey. END_OF_DOCUMENT_TOKEN_TO_BE_REPLACED
This entry was posted on Thursday, February 23rd, 2017 at 11:02 pm and posted in Texas. You can follow any responses to this entry through the RSS 2.0 feed.
« Hola Havana
Portuguese Tiles and Much More at Bonnet House »