Another 19th century Renaissance Man besides Lew Wallace was Robert Browning.  He wasn’t, however, quite as diverse as Lew.  Reportedly reading by the age of 5, Browning spoke Latin, French, and Greek by the age of 14.  He traveled extensively and lived for many years in Italy, which he called his university.  He was known for his poetry and his witty sayings like “A man’s reach should exceed his grasp”.  He wrote poetry for children, like “The Pied Piper of Hamelin”.  By the time he died in England, he was regarded as a philosopher/poet.  Shortly before his death, he made what is now the oldest surviving recording in Great Britain.

His writing career was overshadowed by his marriage.  When he was 34, Browning married Elizabeth Barrett.  She was 40.  They had one child who was known by the nickname Pen and became an artist. Elizabeth’s father was against their marriage and disinherited her.  The couple moved to Italy and remained there until her death 15 years later.  It was a good marriage. Elizabeth Barrett Browning also became a poet, perhaps the better one.  Her most famous poem was probably “How do I Love Thee”, which continues “let me count the ways”. 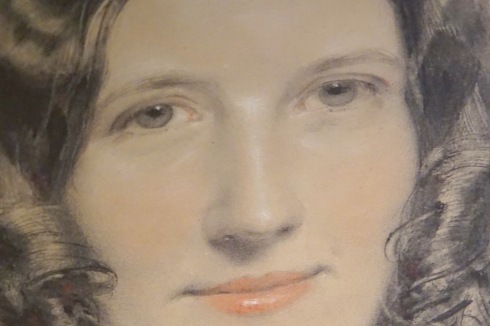 You don’t have to go to Italy or England to appreciate this couple.  You have to go to Waco, Texas, where the Armstrong Browning Library and Museum holds, rather surprisingly, the world’s largest collection of Browning material, including a lot of personal items like Robert’s favorite gold ring and paintings Pen made of his father.  It’s there because of Dr. A. Joseph Armstrong, who was head of Baylor University’s English Department for 40 years, a Browning scholar, and a master at fund raising.

The Armstrong Browning Library & Museum’s building on Baylor’s campus is as important as the Browning collection inside.  It looks much older than it is. It wasn’t dedicated until 1952.  On its upper level are several rooms being used by serious students who appreciate its world-defying quietness. The rooms contain Browning displays and 62 windows that celebrate their poetry.  This is the world’s largest collection of secular stained glass.   The windows were created between 1924 and 1951.   Toward the back of this level is the McLean Foyer of Meditation, a huge cube with a dome used for reflection and ceremonies.  It’s even quieter than the library rooms and where Ruth & I met a female Baylor student who visits often.   Sitting in an alcove like she was playing hide and seek, she told Ruth & me that this was her favorite place on the campus.

Upstairs is a Victorian drawing room, a portrait gallery, and some Boehm porcelain birds. Downstairs is the Dotson Wedgewood (mostly jasper ware) Collection, the largest in the United States.  There is a connection.  Robert corresponded with and met Josiah Wedgwood’s great-granddaughter Julia.

The Armstrong-Browning Library, a decidedly unusual attraction, is an Italian Renaissance building on the campus of the largest Baptist university in the world deep in the heart of Texas.

Since the beginning, I've had to avoid writing about the downside of travel in order to sell more than 100 articles. Just because something negative happened doesn't mean your trip was ruined. But tell that to publishers who are into 5-star cruise and tropical beach fantasies. I want to tell what happened on my way to the beach, and it may not have been all that pleasant. My number one rule of the road is...today's disaster is tomorrow's great story. My travel experiences have appeared in about twenty magazines and newspapers. I've been in all 50 states more than once and more than 50 countries. Ruth and I love to travel internationally--Japan, Canada, China, Argentina, Hungary, Iceland, Italy, etc. Within the next 2 years we will have visited all of the European countries. But our favorite destination is Australia. Ruth and I have been there 9 times. I've written a book about Australia's Outback, ALONE NEAR ALICE, which is available through both Amazon & Barnes & Noble. My first fictional work, MOVING FORWARD, GETTING NOWHERE, has recently been posted on Amazon. It's a contemporary, hopefully funny re-telling of The Odyssey. END_OF_DOCUMENT_TOKEN_TO_BE_REPLACED
This entry was posted on Friday, March 17th, 2017 at 9:11 pm and posted in Worthwhile Attraction. You can follow any responses to this entry through the RSS 2.0 feed.
« MHM Has Another Winner
Bravo Show Low »