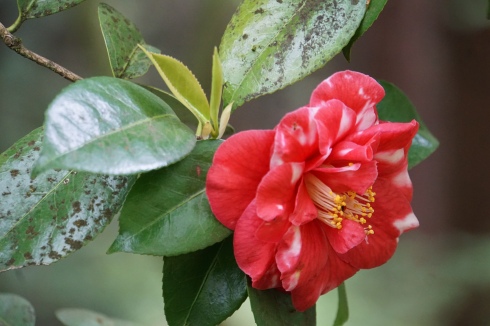 Portland is a city without significant tourist attractions.  When I’m on the road and talk to people who have been there, they usually speak favorably about its restaurants, night spots, hotels, and Voodoo Doughnuts, but they don’t rave about what they saw.  Its famous rose garden has gotten oppressively hard to park near.  Powell’s City of Books remains busy.  Portland’s setting at the bottom of the Columbia Gorge is a major plus.   Parking anywhere but especially in Washington Park can be an unpleasant challenge.  My favorite Portland attraction, the Japanese Garden, is across the road from the rose garden in that park.  It has been completely closed for some time for a $33,500,000 upgrade and reopened on April 2, 2017.   Ruth, I, and hundreds of other people visited this past weekend to see what was done.   The money was well spent.

This Japanese Garden was dedicated in 1961.   It’s 5 gardens on 5.5 acres didn’t open to the public until 6 years later and only in the summer.  Year-round visits became possible about 15 years later.  Japanese dignitaries like Nobuo Matsunaga, an ambassador, judged it the most beautiful Japanese Garden in the world outside of their country.   I have seen many authentic Japanese gardens and this is true.

The garden itself remains pretty much the way it has always been, but a cultural village has been added.  We entered it as soon as we paid the entrance fee and walked up the new hillside path to the Tanabe Welcome Center.   The village was designed by Kengo Kuma who is also working on the National Stadium for the upcoming 2020 summer Olympics in Tokyo.  The village increases the garden’s size by 3.4 acres and enhances the visitor experience by exposing all to Japanese culture via a large courtyard, the Jordan Schnitzer Japanese Arts Learning Center, and a new gift shop.  The Japanese Village atmosphere recreated is known as monzenmachi, the look of the gate-front towns that surround sacred shrines and temples.

After seeing the new village, we entered the gardens on ballast stones meant to slow us down and saw familiar surroundings.  We joined the last guided tour of the day led by Carol, who immediately told us that we would see 5 distinctively different gardens.   The 1st was for strolling, the 2nd designed for use in traditional tea ceremonies, the next was a natural garden, the 4th was an austere sand and stone garden, and the last was the familiar flat garden near the old Pavilion Gallery, which remains.  Carol told us about the typical tea ceremony, hide and reveal techniques, the gifted peace lantern, etc.  With traditional hide and reveal, a typical Japanese garden characteristic, we heard water before we saw it.

Visit this city for its unique lifestyle but include the newly enhanced Japanese Garden to see Portland at its best.

Since the beginning, I've had to avoid writing about the downside of travel in order to sell more than 100 articles. Just because something negative happened doesn't mean your trip was ruined. But tell that to publishers who are into 5-star cruise and tropical beach fantasies. I want to tell what happened on my way to the beach, and it may not have been all that pleasant. My number one rule of the road is...today's disaster is tomorrow's great story. My travel experiences have appeared in about twenty magazines and newspapers. I've been in all 50 states more than once and more than 50 countries. Ruth and I love to travel internationally--Japan, Canada, China, Argentina, Hungary, Iceland, Italy, etc. Within the next 2 years we will have visited all of the European countries. But our favorite destination is Australia. Ruth and I have been there 9 times. I've written a book about Australia's Outback, ALONE NEAR ALICE, which is available through both Amazon & Barnes & Noble. My first fictional work, MOVING FORWARD, GETTING NOWHERE, has recently been posted on Amazon. It's a contemporary, hopefully funny re-telling of The Odyssey. END_OF_DOCUMENT_TOKEN_TO_BE_REPLACED
This entry was posted on Monday, May 8th, 2017 at 9:09 pm and posted in Oregon. You can follow any responses to this entry through the RSS 2.0 feed.
« 12 Difficult Destinations
The Mammoth Mayborn »

2 responses to “Human in Scale: the Portland Japanese Garden”