There’s an old water tower across the street from the Magic Chef Mansion in St. Louis. Once there were 500 water towers in the United States.  Now there are 7.  The most famous one is in Chicago.  It has been turned into a photographic gallery.   Two of the water towers in St Louis are in questionable neighborhoods, not well-preserved, and are not available for tours.  Our Compton Hill Water Tower host discouraged Ruth and me from trying to see them beyond a drive-by.  The 3rd, Compton Hill, can be toured twice a month.

As we climbed the 198 steps to its top, John Maxwell, President of the society that preserves it, told us that it was not unusual for 300 people to show up for tours each month and that only 25 at a time are allowed inside the tower.  The volunteers accommodate as many of the 300 as they can.  I questioned John as to what % of them might be visitors to St. Louis, and he said, maybe, 5%. Later, he graciously agreed to let me use his phone number to accommodate any blog readers who are driven to see Compton Hill like we did.  314 398 2519

If you want to see the best 360º view of this city through several openable windows 179 feet above a park with an altitude already above sea level, call John.  He will tell you about the tours given on the 1st Saturday of each month and on the night of the full moon. Because this water tower is HIS long-term project, he might even give you a personal off-time tour in the morning like he did for Ruth and me.

Harvey Ellis designed this French Romanesque tower in 1893.  It was completed in 1898.  I’ll leave the technical details concerning dangerous surges in water pressure making its construction necessary to John.  I’ll also let him tell you the funny story of the Naked Truth sculpture.  I’m not being prudish.  I didn’t learn about it until much later.  The Compton Hill Water Tower was impressive enough to be a star of the still-talked-about 1904 St. Louis World’s Fair and end up on the National Register of Historic Places. 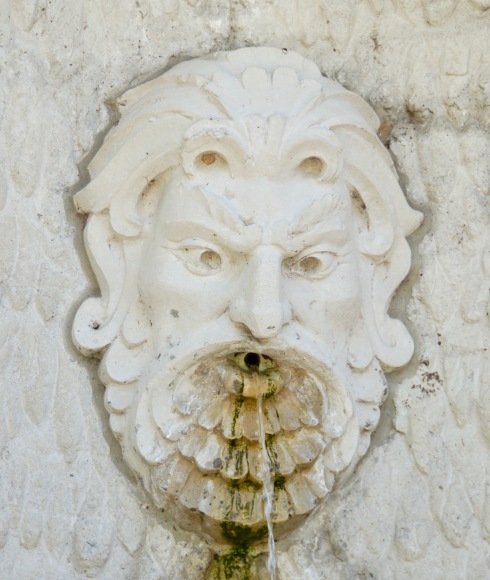 Harvey Ellis was something of a misfit and rebel.  Among the reasons why he was kicked out of West Point was his failure to keep his boots shined.  Even though he was a mostly self-taught architectural designer, Ellis got many commissions.  He went to work for Stickley Furniture as a designer about the time of the World’s Fair but died 6 months later.  Years of smoking and drinking caught up with him at the age of 51.  His decorated limestone, brick, and terra-cotta water tower still stands.

Since the beginning, I've had to avoid writing about the downside of travel in order to sell more than 100 articles. Just because something negative happened doesn't mean your trip was ruined. But tell that to publishers who are into 5-star cruise and tropical beach fantasies. I want to tell what happened on my way to the beach, and it may not have been all that pleasant. My number one rule of the road is...today's disaster is tomorrow's great story. My travel experiences have appeared in about twenty magazines and newspapers. I've been in all 50 states more than once and more than 50 countries. Ruth and I love to travel internationally--Japan, Canada, China, Argentina, Hungary, Iceland, Italy, etc. Within the next 2 years we will have visited all of the European countries. But our favorite destination is Australia. Ruth and I have been there 9 times. I've written a book about Australia's Outback, ALONE NEAR ALICE, which is available through both Amazon & Barnes & Noble. My first fictional work, MOVING FORWARD, GETTING NOWHERE, has recently been posted on Amazon. It's a contemporary, hopefully funny re-telling of The Odyssey. END_OF_DOCUMENT_TOKEN_TO_BE_REPLACED
This entry was posted on Friday, May 26th, 2017 at 8:05 pm and tagged with Should See Attraction and posted in Uncategorized. You can follow any responses to this entry through the RSS 2.0 feed.
« St. Louis’ Different Suburbs
Cornish Pasties »