According to Lori Thornhill, Stella Mudge’s blue and silver Talbot-Lago is now valued at $9,000,000.  Lori would know.  She’s an Archivist at the Nethercutt Collection and an encyclopedia of information about it. Nethercutt is the best and least known car museum of my travel experience.  Lori told me that it isn’t advertised and relies on word-of-mouth to attract visitors.  The Nethercutt collection is different in other ways.  One of the more significant is that, unlike other car collections, these beauties have engines and are regularly driven. Moreover, about 90% of what’s on display was collected by one couple, Dorothy and J.B. Nethercutt.

In 1913 J.B. moved from Indiana to California to live with his aunt.  Together, they founded a cosmetic company in 1931.  His aunt’s name was Merle Nethercutt Norman.   J.B. married Dorothy and they began collecting cars and winning prizes after restoring them.   He bought his aunt out, and Merle Norman Cosmetics continued to grow under his management.  When Dorothy and J.B.s’ obsession became extensive enough, they opened a museum in Sylmar in the 1970s to display them.  They ultimately owned more than 250 cars.  It costs nothing to see their collection, but access is controlled. 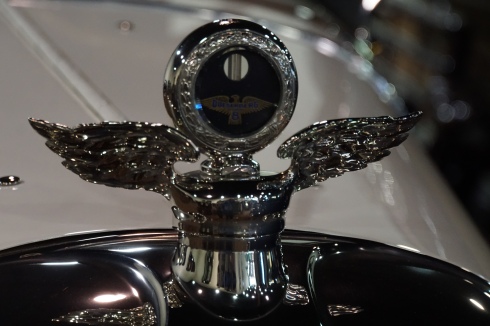 Many of the Nethercutts’ best cars, including the 1923 Voisin Rudolph Valentino

shipped to Hollywood when he was a major movie star, can be seen any time between 9 am and 4:30 pm from Tuesday through Saturday.  But if you want to see Fatty Arbuckle’s 1923 McFarlan, you have to take a tour.  More of the Nethercutt’s acquisitions, over 50 classic cars, and their rare mechanical musical instruments and their 1912 Pullman private car can be seen by reservation only.   Guided tours are available at 10 am and 1:30 pm Thursday through Saturday.  Call 818 364 6464.

Ruth and I learned some interesting car facts, like Mary Anderson invented the windshield wiper, and watched some excellent videos before browsing the collection.  We have to return to see the only Gladiator, not a car but a musical marvel, still in existence because it’s only seen on the guided tour.

At one point I asked Lori to name the star of the collection and she said without hesitation that a 1931 Bugatti Type 51 was among the 3 bests.  As we were discussing it, this Bugatti was on its way to the Rodeo Drive Car Show to delight all who might see it on Fathers’ Day.  She referred to a couple of the cars as “off-body”, and I wasn’t familiar with this term.   She explained that it refers to a chassis made for only one car. 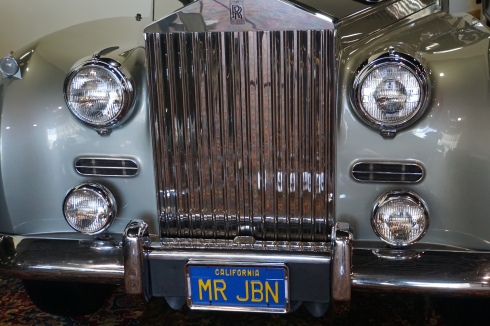 I liked the story about the 1932 Maybach, one of only 2 made, that was smuggled out of East Germany under a pile of cabbages during the Cold War and I loved the Nethercutt Collection.   I’ve never seen so many Rolls Royces under one roof.   Check this dazzling 5 Compass place out!

Since the beginning, I've had to avoid writing about the downside of travel in order to sell more than 100 articles. Just because something negative happened doesn't mean your trip was ruined. But tell that to publishers who are into 5-star cruise and tropical beach fantasies. I want to tell what happened on my way to the beach, and it may not have been all that pleasant. My number one rule of the road is...today's disaster is tomorrow's great story. My travel experiences have appeared in about twenty magazines and newspapers. I've been in all 50 states more than once and more than 50 countries. Ruth and I love to travel internationally--Japan, Canada, China, Argentina, Hungary, Iceland, Italy, etc. Within the next 2 years we will have visited all of the European countries. But our favorite destination is Australia. Ruth and I have been there 9 times. I've written a book about Australia's Outback, ALONE NEAR ALICE, which is available through both Amazon & Barnes & Noble. My first fictional work, MOVING FORWARD, GETTING NOWHERE, has recently been posted on Amazon. It's a contemporary, hopefully funny re-telling of The Odyssey. END_OF_DOCUMENT_TOKEN_TO_BE_REPLACED
This entry was posted on Monday, June 19th, 2017 at 9:16 pm and posted in California. You can follow any responses to this entry through the RSS 2.0 feed.
« Too Many Grammys
Magnificent MONA »