Ruth & I had to attend a memorial service for a grand lady in West Plains, MO this past week.  Traveling there and back allowed time for only one attraction in St. Louis, our hometown. It was interesting but a bit static.

“Reigning Men: Fashion in Menswear,  1715-2015” will be the featured big exhibit at the St. Louis Art Museum in Forest Park until September 17, 2017.   It will close in Los Angeles, the only other venue I’ve been able to find, on August 21, 2017.  The displays, therefore, clearly overlap since “Reigning Men” has already opened in St. Louis.  If it will move to other cities and venues, I’ve not been able to find out which ones.  If I learn about them, I’ll pass the information along.  There’s a catalog available on Amazon and elsewhere.

This show was organized by the Los Angeles County Museum of Art (LACMA), which has a considerable permanent collection of men’s clothing.  What makes this show unique is its focus of what MEN wear. Ruth was quick to point that out to me since most fashion displays are about what WOMEN wear.   The literature accompanying it said that this show “showcases the dynamism of men’s clothing over 300 years.” Dynamic is a good word to describe the outfits but not the show.

The exhibit in St. Louis had 5 themed sections full of male mannequins wearing what attention-getting men have shown up in when being photographed by, say, The New York Times or GQ.  Of course, David Bowie makes an appearance.  What men tend to wear, the exhibition demonstrates, is highly influenced by events and culture. Many of the outfits seemed military or uniform-like to me.  “Men use clothing,” it proclaimed, “to express their individuality.”   This may be true in the media and fashion worlds, but not-so-much on the streets where tee shirts, shorts, and flip-flops currently reign.

The outfits range from a flamboyant British macaroni outfit to zoot suits to thong swimwear to Japanese and Eastern inspired creations.  Some towards the end hint at the future.   There is considerable variety displayed.   The macaroni was especially vivid with lace, a corsage, and eye-fillingly chartreuse!  The only mainstream material in the exhibit that every male wears is that cultural uniform made of denim.  A few cases show shoes made by Prada, etc.  The most arresting shoes, to me, were the high top wing sneakers that I don’t think I’ll be shopping for any time soon. 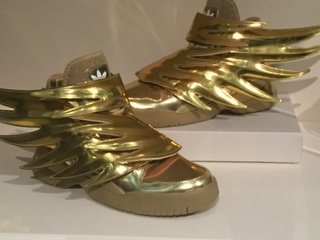 While I highly respected all that I saw and was amazed by its complexity, I did find it rather static.  After seeing mannequin after mannequin lined up in room after room, I longed for some action.  I don’t know how that might be achieved in such an exhibit.  Go see “Reigning Men” for its singularity but don’t expect to come out like you would after seeing a dynamic summer-action movie.

Since the beginning, I've had to avoid writing about the downside of travel in order to sell more than 100 articles. Just because something negative happened doesn't mean your trip was ruined. But tell that to publishers who are into 5-star cruise and tropical beach fantasies. I want to tell what happened on my way to the beach, and it may not have been all that pleasant. My number one rule of the road is...today's disaster is tomorrow's great story. My travel experiences have appeared in about twenty magazines and newspapers. I've been in all 50 states more than once and more than 50 countries. Ruth and I love to travel internationally--Japan, Canada, China, Argentina, Hungary, Iceland, Italy, etc. Within the next 2 years we will have visited all of the European countries. But our favorite destination is Australia. Ruth and I have been there 9 times. I've written a book about Australia's Outback, ALONE NEAR ALICE, which is available through both Amazon & Barnes & Noble. My first fictional work, MOVING FORWARD, GETTING NOWHERE, has recently been posted on Amazon. It's a contemporary, hopefully funny re-telling of The Odyssey. END_OF_DOCUMENT_TOKEN_TO_BE_REPLACED
This entry was posted on Saturday, July 15th, 2017 at 8:36 pm and posted in California, Missouri. You can follow any responses to this entry through the RSS 2.0 feed.
« Our Wetland Adventure Continues
Circling the Penwith Peninsula »