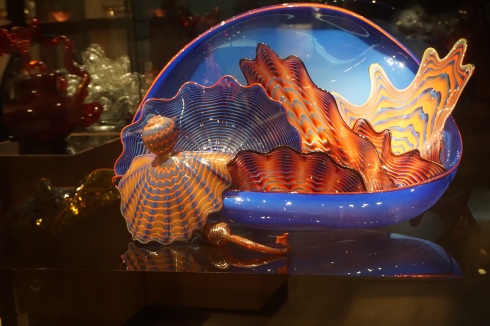 For now, the best restaurant in Tacoma is Wild Fin American Grill.  It’s in the new and very popular condo, entertainment, and shopping area off of Ruston Way at 5115 Grand Loop.  There’s a free parking garage practically across the street from it.  Wild Fin has 2 other locations in the Seattle area.  Both are southeast of Lake Washington in the satellite communities of Renton and Issaquah.  Don’t go without a reservation.

The Grand Cinema is not as grand is its name but a community supported, non-cineplex movie theater that offers less-than-superhero films, a classic film series, sing-alongs, etc.

Don’s Ruston Market is a classic soda fountain that has survived its era.  The Olson family ran it for 3 generations beginning in 1906, but now Don and Beth Torbet are in charge.  It’s fun to stop there on your way to Point Defiance Park, which is near.  Ruth always gets an old-fashioned chocolate soda.  It’s on the corner of North 51st and Winnifred.

It’s not hard to find Dale Chihuly glass creations in Tacoma, especially when you’re downtown. Ask about their Chihuly Glass Walking Tour at TAM (Tacoma Art Museum) if you’re a fan.  The tour has 19 stops at 5 locations.  Tacoma has a Bridge of Glass, a Museum of Glass, etc.

The elegant Hotel Murano on Broadway not too far from the theater district is the best place to stay in Tacoma but not the only choice.  There are La Quintas, Holiday Inn Expresses, etc.  Many who like to combine leisure time with gambling stay at the 2-part Emerald Queen Hotel & Casino.

The Karpeles Manuscript Library at 407 South G Street can be interesting but it’s hours are limited and parking can be difficult.  Run by a dedicated couple, it was closed the last time we tried to visit.    It’s across from Wright Park and dedicated to the letters and documents of great human beings who have shaped history and been influential during their lifetimes.

War Memorial Park is a small gem not found by most visitors.  We tracked it down the last time we were in Tacoma because it has good views of the Tacoma Narrows Bridge.  The USS Tacoma ran aground and broke up near Veracruz, Mexico, in 1924.  Its bell was saved and is in this narrow park. 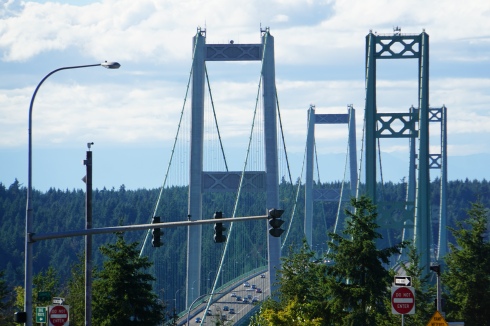 It’s fun to take the ferry over to Vashon but its a largely residential island and, unlike Bainbridge, there’s not much for tourists to do except drive around and admire its, for now, quiet lifestyle.

Fort Nisqually calls itself a living history museum and it is.  Built in 1833, Nisqually was the 1st settlement on Puget Sound because of the fur trade, which came to the Northwest long before wagon trains and European-American settlers.

Typical of the Northwest, you’ll see lots of beautiful flowers in Tacoma.

Because of its nickname, The Biggest Little City in the World, some compare Tacoma to Reno.  Reno has its charms, but there’s more to do in Tacoma.

ps  I’m sad to report that Don’s Ruston Market mentioned above has closed.  If anyone knows where to get an old-fashioned ice cream soda in the Tacoma area, please let me know.

Since the beginning, I've had to avoid writing about the downside of travel in order to sell more than 100 articles. Just because something negative happened doesn't mean your trip was ruined. But tell that to publishers who are into 5-star cruise and tropical beach fantasies. I want to tell what happened on my way to the beach, and it may not have been all that pleasant. My number one rule of the road is...today's disaster is tomorrow's great story. My travel experiences have appeared in about twenty magazines and newspapers. I've been in all 50 states more than once and more than 50 countries. Ruth and I love to travel internationally--Japan, Canada, China, Argentina, Hungary, Iceland, Italy, etc. Within the next 2 years we will have visited all of the European countries. But our favorite destination is Australia. Ruth and I have been there 9 times. I've written a book about Australia's Outback, ALONE NEAR ALICE, which is available through both Amazon & Barnes & Noble. My first fictional work, MOVING FORWARD, GETTING NOWHERE, has recently been posted on Amazon. It's a contemporary, hopefully funny re-telling of The Odyssey. END_OF_DOCUMENT_TOKEN_TO_BE_REPLACED
This entry was posted on Saturday, September 23rd, 2017 at 7:48 pm and posted in Washington State. You can follow any responses to this entry through the RSS 2.0 feed.
« Surprising Tacoma
A Foxy Fur Trade Museum »