Trinity Cathedral was on our to-do list for Columbia, SC, near the bottom, but Ruth & I lingered too long at Congaree, so we only had 1 hour to fill before our appointment at the Governor’s Mansion.  It moved up the list.  Sometimes, an attraction that you don’t expect to see turns out to be very worthwhile.  However, a tour list can have so many places of worship on it that they begin to blur together and the final one ends up being on my one-too-many list.  Luckily, my Columbia list had only one cathedral on it.

Trinity is memorable for its windows and its graveyard, but I could not verify a lot of what I heard during the tour.  Our volunteer guide,  a member of the church, was dear but new at the job.  Before we even started seeing Trinity, she and her more experienced mate had a disagreement about the Cathedral’s architectural style.  I suspect that Gothic was correct.

The first windows we saw were in the back of the cathedral and mostly had flower themes.  Our guide told us they were Tiffany, and they certainly looked like they were.  But the Trinity Cathedral website said they were in the Tiffany-style.  They were certainly easy on the eyes.  Our guide told us that this cathedral, which is across the street from the State House, has 3,000 members.  The website says more than 3,600.  She told us that it was modeled on York in England.  I assume that’s York Minster Cathedral. 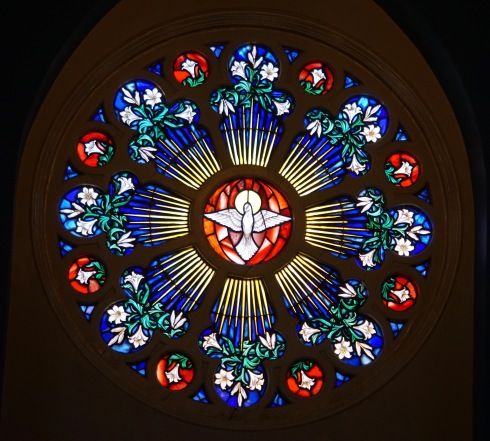 While I took photos of the unverified Tiffanies, Ruth and our guide walked toward the altar to admire the windows over it.  When I joined them they were discussing copper foil stained glass windows, which the colorful windows supposedly were.  Trinity’s brochure calls them the Shand windows made by the Belcher Mosaic Glass Company.  In any event, they were spectacular.  Trinity Cathedral has 3 rose windows.  Built in 1845, only 3 of the windows we were seeing were original, like the slightly hidden green one below.

Our charming guide told us that her nickname is Patty but that her give name is Patience.  She said that she was of French-Scottish ancestry and the 8th female in her family to have this name.  Her granddaughter was #8.  She took us outside to the graveyard to show us where some family members were buried.    I have no doubt she was accurate about this.  As we approached, she told us the difference between a graveyard and a cemetery.  A graveyard is attached to a church and used for member burial;  but a cemetery, being for everyone, doesn’t demand membership.  I didn’t know this but verified this difference via research.  The graveyard was as impressive as the cathedral.  This graveyard contains the remains of many Confederate casualties, 6 South Carolina governors, and the Confederacy’s poet laureate, Henry Timrod.

Columbia’s Trinity Cathedral was an unexpected delight and a 5 Compass attraction, but  I experienced some confusion while learning about its many beautiful windows.  This didn’t diminish my admiration of them.

Since the beginning, I've had to avoid writing about the downside of travel in order to sell more than 100 articles. Just because something negative happened doesn't mean your trip was ruined. But tell that to publishers who are into 5-star cruise and tropical beach fantasies. I want to tell what happened on my way to the beach, and it may not have been all that pleasant. My number one rule of the road is...today's disaster is tomorrow's great story. My travel experiences have appeared in about twenty magazines and newspapers. I've been in all 50 states more than once and more than 50 countries. Ruth and I love to travel internationally--Japan, Canada, China, Argentina, Hungary, Iceland, Italy, etc. Within the next 2 years we will have visited all of the European countries. But our favorite destination is Australia. Ruth and I have been there 9 times. I've written a book about Australia's Outback, ALONE NEAR ALICE, which is available through both Amazon & Barnes & Noble. My first fictional work, MOVING FORWARD, GETTING NOWHERE, has recently been posted on Amazon. It's a contemporary, hopefully funny re-telling of The Odyssey. END_OF_DOCUMENT_TOKEN_TO_BE_REPLACED
This entry was posted on Saturday, November 4th, 2017 at 7:37 pm and posted in South Carolina. You can follow any responses to this entry through the RSS 2.0 feed.
« Brilliant Bessie Smith
Glittering Gulliver’s Gate »