The day before we went to Chickamauga, Ruth and I happened to pass the Chattanooga National Cemetery on Bailey Avenue.  We stopped to take a look.  There are 135 national cemeteries.  The last one I visited and wrote about was Tahoma in Kent, Washington, which was created in 1993 and opened for burials in 1997.   Chattanooga National Cemetery opened in 1863 to commemorate the Battle of Chattanooga, which followed the Battle of Chickamauga.   Established in 1867, it was not the 1st national cemetery.  They had been created since the Mexican War.

By 1874 there had been 12,928 interments here with 4,860 of them unknown.  There was a grave locator and I was able to discover that 2 Harbaughs are buried here.   The one named Peter died in 1863 and was clearly a Civil War casualty.  Five years after the Civil War ended there were already 12,800 graves in this cemetery; 8,685 of those interred were known and many were men who died in local battles.  I don’t know if any of the casualties were women, but I did learn that there are veterans of other conflicts buried in Chattanooga National Cemetery (CNC), including 78 German prisoners of war.  Surprisingly, it still has space available.

It is estimated that 700,000 Union and Confederate soldiers died in the Civil War according to one sign.  President Lincoln was given the authority to create military burial grounds by 1862 and 14 were already 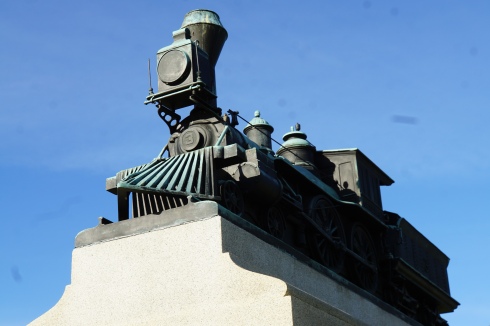 established before that year ended.  By 1872 there were 74 national cemeteries with 305,492 Civil War casualties buried in them.  2% of the U. S. population died as the result of this war.  Most of the 74 were less than 10 acres.  CNC wasn’t listed on the National Register of Historic Places until 1996.

Ruth and I noticed coins on some of the markers, and neither one of us knew why they were there.  Apparently, many people don’t know.  Ruth looked this up as we were leaving, and we learned that a nickel means that the visitor trained at boot camp with the person buried.   A quarter signifies that the visitor was with the soldier when he or she was killed.   A penny simply means that you visited.  The money is eventually collected and used for maintenance or the burial of needy veterans.

It was already late in the day when we arrived but we did see most of the monuments, like the 19th century train.  We didn’t find the Harbaughs’ graves.  However, our time spent at Chickamauga was far more meaningful because of this unplanned visit to Chattanooga National Cemetery where many of that battle’s fallen soldiers are buried.

Since the beginning, I've had to avoid writing about the downside of travel in order to sell more than 100 articles. Just because something negative happened doesn't mean your trip was ruined. But tell that to publishers who are into 5-star cruise and tropical beach fantasies. I want to tell what happened on my way to the beach, and it may not have been all that pleasant. My number one rule of the road is...today's disaster is tomorrow's great story. My travel experiences have appeared in about twenty magazines and newspapers. I've been in all 50 states more than once and more than 50 countries. Ruth and I love to travel internationally--Japan, Canada, China, Argentina, Hungary, Iceland, Italy, etc. Within the next 2 years we will have visited all of the European countries. But our favorite destination is Australia. Ruth and I have been there 9 times. I've written a book about Australia's Outback, ALONE NEAR ALICE, which is available through both Amazon & Barnes & Noble. My first fictional work, MOVING FORWARD, GETTING NOWHERE, has recently been posted on Amazon. It's a contemporary, hopefully funny re-telling of The Odyssey. END_OF_DOCUMENT_TOKEN_TO_BE_REPLACED
This entry was posted on Friday, November 17th, 2017 at 9:37 pm and posted in Tennessee. You can follow any responses to this entry through the RSS 2.0 feed.
« Hotels
South Carolina’s Only President’s Residence »