If you love guitars, head for Chattanooga.  There’s a new museum there devoted to them called Songbirds.   It opened in March, 2017, and seemed a bit expensive to visit.  But it was worth it.  Touring its private collection of rare and valuable guitars in a back room called “The Vault” was like getting access to a vintage wine collector’s stash.  I recommend the All Access Tour that includes “The Vault” and a guide like Dustin, who really knows his guitars.  All Access also includes time in the main exhibit hall, a more traditional museum venue.  This all amounts to a unique travel experience! 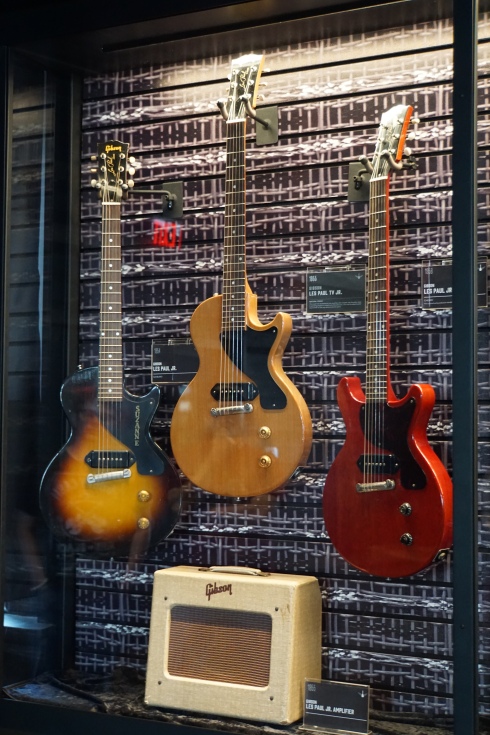 Songbirds is in a historic train station called Chattanooga Choo Choo.   Once called Terminal Station, it avoided demolition and attracted a group of investors who are spending millions turning it into an entertainment complex with restaurants and music venues like Songbirds, which offers a series of concerts featuring veteran guitarists.  Vince Gill, country music legend and guitar collector, has agreed to act as Songbird’s ambassador.  This means he promotes it whenever he can.  In an article and interview in The New York Times on November 19, for example, he says about guitars, “They shaped my life.  They’re my DNA.”  as he promotes Songbirds.  Fodor calls it one of the world’s 10 best new museums.

Although the museum is opened from 10 am until 6 or 8 pm, depending on the day of the week, tours are only given at 11 am, 1 pm, and 3 pm.  Thursday through Saturday there’s a tour at 5 pm.  This is the one I took.   Dustin led our small group past the museum and into a back area that he called The Greenroom.  It contained an impressive collection of Les Paul beauties.  In 1952 brilliant guitarist Paul put his name on a developing collection of Gibsons.  He had little to do with the design of the early ones, but he wanted each to be the gold-standard.  Today they are.  He eventually got involved in design and endorsed some that looked like tuxedos.  This museum has more than 30 colorful Les Paul Sunburst guitars.  Some of them sold for around $250 when new and are now worth millions.   Dustin told us that this room would be changed out by the end of this year. 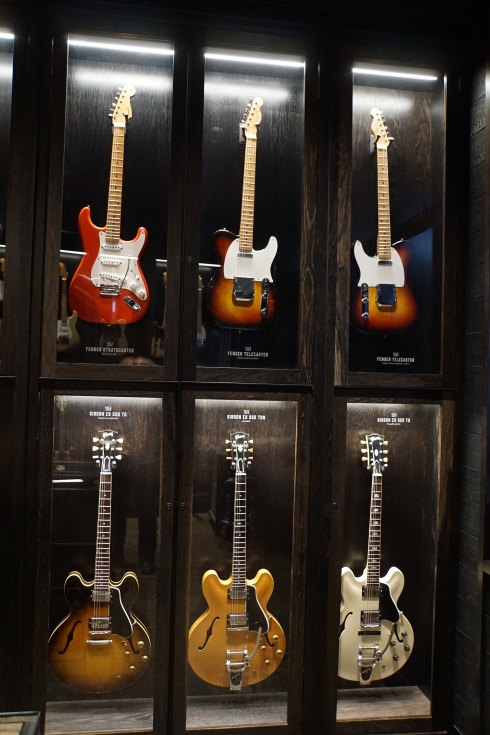 This guitar collection is the work of David Davidson and Richard Friedman, who claim to have put it together during the last 2 decades.   Their most valuable guitars are in The Vault, which Dustin used a key to enter.  In here, where we spent more than an hour, he showed us guitars once owned by Ricky Nelson and Duane Allman.  He told stories about famous guitarists like Keith Richards, Glen Campbell, and Jimi Hendrix; but his best story was about a one-of-a-kind custom Fender made for a woman named Bertha.  Though often technical and with lots of talk about colors like Aztec Gold and Surf Green, the information and stories kept us engrossed the entire time.  Dustin gingerly handled 2 Gibson Explorers that he told us were the collection’s most valuable guitars because only about 20 of them were made.

I suspect that future visitors to Songbirds will have a different experience than I did.  Because Songbirds is so new, I think that the staff is still feeling its way and may be changing its presentation, its themed offerings, etc.  Some already call it the greatest collection of American guitars.  I don’t know if this is accurate, but I do know that Songbirds is definitely fun and educational for both experienced guitarists and simple fans, like me.

Since the beginning, I've had to avoid writing about the downside of travel in order to sell more than 100 articles. Just because something negative happened doesn't mean your trip was ruined. But tell that to publishers who are into 5-star cruise and tropical beach fantasies. I want to tell what happened on my way to the beach, and it may not have been all that pleasant. My number one rule of the road is...today's disaster is tomorrow's great story. My travel experiences have appeared in about twenty magazines and newspapers. I've been in all 50 states more than once and more than 50 countries. Ruth and I love to travel internationally--Japan, Canada, China, Argentina, Hungary, Iceland, Italy, etc. Within the next 2 years we will have visited all of the European countries. But our favorite destination is Australia. Ruth and I have been there 9 times. I've written a book about Australia's Outback, ALONE NEAR ALICE, which is available through both Amazon & Barnes & Noble. My first fictional work, MOVING FORWARD, GETTING NOWHERE, has recently been posted on Amazon. It's a contemporary, hopefully funny re-telling of The Odyssey. END_OF_DOCUMENT_TOKEN_TO_BE_REPLACED
This entry was posted on Friday, December 8th, 2017 at 10:56 pm and posted in Tennessee. You can follow any responses to this entry through the RSS 2.0 feed.
« Bainbridge’s Bloedels
A Fine Capitol and a Rotten Movie »