George Washington was sworn in as President on the balcony of Federal Hall on Wall Street, New York City.  Washington spent a lot of time in New York where he dined at Fraunces Tavern, which became his New York Revolutionary War headquarters.  After this war’s last battle, Washington came here to deliver a farewell address and say goodbye to his officers before returning to Mount Vernon.  He returned in 1789 to be sworn in as the 1st President.

Samuel Fraunces bought the building at 54 Pearl Street that is now the location of Fraunces Tavern in 1762 when it was a large brick house belonging to the DeLancey family.  Several months later Fraunces, a savvy early New York City entrepreneur, opened what was called the Queen’s Head Tavern here.  It was an ideal location because it was close to both the harbor and this town’s financial center, now known as Wall Street.  As the Revolutionary Was was brewing, Fraunces moved his family to Philadelphia and opened another tavern but he still owned what eventually became Fraunces Tavern.  It’s thought that he first met George Washington in 1776, but George didn’t employ Sam as his chief steward until 1789, the year he became President.  Fraunces oversaw the operation of the President’s house and selected food for his table.  When the Federal Government moved to Philadelphia in 1790, Samuel Fraunces moved too.  His service to the President ended in 1794 when he opened a new tavern in Philadelphia, where he died the next year.

Today, there’s a restaurant on the 1st floor of Fraunces Tavern, a preserved treasure in Lower Manhattan with a museum upstairs devoted to early American history and culture.   There are currently lots of pictures of George Washington, surely the most frequently depicted human at that time, there in a special exhibition.  A Russian diplomat named Pavel Svinin said in 1811, “Every American considers it his sacred duty to have a likeness of Washington in his house…”  Also in this museum, at least for now, is a panel from the coach that took Washington to his inauguration and one of Martha Washington’s slippers. 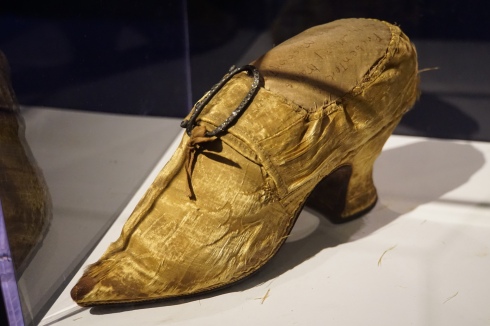 If you want to know more about early New York history, this is a great place to start.  I loved seeing the pre-Revolutionary War map of the city, the many flags on exhibit from this museum’s collection of 200 early American flags and standards, the period rooms, etc.

Ruth and I walked the short distance from Fraunces Tavern to Delmonico’s for lunch.

Since the beginning, I've had to avoid writing about the downside of travel in order to sell more than 100 articles. Just because something negative happened doesn't mean your trip was ruined. But tell that to publishers who are into 5-star cruise and tropical beach fantasies. I want to tell what happened on my way to the beach, and it may not have been all that pleasant. My number one rule of the road is...today's disaster is tomorrow's great story. My travel experiences have appeared in about twenty magazines and newspapers. I've been in all 50 states more than once and more than 50 countries. Ruth and I love to travel internationally--Japan, Canada, China, Argentina, Hungary, Iceland, Italy, etc. Within the next 2 years we will have visited all of the European countries. But our favorite destination is Australia. Ruth and I have been there 9 times. I've written a book about Australia's Outback, ALONE NEAR ALICE, which is available through both Amazon & Barnes & Noble. My first fictional work, MOVING FORWARD, GETTING NOWHERE, has recently been posted on Amazon. It's a contemporary, hopefully funny re-telling of The Odyssey. END_OF_DOCUMENT_TOKEN_TO_BE_REPLACED
This entry was posted on Friday, December 22nd, 2017 at 10:46 pm and posted in Undervalued Attraction. You can follow any responses to this entry through the RSS 2.0 feed.
« Surviving Faneuil Hall
Best of Year »