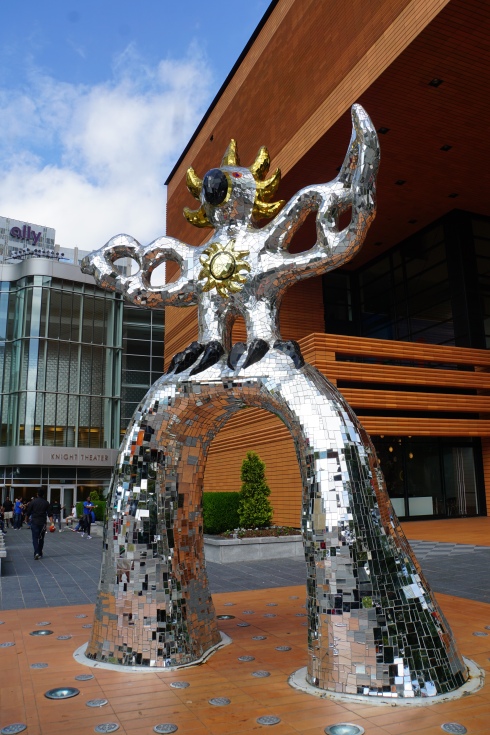 Charlotte, the largest city in The Carolinas, is named for Charlotte Sophia, the wife of King George III.  George was England’s King during the American Revolution and its longest-ruling monarch until Queen Victoria reigned for 63 years.  George was on the throne for 59 years.  That a city here would be named after a British Queen makes sense because Charlotte was settled by people from England.  There’s a statue of Charlotte Sophia Uptown, which is what residents call their downtown.

There’s now another important statue in Charlotte.  It’s called “Firebird”.  I had to wait to take a photo of it because there were several sets of parents posing their children with it.  Sculptor Nikki de Saint Phalle created Firebird.  Locals now call it their unofficial mascot.  It’s in front of the locally popular Bechtler Museum. 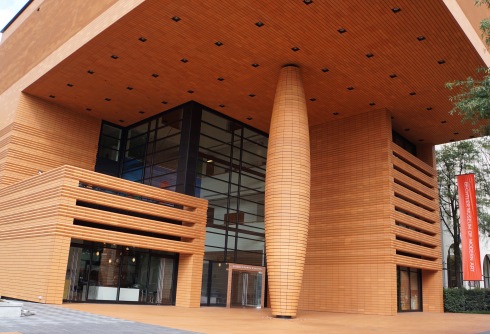 This museum displays the important Bechtler collection.   In 1950 a Swiss industrialist named Hans Bechtler and his wife Bessie began buying art.  They had a genuine eye for what would become valuable.   They bought Warhols, Picassos, etc.  Their son Andreas became a collector too, and he fell in love with Charlotte, an increasingly go go, high rise city.   After his parents died, Andreas gifted most of their collection to the city and hired a Swiss architect named Mario Botta to design a museum for it. 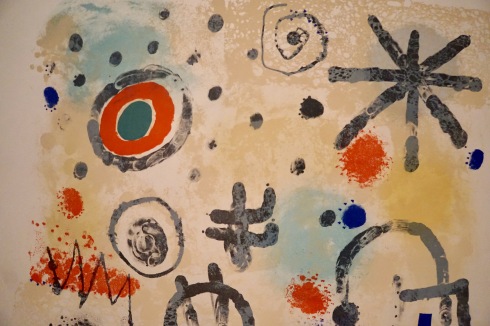 The Official Charlotte Visitors Guide says that “Charlotte can be both conventional and quirky” like the Bechtler’s childlike Joan Miró painting above.   We found conventional (the Billy Graham Library) and quirky (the Levine Museum of the New South) to aptly describe Charlotte.

Since the beginning, I've had to avoid writing about the downside of travel in order to sell more than 100 articles. Just because something negative happened doesn't mean your trip was ruined. But tell that to publishers who are into 5-star cruise and tropical beach fantasies. I want to tell what happened on my way to the beach, and it may not have been all that pleasant. My number one rule of the road is...today's disaster is tomorrow's great story. My travel experiences have appeared in about twenty magazines and newspapers. I've been in all 50 states more than once and more than 50 countries. Ruth and I love to travel internationally--Japan, Canada, China, Argentina, Hungary, Iceland, Italy, etc. Within the next 2 years we will have visited all of the European countries. But our favorite destination is Australia. Ruth and I have been there 9 times. I've written a book about Australia's Outback, ALONE NEAR ALICE, which is available through both Amazon & Barnes & Noble. My first fictional work, MOVING FORWARD, GETTING NOWHERE, has recently been posted on Amazon. It's a contemporary, hopefully funny re-telling of The Odyssey. END_OF_DOCUMENT_TOKEN_TO_BE_REPLACED
This entry was posted on Sunday, January 21st, 2018 at 10:07 pm and posted in North Carolina. You can follow any responses to this entry through the RSS 2.0 feed.
« Best Lists
The Paley Center for Media »