A few years ago in Washington, DC, I was so enamored of the National Museum of the American Indian that I went there 2 days in a row.  I returned so I could take a Highlights Tour with a Native American guide.  These excellent tours that meet on the bottom level last up to an hour.  Ask about them at the Welcome Desk.  This time in Washington, the National Museum of the American Indian was on our list of things to do, but it was near the bottom and I didn’t really expect to see it.   However, we saved time, went in, and I fell in love with it all over again.

Before looking at the exhibits, Ruth & I had lunch at the Mitsitam Native Foods Cafe, well prepared simple fare that was definitely different.  About half of what we saw upstairs was familiar.   By the time we saw both old and new, the National Museum of the American Indian became my favorite Smithsonian institution. The building alone is worth a visit.  Its curvilinear limestone design faces the rising sun and includes a major water feature that looks like a tidal creek flowing beside a Native American settlement.  The 40 large boulders outside are meant to remind visitors that Native Americans are one with their environment. They are called Grandfather Rocks.   An Architecture Fact Sheet is often available for those who inquire about this truly unique building.

The National Museum of the American Indian does mount new shows that are usually up for a long time.  My 2 favorites, “The Great Inka Road” and “Nation to Nation”, will still be there in the next decade.   The latter is on Level 4 and Inka is on Level 3.  The semi-permanent “Return to a Native Place”, which is about native communities in the DC area, is on the 2nd floor.  While browsing all exhibits, take the steps instead of the elevator.  Thanks to this building’s brilliant design, stair descenders get spectacular views of the Potomac Atrium on Level 1. 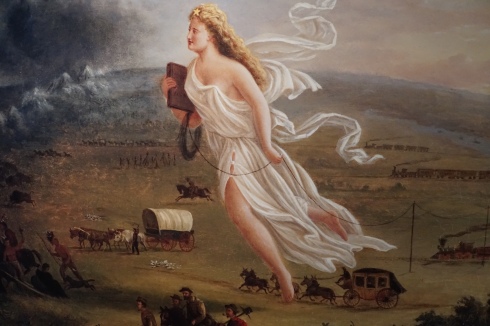 “Nation to Nation:  Treaties Between the United States and American Indian Nations” won’t disappear until the end of 2021.   Beginning in the colonial era and extending to the present, “Nation to Nation” explores the rocky history of government VS Native Nation diplomacy.   I really liked the way it contrasted  viewpoints.  For example, King Charles II claimed ownership of the Lenape homeland because his warships conquered Dutch colonists in 1664.  The Lenape people, who lived in what is now Pennsylvania and New Jersey, thought the land belonged to them because it was created when a great turtle rose out of the ocean and water ran off its back causing a tree to sprout in its center.  Shoots from that tree became a Lenape man and woman. 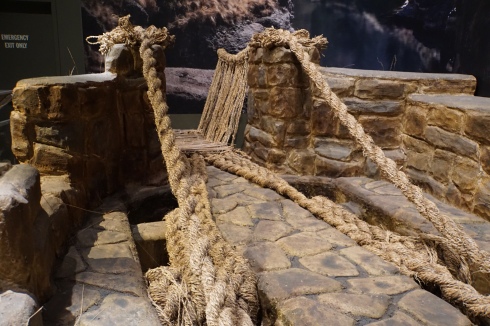 “The Great Inka Road:  Engineering an Empire” will be on view until the 1st of June, 2020.   Don’t spend much time in this exhibit if you suffer from vertigo because it focuses a lot on the grass bridges that natives erected to cross canyons.  Caravans of llamas accompanied the Inka using them.  This fine presentation points out that the Inka developed a 24,000 mile road network without iron or wheels.  Machu Picchu, built to be a royal residence, survived because the Inka learned how to channel water.

Don’t be surprised if your visit to the National Museum of the American Indian means less or no time spent in the National Gallery of Art.

Since the beginning, I've had to avoid writing about the downside of travel in order to sell more than 100 articles. Just because something negative happened doesn't mean your trip was ruined. But tell that to publishers who are into 5-star cruise and tropical beach fantasies. I want to tell what happened on my way to the beach, and it may not have been all that pleasant. My number one rule of the road is...today's disaster is tomorrow's great story. My travel experiences have appeared in about twenty magazines and newspapers. I've been in all 50 states more than once and more than 50 countries. Ruth and I love to travel internationally--Japan, Canada, China, Argentina, Hungary, Iceland, Italy, etc. Within the next 2 years we will have visited all of the European countries. But our favorite destination is Australia. Ruth and I have been there 9 times. I've written a book about Australia's Outback, ALONE NEAR ALICE, which is available through both Amazon & Barnes & Noble. My first fictional work, MOVING FORWARD, GETTING NOWHERE, has recently been posted on Amazon. It's a contemporary, hopefully funny re-telling of The Odyssey. END_OF_DOCUMENT_TOKEN_TO_BE_REPLACED
This entry was posted on Thursday, January 25th, 2018 at 10:31 pm and posted in Must See Attraction. You can follow any responses to this entry through the RSS 2.0 feed.
« The Paley Center for Media
Pleasant Penzance »