The Chalmette National Cemetery is in St. Bernard Parish 9 miles east of downtown New Orleans.  Now it’s surrounded by not-so-beautiful industries, like oil refineries and port facilities.  It, however, remains inspirational and worth a visit like other national cemeteries.

Abraham Lincoln signed the legislation creating national cemeteries for Civil War dead in 1862.  Chalmette came about 2 years later to bury Louisiana victims.  A sign at Chalmette says, “Nearly 12,000 Civil War-era troops are buried…about half of them unknown”.  However, an audio tour description that I picked up in a nearby National Park Service Visitor Center says, “Nearly 200 of the fallen are listed as unknown….”  That’s a huge difference!  Perhaps 5,800 of the fallen have, over time, been identified.  Another sign says there are 6,773 unknown.  Signage at the cemetery seemed old.  One stated that this cemetery contains almost 16,000 dead from the War of 1812 to Vietnam.  This was verifiable and I learned that only 4 men from the Battle of New Orleans fought in 1815 to conclude the War of 1812 are buried here, none of them British.  Most of the grave markers provide names and home states, and some even list branch of service and contain personal information.  Katrina destroyed the nearby visitor center that has a separate entrance and, I assume, damaged this cemetery; but it is well-groomed today and none of the markers indicate above-ground burials that are so common in New Orleans and nearby communities. 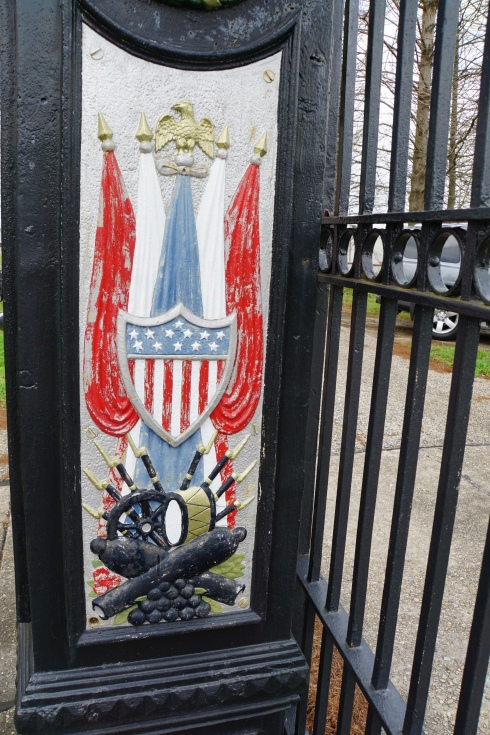 There’s a Civil War cannon atop a memorial at the far end of this cemetery with muzzles pointing upward to indicate that this area is now at peace.  The iron gates at Chalmette National Cemetery’s entrance are elaborately decorated and date from 1873.  Many massive live oaks trees dot the property.  There are few burial plots remaining and they are reserved for veterans’ widows.  As a result, funerals are now rare. 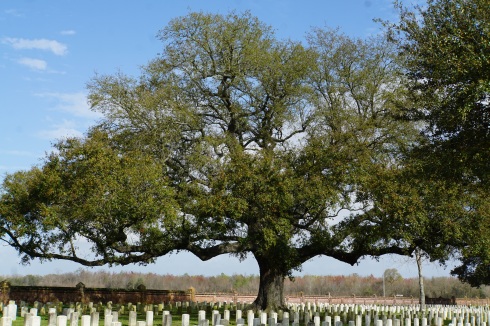 There’s an opening in the wall to allow visitors to enter the field where the Battle of New Orleans was fought.  There was a Freedmen’s Cemetery here at one time for slaves, but all traces of the folks once buried here vanished by the end of the 19th century.  The Visitor Center that was destroyed by the memorable 2005 hurricane has been rebuilt to tell the story of this most unusual battle in what is often called our 2nd war for independence.  The battle was won by the Americans after the treaty ending this war had already been signed.

Since the beginning, I've had to avoid writing about the downside of travel in order to sell more than 100 articles. Just because something negative happened doesn't mean your trip was ruined. But tell that to publishers who are into 5-star cruise and tropical beach fantasies. I want to tell what happened on my way to the beach, and it may not have been all that pleasant. My number one rule of the road is...today's disaster is tomorrow's great story. My travel experiences have appeared in about twenty magazines and newspapers. I've been in all 50 states more than once and more than 50 countries. Ruth and I love to travel internationally--Japan, Canada, China, Argentina, Hungary, Iceland, Italy, etc. Within the next 2 years we will have visited all of the European countries. But our favorite destination is Australia. Ruth and I have been there 9 times. I've written a book about Australia's Outback, ALONE NEAR ALICE, which is available through both Amazon & Barnes & Noble. My first fictional work, MOVING FORWARD, GETTING NOWHERE, has recently been posted on Amazon. It's a contemporary, hopefully funny re-telling of The Odyssey. END_OF_DOCUMENT_TOKEN_TO_BE_REPLACED
This entry was posted on Wednesday, February 28th, 2018 at 9:25 pm and posted in The South. You can follow any responses to this entry through the RSS 2.0 feed.
« New Orleans’ Voodoo Museum
There Are 2 Iwo Jima Memorials »