At the beginning of 2018 Mandalay Bay, the hotel in Las Vegas where a very disturbed man killed 58 people on October 1, 2017, renumbered its floors.  The 32nd floor was where the shooter rented a suite, so Mandalay Bay renamed floors 31 through 34 as 56 to 59.   This is not as strange as it sounds.  A local psychology professor, Michelle Paul, says it makes sense, and the hotel already had an unusual numbering system.  The tragedy that made our friend Alex cry has not been forgotten, but the hotel and Las Vegas in general have moved on.

Ruth and I tend to look for and appreciate the many Las Vegas attractions that are not on The Strip during our annual trip to visit friends, but this time we visited 2 Strip mainstays, the Bellagio and the Convention Center, to see if a city that depends on pleasing visitors seemed normal.  Both places were busy.  The Las Vegas Convention and Visitors Authority has opened a new and helpful info center that is much smaller than its old one, and a large convention with lots of human traffic was in progress.  The Bellagio had begun a spring celebration in its very popular Conservatory, and it was full of awed people taking photos.

This is a free attraction and if you can limit your visit to an hour, which is possible, you can park free in The Bellagio’s gargantuan garage.  The Bellagio’s Conservatory/Botanical Garden puts on 5 seasonally themed shows every year that celebrate the 4 seasons and Chinese New Year.  This season’s theme is “Japanese Spring”.  It will be there until June 3.  Over the Memorial Day weekend a summer show will replace it.  Typically Las Vegas extravagant, the spring show offers oversized pink lilies and gardens of real flowers, koi, a teahouse, birds, cherry tree blossoms, etc.  The enormous vases were my favorite part. 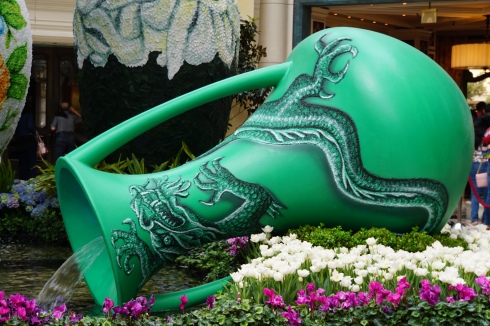 The Bellagio clearly hires the best horticulturalists and designers to put on these shows that entertain hordes of people of all ages and cultures.

Since the beginning, I've had to avoid writing about the downside of travel in order to sell more than 100 articles. Just because something negative happened doesn't mean your trip was ruined. But tell that to publishers who are into 5-star cruise and tropical beach fantasies. I want to tell what happened on my way to the beach, and it may not have been all that pleasant. My number one rule of the road is...today's disaster is tomorrow's great story. My travel experiences have appeared in about twenty magazines and newspapers. I've been in all 50 states more than once and more than 50 countries. Ruth and I love to travel internationally--Japan, Canada, China, Argentina, Hungary, Iceland, Italy, etc. Within the next 2 years we will have visited all of the European countries. But our favorite destination is Australia. Ruth and I have been there 9 times. I've written a book about Australia's Outback, ALONE NEAR ALICE, which is available through both Amazon & Barnes & Noble. My first fictional work, MOVING FORWARD, GETTING NOWHERE, has recently been posted on Amazon. It's a contemporary, hopefully funny re-telling of The Odyssey. END_OF_DOCUMENT_TOKEN_TO_BE_REPLACED
This entry was posted on Thursday, March 29th, 2018 at 9:53 pm and posted in Nevada. You can follow any responses to this entry through the RSS 2.0 feed.
« Crystals
The Thorne Rooms »