Narcissa Thorne was born in Indiana.  When she became Mrs. James Ward Thorne, she was financially set for life because he was a Montgomery Ward heir.  Over the next several years she developed an interest in miniature rooms and began creating them.  Several of them ended up in Chicago’s Art Institute, where Ruth and I saw them several times.   I thought they were only there.  That’s why I was surprised to find several of them on permanent display in the Phoenix Art Museum this week.  I learned from the staff that they were personal gifts from Narcissa, and that this popular tourist attraction has the world’s 2nd largest collection of these unique rooms.

Narcissa Thorne had no formal training in architecture or interior design.  A talented amateur, she was able to hire workers with skills to help her realize 100 one-of-a-kind rooms over a 10 year period.  It took 30 to 40 people to construct each one in exacting detail.  Each one was based on Narcissa Thorne’s extensive notes and files.  Her rooms were exhibited at world fairs and in London’s Victoria and Albert Museum.  Magazine articles praised them.  The Phoenix Art Museum has 20.  The Knoxville Museum of Art has 9.  The Art Institute has 68 of them on continuous display.

Narcissa’s miniature rooms show incredible detail, range from the year 1600 to 1940, and are on a scale of 1 inch to 1 foot.   Several are modeled on actual rooms, but many just reflect a period like the French Directoire Room below, which she copied from a French watercolor.   The one up top shows an art deco hall from 1925.  It’s my favorite.  People who see these rooms are fascinated by her exacting detail and historical precision.  One clock actually runs.  A tea tray was made from a single copper penny.   She collected miniature furniture and household items during travels to Europe, Asia, etc.  She had period-style rugs woven.  Chest drawers open with tiny keys. 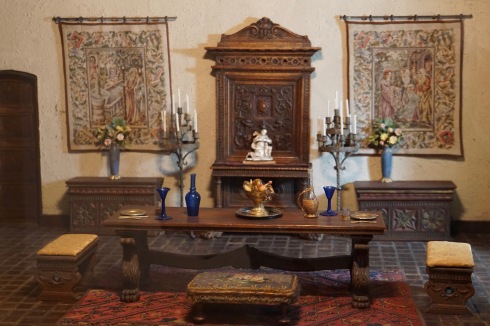 Her Italian Dining Room is a masterpiece of invention.  The silverware on the table came from Roman and Florentine antique shops, and the 2 chests under the tapestries were Narcissa’s only attempt at wood carving.  She was driven to do these rooms and never received any financial compensation for them.

Since the beginning, I've had to avoid writing about the downside of travel in order to sell more than 100 articles. Just because something negative happened doesn't mean your trip was ruined. But tell that to publishers who are into 5-star cruise and tropical beach fantasies. I want to tell what happened on my way to the beach, and it may not have been all that pleasant. My number one rule of the road is...today's disaster is tomorrow's great story. My travel experiences have appeared in about twenty magazines and newspapers. I've been in all 50 states more than once and more than 50 countries. Ruth and I love to travel internationally--Japan, Canada, China, Argentina, Hungary, Iceland, Italy, etc. Within the next 2 years we will have visited all of the European countries. But our favorite destination is Australia. Ruth and I have been there 9 times. I've written a book about Australia's Outback, ALONE NEAR ALICE, which is available through both Amazon & Barnes & Noble. My first fictional work, MOVING FORWARD, GETTING NOWHERE, has recently been posted on Amazon. It's a contemporary, hopefully funny re-telling of The Odyssey. END_OF_DOCUMENT_TOKEN_TO_BE_REPLACED
This entry was posted on Friday, March 30th, 2018 at 11:43 pm and posted in Arizona. You can follow any responses to this entry through the RSS 2.0 feed.
« Las Vegas Carries On
Victorville »