The people you meet while traveling can totally change your perception of a place.  Estero-Llano Grande State Park was less than grand for Ruth and me until we took an afternoon tram tour of it with Tom and Connie.  Tom drove and let us use his powerful telescope.   Connie, his wife, provided much of the commentary.   Both knew this park extremely well and helped us to understand and appreciate it like they do.   Songbirds sing in April.   Dragonflies abound.  The best month to be here for butterflies is November.  Normally, Tom and Connie’s tour focuses on habitats, but on that day in February they concentrated on birds because this was, according to them, the best month of the year to spot lots of avian species in this small but important State Park that is now part of the World Birding Center network. 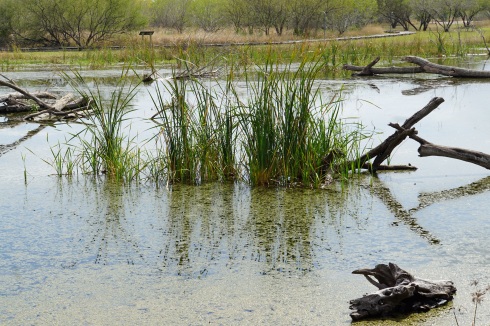 Estero Llano is relatively new.  Until June, 2006 it was a trailer park with nearby citrus trees.  Some of its residents have been allowed to remain.   Estero in Spanish means a marshy estuary and a llano is a grassy plain.   Tom aptly described this Park as “a big, wide open area with ponds”.   On our tour we saw lots of native live oaks, a blooming elbow cactus (below), and an impressive thorn forest; but the star of the day was a Roseate Spoonbill.   This Park’s signature bird species, however, is the well-hidden Common Pauraque.  With help, I was able to spot and photograph a sleeping one near a trail.

Estero-Llano Grande is known for shallow lakes, woodlands, and wildlife, like resident alligators that can often be seen at Alligator Lake.  It has one of the oldest remnants of native thorn forest called Tamaulipah in this area.  Tom and Connie told us that thorn forest takes up 1/3 of the Park, which is on Llano Grande Lake 4 miles from the Rio Grande River. 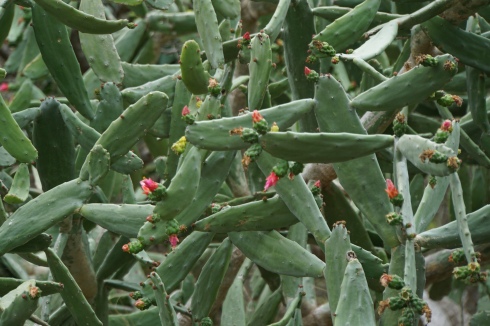 A large, shady viewing deck adjacent to the visitor center is a very popular hangout spot after exploring this Park’s boardwalks and 5 miles of trail or while waiting for a tour.  On this deck, avid birders record the birds they have spotted that day.  In less than 7 years, 326 bird species were listed.  It’s a no-brainer that Estero-Llano is a favorite destination among master birdwatchers.

The town closest to Estero-Llano Grande State Park, which contains the largest wetlands environment in the 9 area facilities associated with the World Birding Center, is Weslaco in the Rio Grande Valley.  The State of Texas has incredibly diverse state parks like Palo Duro Canyon and Mustang Island.   Less than 200 acres, Ester-Llano seems much larger when you’re on a tour of it with Tom and Connie.

Since the beginning, I've had to avoid writing about the downside of travel in order to sell more than 100 articles. Just because something negative happened doesn't mean your trip was ruined. But tell that to publishers who are into 5-star cruise and tropical beach fantasies. I want to tell what happened on my way to the beach, and it may not have been all that pleasant. My number one rule of the road is...today's disaster is tomorrow's great story. My travel experiences have appeared in about twenty magazines and newspapers. I've been in all 50 states more than once and more than 50 countries. Ruth and I love to travel internationally--Japan, Canada, China, Argentina, Hungary, Iceland, Italy, etc. Within the next 2 years we will have visited all of the European countries. But our favorite destination is Australia. Ruth and I have been there 9 times. I've written a book about Australia's Outback, ALONE NEAR ALICE, which is available through both Amazon & Barnes & Noble. My first fictional work, MOVING FORWARD, GETTING NOWHERE, has recently been posted on Amazon. It's a contemporary, hopefully funny re-telling of The Odyssey. END_OF_DOCUMENT_TOKEN_TO_BE_REPLACED
This entry was posted on Saturday, April 7th, 2018 at 9:12 pm and posted in Texas. You can follow any responses to this entry through the RSS 2.0 feed.
« A Lost Nevada City
Canyon De Chelly: Use All Senses »