The word most used to describe the original McDonald’s location museum in San Bernardino is “fun”.  This is accurate for a place that hopes to one day get into the Guinness World Records for having the most kitschy toys.   It’s already well on its way to achieving that goal.   Despite the controversy it engenders, this fun attraction, unlike the city it’s in, is an OK travel stop.   One TripAdvisor reviewer from Seattle also noticed its “Toys Galore!” appeal and reported that the production company creating the movie The Founder borrowed some cool artifacts, like the Speedee sign on the roof, from this museum.  This sign appears in the movie even though the McDonald’s outlet recreated for the film was in Georgia.  They did this for authenticity and despite the controversy

I was not aware of the controversy until I saw that sign near the museum’s entrance that called it “unofficial”.   Way back in 1937 the McDonald brothers went into the restaurant business in Monrovia, CA.  In the 1940s Dick McDonald noticed that 80% of their sales were hamburgers and fries, so he and his brother Mac (Maurice) opened McDonald Hamburgers featuring their Speedee sign in San Bernardino.  The burgers cost 15¢ and the fries 10¢.  In 1954 they opened #4 in Downey, CA, which remains “the oldest existing McDonald’s in the world according to the “McDonald’s History” published by Albert Okura,  current owner of this “unofficial” attraction.

Despite the fact that it’s at the original MacDonald’s location, this museum now specializing in its early years is not the official McDonald’s museum.  According to themysteriousworld.com, McDonald’s is “the largest fast food chain in the world” despite the fact that Subway (#3) reportedly has 7,000 more outlets, creating another controversy.   The official McDonald’s Museum is in Des Plaines, IL, where Ray Kroc’s 1st store came along in 1955.  Probably carrying a shake mixer, Ray Kroc visited the McDonald brothers in San Bernardino and convinced them to allow him to franchise their name.  Six years later Ray Kroc convinced the brothers to sell him the rights to the fast food stores with their name on them.  Kroc’s Des Plaines location was actually the 9th McDonald’s but his 1st, so it’s considered the official McDonald’s Museum. 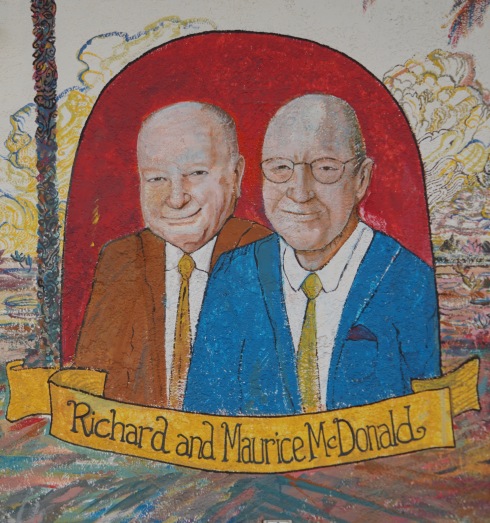 Trivia.  The 1st McDonald’s with golden arches was in Phoenix.   The largest group of foreign visitors to this museum in San Bernardino, according to its Assistant Curator Marvin Hernandez, come from Brazil.  They seek it out because they’re following old Route 66 backwards, according to Bobby Troup, from Santa Monica to Chicago.  Jay Leno and Pink are both former McDonald’s employees.

Since the beginning, I've had to avoid writing about the downside of travel in order to sell more than 100 articles. Just because something negative happened doesn't mean your trip was ruined. But tell that to publishers who are into 5-star cruise and tropical beach fantasies. I want to tell what happened on my way to the beach, and it may not have been all that pleasant. My number one rule of the road is...today's disaster is tomorrow's great story. My travel experiences have appeared in about twenty magazines and newspapers. I've been in all 50 states more than once and more than 50 countries. Ruth and I love to travel internationally--Japan, Canada, China, Argentina, Hungary, Iceland, Italy, etc. Within the next 2 years we will have visited all of the European countries. But our favorite destination is Australia. Ruth and I have been there 9 times. I've written a book about Australia's Outback, ALONE NEAR ALICE, which is available through both Amazon & Barnes & Noble. My first fictional work, MOVING FORWARD, GETTING NOWHERE, has recently been posted on Amazon. It's a contemporary, hopefully funny re-telling of The Odyssey. END_OF_DOCUMENT_TOKEN_TO_BE_REPLACED
This entry was posted on Wednesday, April 18th, 2018 at 9:59 pm and posted in California. You can follow any responses to this entry through the RSS 2.0 feed.
« Hangar B in Tillamook
Passing Through Quartzsite »