I’ve always maintained that Sydney, Australia, is on the most beautiful harbor in the world; and there’s a new, 18-month-old reserve on it.  At the entrance to Darling Harbor, which has a number of major tourist attractions along its shore, Barangaroo Reserve is being called a “harbour foreshore park” and is already well used by bikers, runners, and walkers.  It replaces an eyesore, an industrial site in the form of a concrete container terminal.  Barangaroo converts close to 15 acres just west of and within walking distance from The Rocks, Sydney’s oldest colonial neighborhood, into a headland with a winding path named the Wulugul Walk around it.  There are rocky inlets at either end of Wulugul, which is below a rise with the wonderfully named Stargazer Walk atop the outcrop.  It’s not as dangerous as visitors are led to believe. 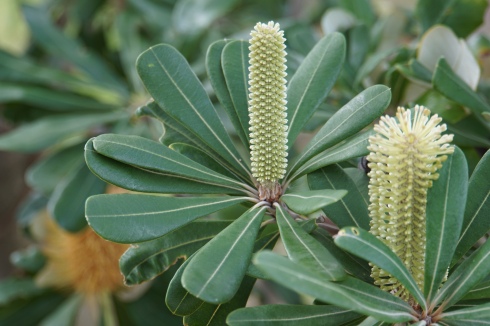 This harbor headland now looks like what a lot of Australia used to look like before European settlers arrived and honors an Aboriginal woman named Barangaroo.  During Barangaroo Reserve’s design, 75,000 trees and native shrubs like Banksia were envisioned and planted.  All of them are pre-settlement flora.  Barangaroo was a Cammeraygal woman from colonial times.  She was Bennelong’s 2nd wife and, like him, was a go between for native Aboriginals and the growing colonial community.  Bennelong  traveled to England to see the sights. 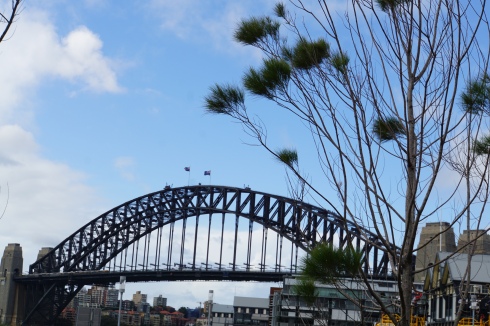 In addition to the natural Sydney harbor and many sleek skyscrapers, Barangaroo users will also see both the Old Coathanger, the nickname for the old Sydney Harbor Bridge, and the modern ANZAC span.  The ANZAC bridge is an 8-lane cable-stayed construction between Pyrmont and Glebe Island that opened for traffic in 1995.  They will also see lots of Sydney sandstone.  A record amount of it was used to create Barangaroo.  This Reserve will be on a new metro line that will go into service in 2019.    Much of George Street is currently closed downtown as this new rail system is being installed.  However, it’s currently behind schedule.

Since the beginning, I've had to avoid writing about the downside of travel in order to sell more than 100 articles. Just because something negative happened doesn't mean your trip was ruined. But tell that to publishers who are into 5-star cruise and tropical beach fantasies. I want to tell what happened on my way to the beach, and it may not have been all that pleasant. My number one rule of the road is...today's disaster is tomorrow's great story. My travel experiences have appeared in about twenty magazines and newspapers. I've been in all 50 states more than once and more than 50 countries. Ruth and I love to travel internationally--Japan, Canada, China, Argentina, Hungary, Iceland, Italy, etc. Within the next 2 years we will have visited all of the European countries. But our favorite destination is Australia. Ruth and I have been there 9 times. I've written a book about Australia's Outback, ALONE NEAR ALICE, which is available through both Amazon & Barnes & Noble. My first fictional work, MOVING FORWARD, GETTING NOWHERE, has recently been posted on Amazon. It's a contemporary, hopefully funny re-telling of The Odyssey. END_OF_DOCUMENT_TOKEN_TO_BE_REPLACED
This entry was posted on Tuesday, May 29th, 2018 at 9:13 pm and posted in New South Wales. You can follow any responses to this entry through the RSS 2.0 feed.
« Heavenly Haigh’s
Unexpected Island »