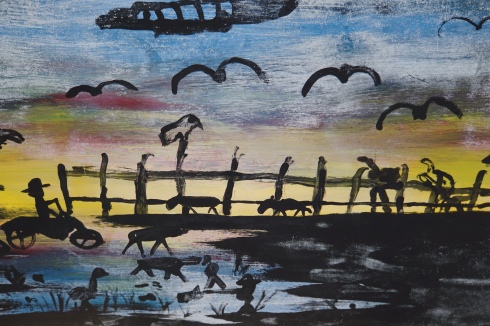 Sometimes when I’m in a new place, I have a hard time liking it.  Bad things happen–an awful accommodation, intense heat, flies, less than stellar attractions, etc.  But then when I leave I can’t get the place out of my mind.  Its singular nature haunts me.  Such a place is Broken Hill, Australia.

On the other side of New South Wales and far from vivid Sydney, Broken Hill is close to the barren, desert like part of South Australia. It has a very Outback atmosphere.  At one time Lonely Planet said that this town had “an extremely unwelcoming environment.”  A remote city that was for a brief time the wealthiest community in the world, Broken Hill now has the look of a place that has seen better days.  And it has.

It was once a mining superstar.  At one time one-third of the world’s supply of silver was mined in Broken Hill.  The huge mining company, BHP Billiton, got its start here.  Established in 1883, Broken Hill’s population as recently as the 1960s exceeded 30,000 people.  Today it’s down to around 17,000 according to a local man named Ross who worked in the mines for more than 50 years.  He told me that Broken Hill would probably lose another 4,000 residents soon unless the recently discovered cobalt deposit becomes a factor in the production of lithium batteries.

Broken Hill is surrounded by closed mines like The Daydream and almost ghost towns like Silverton.  Locals speak of coming water issues and intense heat.  Ironically, the entire town was almost destroyed by an unprecedented hail storm last November.  I was not surprised to learn that apocalyptic films like Mad Max II come here to shoot.  Today’s locals, however, were still talking about their big cultural event of the year, which had occurred the previous week–Agfair.   Its chairman raved about every locals’ opportunity “to see the latest in agricultural methods and technology”.  I know this because I have the Official Program.

I liked a couple of Broken Hill’s attractions, like it’s School of the Air.  Ruth and I had visited another of these facilities on a previous Outback trip.  At that time, big technological changes were coming, and I wanted to see their effect on 2018’s education.  The Visitor Centre arranged for us to visit for a small fee.  This is the only way for outsiders to get in. Such schools function all over The Outback because many children live on isolated homesteads and ranches that are not close to regular schools.   The Broken Hill facility has 12 teachers who present lessons to these children via satellite linkage.  The lesson that we sat in on was prepared in Sydney and broadcast to a few 3rd graders on a very remote property.  All School of the Air teachers experience one home visit per year, and the children come to Broken Hill occasionally.   Schools of the Air teach from preschool to 6th grade students.  Art is both important and everywhere in the schools I have visited, and the library in Broken Hill looked well-used.

Since the beginning, I've had to avoid writing about the downside of travel in order to sell more than 100 articles. Just because something negative happened doesn't mean your trip was ruined. But tell that to publishers who are into 5-star cruise and tropical beach fantasies. I want to tell what happened on my way to the beach, and it may not have been all that pleasant. My number one rule of the road is...today's disaster is tomorrow's great story. My travel experiences have appeared in about twenty magazines and newspapers. I've been in all 50 states more than once and more than 50 countries. Ruth and I love to travel internationally--Japan, Canada, China, Argentina, Hungary, Iceland, Italy, etc. Within the next 2 years we will have visited all of the European countries. But our favorite destination is Australia. Ruth and I have been there 9 times. I've written a book about Australia's Outback, ALONE NEAR ALICE, which is available through both Amazon & Barnes & Noble. My first fictional work, MOVING FORWARD, GETTING NOWHERE, has recently been posted on Amazon. It's a contemporary, hopefully funny re-telling of The Odyssey. END_OF_DOCUMENT_TOKEN_TO_BE_REPLACED
This entry was posted on Saturday, June 2nd, 2018 at 11:44 pm and posted in Difficult Destination, New South Wales. You can follow any responses to this entry through the RSS 2.0 feed.
« On to Darwin
Lanes and Places »