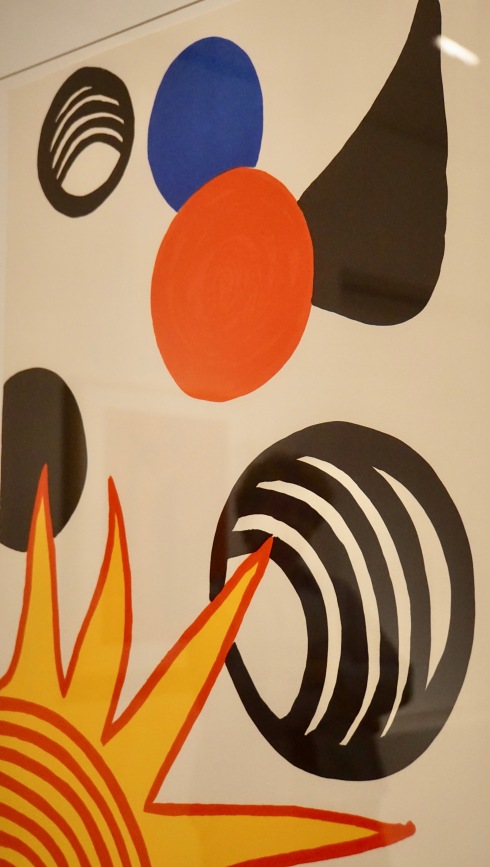 Alexander Calder was a contemporary of Olive Pink, the one-of-a-kind woman whom I wrote about yesterday.  The love of her life was an all-Australian botanic garden in the middle of The Outback.  The love of his life was mobiles.  Or maybe it was his circus.  He was an engineer who created art objects that moved.   They were called mobiles, a word he invented.  Parents frequently hang mobiles in their baby’s room to stimulate an understanding of space with sometimes moving, colorful objects. 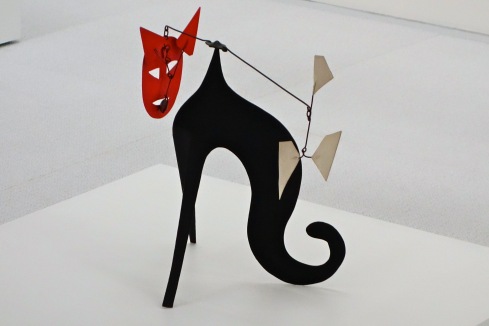 I had only seen Alexander Calder’s moving mobiles in films until Ruth & I saw an exhibit of his sculptures at the Whitney Museum in New York last year called “Hypermobility”.  At noon, someone activated a few of them with a stick and they danced around as if motorized.  They were not.  Calder carefully crafted them in such a way that they seemed to move on their own.  Early in life Calder decided to become a mechanical engineer, studied at Stevens Institute of Technology, and earned an engineering  degree.  Later he applied what he learned to small and large sculptures.   Many years ago I repeatedly saw a film of him in which he, like the perfect grandfather, manipulated wire circus performers he had created to entertain guests in his house in France.  The Whitney had it on display in its old museum.  Calder died in 1976.  Olive Pink died in 1975.

There are frequent exhibits of Alexander Calder’s works.  Earlier this year Ruth and I went to the Phoenix Art Museum because it had an exhibit called “Alexander Calder: An Outburst of Color”.   I found it oddly displayed in a conference room that was occupied when we arrived.   We couldn’t see it.  When we were ready to leave, we circled back to the room.  The people had left and it was empty, but there was still a guard at the door.  I asked her if we could see the Calders.  She checked with someone and let us in.  They were typical of his work, in other words delightfully childlike.

On the way out I spoke to the lady in the gift shop.   I asked her where the Calder show, which was about to end, would go next.   “Back into storage,” she told me.  As it turned out, all of the framed Calders on display were owned by…the Phoenix Art Museum.   She told me that they almost always had some of their impressive collection of Calders on view.  That explained why they were hung on walls in a conference-meeting room.

Has anyone else besides me seen and been delighted by Cirque Calder?

Since the beginning, I've had to avoid writing about the downside of travel in order to sell more than 100 articles. Just because something negative happened doesn't mean your trip was ruined. But tell that to publishers who are into 5-star cruise and tropical beach fantasies. I want to tell what happened on my way to the beach, and it may not have been all that pleasant. My number one rule of the road is...today's disaster is tomorrow's great story. My travel experiences have appeared in about twenty magazines and newspapers. I've been in all 50 states more than once and more than 50 countries. Ruth and I love to travel internationally--Japan, Canada, China, Argentina, Hungary, Iceland, Italy, etc. Within the next 2 years we will have visited all of the European countries. But our favorite destination is Australia. Ruth and I have been there 9 times. I've written a book about Australia's Outback, ALONE NEAR ALICE, which is available through both Amazon & Barnes & Noble. My first fictional work, MOVING FORWARD, GETTING NOWHERE, has recently been posted on Amazon. It's a contemporary, hopefully funny re-telling of The Odyssey. END_OF_DOCUMENT_TOKEN_TO_BE_REPLACED
This entry was posted on Saturday, June 16th, 2018 at 9:02 pm and posted in Arizona. You can follow any responses to this entry through the RSS 2.0 feed.
« An Outspoken Advocate Named Pink
A Genuine Magician »