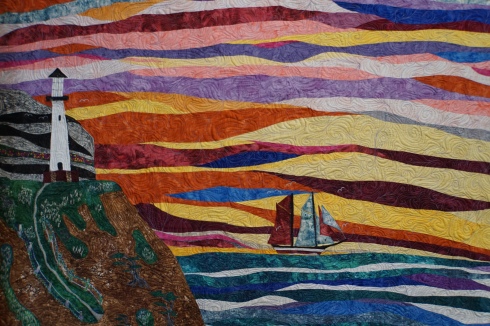 I met a very complex man yesterday named Victor Claude Pirte.  Pirte is a Viet Nam Vet and Fabric Artist who lives in Portland, OR.  I met him at the Latimer Quilt & Textile Center in Tillamook, OR.  Ruth and I were in Tillamook again to learn about this Center.  Pirte was at Latimer because his first show opens there today.

Pirte has been making fabric art like the lighthouse scene above for several years.  He showed me another personal design that will be in the show, which is very much like a Van Gogh painting.  Both would be, ideally, framed and placed on a wall like a genuine Van Gogh.  Pirte told me that the one reminiscent of Van Gogh took him a year to craft.  It was atop a pile of his creations that will be displayed in the Latimer Quilt and Textile Center beginning on June 24, 2018, and for the next month.  All will be available for sale, and none of them have been on the market until now.  He told me that it’s time and that he’s ready to let go of the 54 designs he has crafted.  Contact the Latimer–503-842-8622–for more information.

The Latimer Quilt and Textile Center’s building began as a school built in 1900.    The current building was erected in the 1930s and became a maintenance facility in 1959.  The Latimer family donated the property to the Tillamook County Pioneer Museum Family in memory of previous generations; and the Friends of the Latimer Quilt & Textile Center, seeing the need for such a center in the Northwest, formed in 1991.  This excellent attraction has grown over time into a bustling, multi-room, non-profit facility that promotes and displays all textile arts.  Weavers and quilters are at work here daily.  One room contains several looms.  There are books and magazines about quilting, etc., everywhere with lots of things for sale. Ruth was especially taken by the woven bag below.  Because the Latimer Quilt & Textile Center is in Oregon, there’s no sales tax on purchases.

In 2009 The Latimer partnered with some local organizations to begin a Tillamook Quilt Trail.  These trails are, apparently, popular in the Northeast United States.  I don’t have any information about this ongoing quilt trail, but as a result of it The Latimer ends up placing quilt patterns in many locations.  There’s something related going on in the town of Cascade Locks up in the gorgeous Columbia Gorge that Ruth and I plan to explore very soon.  This was our first visit to the Latimer, so we still have a lot to learn.  I guess we’ll have to go back.  In the meantime, Good Luck, Victor Claude Pirte!

ps  “Rhapsody of Flowers” was created by Helen Stewart.

Since the beginning, I've had to avoid writing about the downside of travel in order to sell more than 100 articles. Just because something negative happened doesn't mean your trip was ruined. But tell that to publishers who are into 5-star cruise and tropical beach fantasies. I want to tell what happened on my way to the beach, and it may not have been all that pleasant. My number one rule of the road is...today's disaster is tomorrow's great story. My travel experiences have appeared in about twenty magazines and newspapers. I've been in all 50 states more than once and more than 50 countries. Ruth and I love to travel internationally--Japan, Canada, China, Argentina, Hungary, Iceland, Italy, etc. Within the next 2 years we will have visited all of the European countries. But our favorite destination is Australia. Ruth and I have been there 9 times. I've written a book about Australia's Outback, ALONE NEAR ALICE, which is available through both Amazon & Barnes & Noble. My first fictional work, MOVING FORWARD, GETTING NOWHERE, has recently been posted on Amazon. It's a contemporary, hopefully funny re-telling of The Odyssey. END_OF_DOCUMENT_TOKEN_TO_BE_REPLACED
This entry was posted on Sunday, June 24th, 2018 at 6:29 pm and posted in The Oregon Coast. You can follow any responses to this entry through the RSS 2.0 feed.
« Walls
Like Being in Greece »