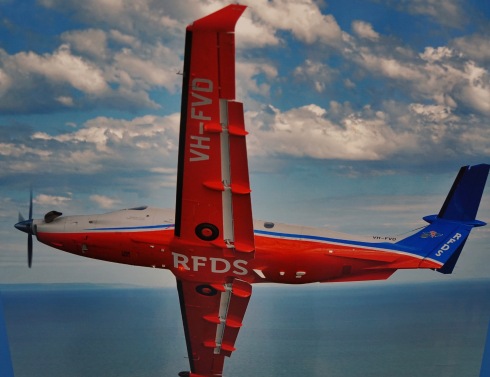 Australia is like no other landmass on the globe.  Its interior, the amorphous Outback, is hot and mostly devoid of towns and people.   Alice Springs, more or less the Outback’s capital, has only 25,000 inhabitants.  It was here that in 1939 the Royal Flying Doctor Service (RFDS) established a working base that became very important to the health of Outback residents.  Their medical care in one of the world’s most isolated regions was dependent on it.

Ruth and I visited this museum/base while in Alice Springs in April, 2018, to learn even more about this truly unique service in the world of medical care that began in 1928 as the Aerial Medical Service.   This facility is devoted to telling the story of the Reverend John Flynn, its founder, and explicate the Royal Flying Doctors’ mission.  It’s in a structure that was once behind the original communications and residential building of the Alice Springs facility.

There are many stories.  One of my favorites is how the RFDS got its start.  In 1917 stockman Jimmy Darcy’s horse stumbled.   Thrown hard, Jimmy was missed by his mates who found him badly injured.  A buggy was prepared to haul him 300 miles to Halls Creek where the only person who might treat him, Fred Tuckett, a Bush Doctor, was.  Urgent surgery for a ruptured bladder was performed.  Tuckett performed this operation without instruments or anesthetic.  Darcy’s condition did not improve.  A Doctor Holland was summoned.  It took him several days to get to Halls Creek.  “How’s the patient?” Holland inquired of Tuckett.  “He died yesterday,” was Tuckett’s reply.  Malaria had killed Darcy.   The RFDS began to deal with similar emergencies.

The November edition of AirDoctor reported that so far this year The Royal Flying Doctor Service had assisted 51,231 patients, one person every 10 minutes.  A screen in the Alice Springs facility showed flights in progress responding to potential, medical emergencies from the RFDS’s 25 bases around Outback Australia.  There were 7 flights in the air. There are now 70 aircraft being used.  They are single-engine Swiss planes and one jet owned by the mining Company Rio Tinto.  Should medical care be needed, it and patient transfers are free under Australian Medicare.  The government picks up 80% of the cost. The first plane used was a DeHavilland DH 50.  Planes are now replaced every 10 years.

One more story.  The RFDS played a key role in a mass emergency in September, 2018, when there was a big explosion at an Alice Springs drag race.  Burning fuel was sprayed onto 11 spectators.  The 2 most severely burned victims brought to the Alice Springs hospital needed to be flown to Adelaide for emergency treatment.  The 16 hour road trip was reduced to 3 flight hours.

This service mixes heroism and need.

The quilted mountains below are by Jocelyne Leath and accurately depict my favorite place in Australia, The Bungle Bungles.

Since the beginning, I've had to avoid writing about the downside of travel in order to sell more than 100 articles. Just because something negative happened doesn't mean your trip was ruined. But tell that to publishers who are into 5-star cruise and tropical beach fantasies. I want to tell what happened on my way to the beach, and it may not have been all that pleasant. My number one rule of the road is...today's disaster is tomorrow's great story. My travel experiences have appeared in about twenty magazines and newspapers. I've been in all 50 states more than once and more than 50 countries. Ruth and I love to travel internationally--Japan, Canada, China, Argentina, Hungary, Iceland, Italy, etc. Within the next 2 years we will have visited all of the European countries. But our favorite destination is Australia. Ruth and I have been there 9 times. I've written a book about Australia's Outback, ALONE NEAR ALICE, which is available through both Amazon & Barnes & Noble. My first fictional work, MOVING FORWARD, GETTING NOWHERE, has recently been posted on Amazon. It's a contemporary, hopefully funny re-telling of The Odyssey. END_OF_DOCUMENT_TOKEN_TO_BE_REPLACED
This entry was posted on Tuesday, August 7th, 2018 at 8:39 pm and posted in Australia. You can follow any responses to this entry through the RSS 2.0 feed.
« Vore Buffalo Jump
The Pioneer Memorial Museum Is Not Obscure »