Hahndorf is a village in the Adelaide Hills of South Australia.  Many consider it a must-see attraction.  I think it’s worth lunch and a stroll.  It’s certainly easy to get to from the city.  The 864 bus took Ruth & me there scenically in 45 minutes from the Rundle Mall, Adelaide’s main pedestrian street devoted to shopping, for $3.50.

Hahndorf was historically important.   It was a planned community specifically for non-British immigrants and is now the oldest German town in Australia.  Its 1st citizens came from Prussia to avoid religious persecution for their rigid Lutheran beliefs.  They traveled there on a ship called the Zebra, apparently not rechristened The Kangaroo, in 1838.    Their captain was Dane Dirk Hahn.  They had to walk to the Hahndorf town site from Port Adelaide carrying all of their possessions. Driven, they had already built their 1st Lutheran church by 1840.  It no longer exists.  If fact, very little of the 19th century town remains.  The present-day German village is far more fantasy than reality, and be prepared to see lots of cuckoo clocks and quasi-German stuff for sale.   The Hahndorf Inn Hotel, where Ruth and I had lunch, was established in 1863.  One tourist description said that it retained its German culture in its beer and European cuisine.  It was OK.  The German Village Shop was strictly a window-shopping endeavor for us.

Hahndorf is now known as an artsy town.  There are sculptures like the jeans-clad legs along its main street.  One of Australia’s most revered painters, Hans Heysen, settled here in a retreat he called The Cedars.  Born in Germany in 1877, Heysen lived a long life, dying in 1964.   He won the Wynne Prize, one of Australia’s most prestigious awards, a record 9 times.  I first heard his name in the Flinders Mountains, a magical place that he visited 11 times to paint.   An example of his work, a painting in Sydney’s main art gallery called “The coming home”, is below and typical of his output.

A lot of the people visiting Hahndorf are there for the day to sample the Adelaide Hills’ excellent cool-climate wines.  There have been European wine makers in the area since 1836, and there are at least 50 cellar doors, the Australian term for visitable wineries, around Hahndorf.   Wine from the Adelaide region was reportedly sent to Queen Victoria in 1844.  Her reaction to it is not known. 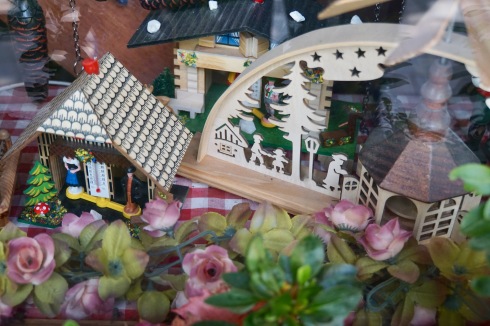 Since the beginning, I've had to avoid writing about the downside of travel in order to sell more than 100 articles. Just because something negative happened doesn't mean your trip was ruined. But tell that to publishers who are into 5-star cruise and tropical beach fantasies. I want to tell what happened on my way to the beach, and it may not have been all that pleasant. My number one rule of the road is...today's disaster is tomorrow's great story. My travel experiences have appeared in about twenty magazines and newspapers. I've been in all 50 states more than once and more than 50 countries. Ruth and I love to travel internationally--Japan, Canada, China, Argentina, Hungary, Iceland, Italy, etc. Within the next 2 years we will have visited all of the European countries. But our favorite destination is Australia. Ruth and I have been there 9 times. I've written a book about Australia's Outback, ALONE NEAR ALICE, which is available through both Amazon & Barnes & Noble. My first fictional work, MOVING FORWARD, GETTING NOWHERE, has recently been posted on Amazon. It's a contemporary, hopefully funny re-telling of The Odyssey. END_OF_DOCUMENT_TOKEN_TO_BE_REPLACED
This entry was posted on Saturday, August 11th, 2018 at 7:41 pm and posted in South Australia. You can follow any responses to this entry through the RSS 2.0 feed.
« The Quietly Unchanging Flint Hills
Recent Davenport Guests Include Cher »