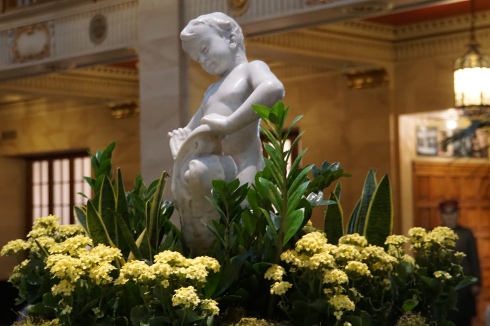 On August 12, 2018, I told the story of John Reed, who might have set the world’s record for length of employment if he hadn’t died this year.  John worked at Spokane’s Davenport Hotel for 75 years.  I told John’s story but didn’t say much about this elegant hotel.  Today I make amends for that.

The Davenport Hotel opened in 1914.  It was the first hotel in the United States with air-conditioning and the place where Crab Louis was created.   If you’ve been in the original Davenport, you’ll understand why its clientele would order and enjoy this dish.  It was built and run by Louis Davenport.  Its lobby is in the Spanish Renaissance style, and upstairs from it is the Hall of the Doges, which is still breathtaking and Spokane’s oldest ballroom.  Davenport sold his hotel in 1945 and died in his suite there 6 years later.  Only one of the guest rooms he created, the Circus Room, survives.

The Davenport, which is elegantly ornate today, closed in 1985.  Demolition was considered, but it was rescued by Walt and Karen Worthy.   They spent millions restoring it and it reopened in 2002.  Today it’s part of Marriott’s Autograph Collection, and the Worthys run 5 Spokane hotels.

The original Davenport is a must-see knockout for anyone visiting Spokane, an improving travel destination.  On its website is a list of its famous guests.  Almost every 20th century President has visited.  Bing Crosby, who was a Spokane native, stayed here more than once, and there’s a tribute to him for older guests on the 2nd floor near the Hall of the Doges.  The chandeliers in the Marie Antoinette Ballroom are original, but the new ones in the Grand Pennington Ballroom are from Spain.

The staff of the Davenport is delightful.  One of the receptionists wrote down this quote from Louis Davenport for me.  “We hope to so well please our guests that they will be glad they came, sorry to leave, and eager to return.”  Louis would be happy to know that this is still true.

Since the beginning, I've had to avoid writing about the downside of travel in order to sell more than 100 articles. Just because something negative happened doesn't mean your trip was ruined. But tell that to publishers who are into 5-star cruise and tropical beach fantasies. I want to tell what happened on my way to the beach, and it may not have been all that pleasant. My number one rule of the road is...today's disaster is tomorrow's great story. My travel experiences have appeared in about twenty magazines and newspapers. I've been in all 50 states more than once and more than 50 countries. Ruth and I love to travel internationally--Japan, Canada, China, Argentina, Hungary, Iceland, Italy, etc. Within the next 2 years we will have visited all of the European countries. But our favorite destination is Australia. Ruth and I have been there 9 times. I've written a book about Australia's Outback, ALONE NEAR ALICE, which is available through both Amazon & Barnes & Noble. My first fictional work, MOVING FORWARD, GETTING NOWHERE, has recently been posted on Amazon. It's a contemporary, hopefully funny re-telling of The Odyssey. END_OF_DOCUMENT_TOKEN_TO_BE_REPLACED
This entry was posted on Wednesday, August 22nd, 2018 at 8:48 pm and posted in Washington State. You can follow any responses to this entry through the RSS 2.0 feed.
« Travel Safety
The 5 Compass American Museum of Western Art »