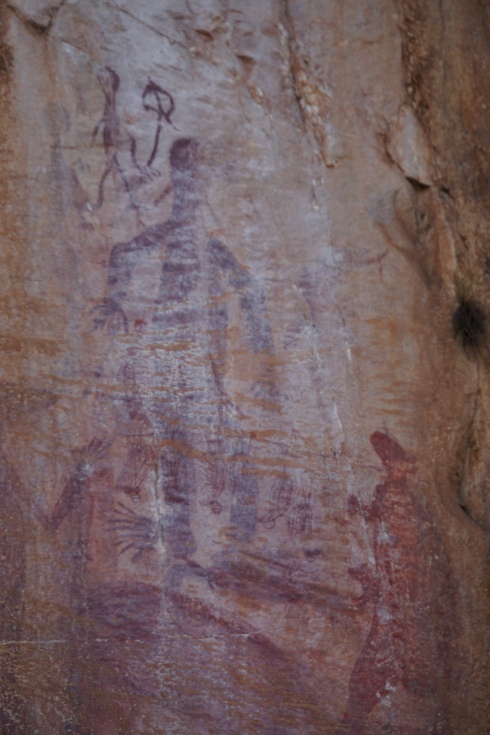 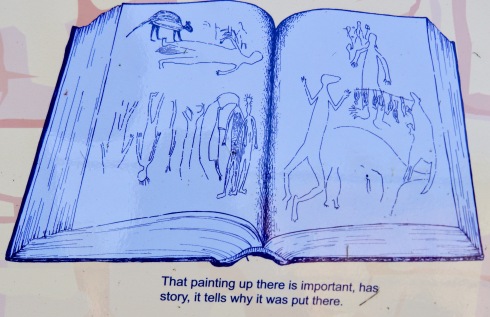 The Ghan from Alice Springs to Darwin in Australia’s Northern Territory (NT) did include one off-the-train excursion, a Nitmiluk Gorge cruise.  “Relax as you discover the grandeurs of one of the NT’s most monumental natural wonders,” its brochure raved in wild overstatement.  This experience was OK but not unlike many similar ones that Ruth and I have experienced in The Kimberly.  Jamie helped make it seem far better. 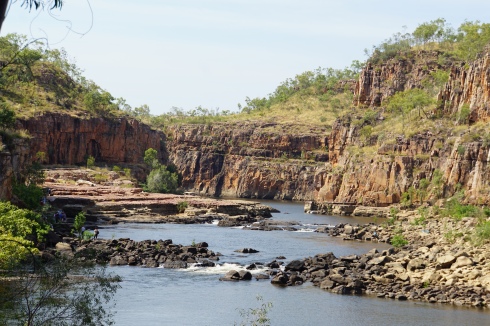 The Northern Territory is the only area of Australia with 2 World Heritage National Parks.   Nitmiluk is not one of them.  They are Kakadu and Uluru-Kata Tjuta, formerly known as Ayers Rock.  Most people traveling to The Outback in this vast continent-country are going to one or the other, or both, of these.  There are 22 other national parks in this Territory.   Australia has more  than 500 national parks.  The exact number is never stated, perhaps because more are being added each year.  Not all of them have rock art like Nitmiluk.

Katherine, which has been the service center of a vast region and a town that is very hot most of the year, has grown to be something of a travel center too.  The Katherine Gorge, home to Nitmiluk National Park, is about 18 miles northeast of this town, which has grown from 250 people to around 10,000 since the 1930s.   A lot of its residents are Aboriginals like Jamie or seasonal Caucasians.  We were there just at the end of the rainy season.

The traditional Aboriginals of this region are the Jawoyn people.  Some of their rock art in this gorge has been there for 40,000 years.  Jamie told us about the 46 fish species in this gorge (90% of its water is underground), the kinds of trees we were seeing like silverleaf paperbarks, the chalky native fruit his people depend upon, etc.  He even told us about Jeda, one of the first Australian films in color.  Made in 1955, Jeda was well-known to the 50 people on this boat who were grinning and nodding their heads while Jamie told us about a movie that I had never heard of.  He told us that male barramundi become female to breed, and that his people have 2 explanations for the presence of this gorge–an earthquake or a dragon/snake carved it.  Jamie had probably told this to groups like us for many years, but his presentation sounded fresh and full of pride.  He pointed to one of the resident crocs and told us that they were getting bigger because they’re now protected.  I complimented him on his talk as we exited the boat after we saw the ancient rock art that was mostly reclining humans or local animals.

If it hadn’t been for Jamie, this would have been a waste of time.

Since the beginning, I've had to avoid writing about the downside of travel in order to sell more than 100 articles. Just because something negative happened doesn't mean your trip was ruined. But tell that to publishers who are into 5-star cruise and tropical beach fantasies. I want to tell what happened on my way to the beach, and it may not have been all that pleasant. My number one rule of the road is...today's disaster is tomorrow's great story. My travel experiences have appeared in about twenty magazines and newspapers. I've been in all 50 states more than once and more than 50 countries. Ruth and I love to travel internationally--Japan, Canada, China, Argentina, Hungary, Iceland, Italy, etc. Within the next 2 years we will have visited all of the European countries. But our favorite destination is Australia. Ruth and I have been there 9 times. I've written a book about Australia's Outback, ALONE NEAR ALICE, which is available through both Amazon & Barnes & Noble. My first fictional work, MOVING FORWARD, GETTING NOWHERE, has recently been posted on Amazon. It's a contemporary, hopefully funny re-telling of The Odyssey. END_OF_DOCUMENT_TOKEN_TO_BE_REPLACED
This entry was posted on Friday, August 24th, 2018 at 9:57 pm and posted in Northern Territory. You can follow any responses to this entry through the RSS 2.0 feed.
« The 5 Compass American Museum of Western Art
The Shape of Speed »