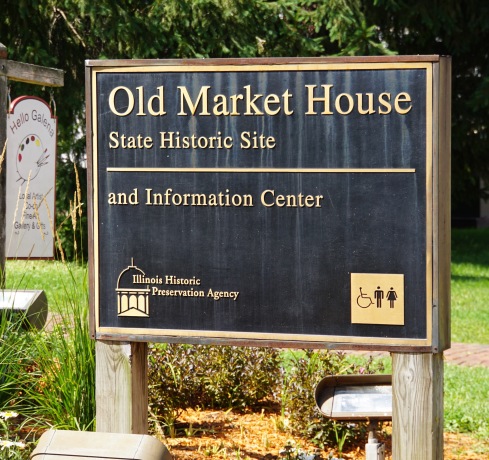 Most of the time visitor centers are just dispensers of local information.  Occasionally they’re more, as in real attractions.  I recently wrote about one of these, the Northeast Wyoming Visitor Center just west of South Dakota’s Black Hills.  Ruth & I saw another quality VC on the same journey in Galena, Il.  Not only is it a genuine welcome center, it’s also a credible museum in a historic building, the Old Market House.

When Galena, the city that refused to die and reinvented itself in the 20th century as a tourist magnet, was a frontier river port and lead mining center on the Mississippi in the 19th century, this building was both the city market and its government center with 2 jail cells.  Built in 1845, this Greek Revival building is at 123 North Commerce Street.   According to Wikipedia it contained 12 “enclosed farmer’s market stalls”.  Now it’s a State Historic Site.

The current display in the Old Market House contains lots of Ulysses S. Grant memorabilia and information about Galena’s 9 Civil War generals.  Worth seeing are 40 Currier & Ives prints depicting Civil War battles, a Civil War chess set, Grant’s own buggy sporting his travel trunk, and some 19th century coins.  Grant was an enthusiastic international traveler.  Galena was home to 9 Civil War generals including Grant.   No other town produced so many honored military figures who rose to general status during the Civil War.  That’s Grant, his wife, and 3 children depicted in a painting in his Galena home.

Since the beginning, I've had to avoid writing about the downside of travel in order to sell more than 100 articles. Just because something negative happened doesn't mean your trip was ruined. But tell that to publishers who are into 5-star cruise and tropical beach fantasies. I want to tell what happened on my way to the beach, and it may not have been all that pleasant. My number one rule of the road is...today's disaster is tomorrow's great story. My travel experiences have appeared in about twenty magazines and newspapers. I've been in all 50 states more than once and more than 50 countries. Ruth and I love to travel internationally--Japan, Canada, China, Argentina, Hungary, Iceland, Italy, etc. Within the next 2 years we will have visited all of the European countries. But our favorite destination is Australia. Ruth and I have been there 9 times. I've written a book about Australia's Outback, ALONE NEAR ALICE, which is available through both Amazon & Barnes & Noble. My first fictional work, MOVING FORWARD, GETTING NOWHERE, has recently been posted on Amazon. It's a contemporary, hopefully funny re-telling of The Odyssey. END_OF_DOCUMENT_TOKEN_TO_BE_REPLACED
This entry was posted on Monday, September 17th, 2018 at 9:30 pm and posted in illinois. You can follow any responses to this entry through the RSS 2.0 feed.
« River Hugging Roads
Touring Seattle’s Central Library »