The 2nd most interesting man I met on our 9th trip to Australia was Russell Jack.  He’s 50% Chinese but 100% Australian.  It was fun to close my eyes and listen to him speak, then open them to see a man who appeared to be anything but Chinese.  He told jokes and revealed details about his heritage constantly as he gave Ruth & me a tour of his dragon. 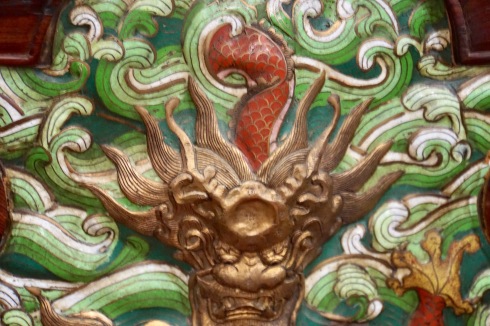 We went to Bendigo not to meet Jack but to visit a Marimekko exhibit that Ruth really wanted to see.  Meeting Mr. Jack was the bonus of the day.  I wondered if I could find something interesting about him on American Google so put in his name.  There was nothing.   Google even corrected me, assuming that I was really interested in Jack Russells.

Before 1865 more than 23,000 Chinese had emigrated to Australia, and 5,000 of them were working in the goldfields.  Fewer than 2,000 of them were in Bendigo after the goldfields were depleted.   According to Russell, many of those who stayed became furniture makers and banana importers.   Others opened stores, restaurants, and laundries.  When Australian Federation occurred in 1901, an Immigration Restriction Act passed and Chinese arrivals virtually ceased.  Russell, a descendant of the almost 2,000, became pure Aussie.  He married an Australian girl who was not Chinese.  There are many tributes in Russell’s museum to the Chinese Australians who fought in World Wars.   Now there’s a resurgence of Chinese immigration as Australia seeks even more Chinese business ties and people from China flood into Australia.

Long before China’s economic surge, Russell was proudly in touch with his Chinese heritage.  His father gave him the name Louey Yeung from his native Toishanese dialect.  Although Russell excelled in western sports, he joined the Bendigo Chinese Association and, as a young man, he and his 4 brothers carried the head of Loong in the Easter parade each year.  Russell has been President of this Association for almost 40 years.  During that time he has overseen the construction and running of the Golden Dragon Museum where Loong, now retired, remains on permanent display along with other dragons and many Chinese artifacts, like a screen worth $2 million.   In front of the Golden Dragon Museum are the Yi Yuan gardens and the Guan Yin temple.  Also in Bendigo is the Joss House Temple constructed in the 1870s and now one of the few original buildings of its type in Australia.  Russell is about to oversee a museum extension that looks like an overturned whale but represents the “Chinese wheel of life”.  Feng shui principles have been incorporated into the museum addition’s design.

Sun Loong is a Chinese dragon.  He is benevolent, as are all Chinese dragons, and quite beautiful.  He is decorated with more than 90,000 mirrors, and it took up to 80 people to carry him in any parade because he is 200 feet long.  Sun Loong was made in Hong Kong and is the largest decorative dragon in Australia.  Loong is the Chinese term for a dragon, and Bendigo’s Loong is more than 100 years old.  Chinese Dragons, unlike those in other cultures, are always benign, heavenly creatures that bring rain by flying through clouds.  There is a formula for their construction.  They have a camel’s head, a deer’s horns, the claws of a hawk, etc. Bendigo, which is about an hour’s train ride north of Melbourne, is a wonderful town.  It’s worth going there to see Sun Loong, meet Russell Jack, and tour the Golden Dragon Museum.

Since the beginning, I've had to avoid writing about the downside of travel in order to sell more than 100 articles. Just because something negative happened doesn't mean your trip was ruined. But tell that to publishers who are into 5-star cruise and tropical beach fantasies. I want to tell what happened on my way to the beach, and it may not have been all that pleasant. My number one rule of the road is...today's disaster is tomorrow's great story. My travel experiences have appeared in about twenty magazines and newspapers. I've been in all 50 states more than once and more than 50 countries. Ruth and I love to travel internationally--Japan, Canada, China, Argentina, Hungary, Iceland, Italy, etc. Within the next 2 years we will have visited all of the European countries. But our favorite destination is Australia. Ruth and I have been there 9 times. I've written a book about Australia's Outback, ALONE NEAR ALICE, which is available through both Amazon & Barnes & Noble. My first fictional work, MOVING FORWARD, GETTING NOWHERE, has recently been posted on Amazon. It's a contemporary, hopefully funny re-telling of The Odyssey. END_OF_DOCUMENT_TOKEN_TO_BE_REPLACED
This entry was posted on Sunday, September 23rd, 2018 at 9:48 pm and posted in Australia, Victoria. You can follow any responses to this entry through the RSS 2.0 feed.
« Go Underground in Seattle
The Feckless Forney »