Like the International Church of Cannabis, I wouldn’t have known about the Forney Museum of Transportation if I hadn’t checked Atlas Obscura before going to Denver.  It’s among the 19 “cool” things to do there according to this alternative website.  Atlas Obscura noted its “Cast of unsettling mannequins” and raved about its “unique vehicle collections”.  The Forney Museum of Transportation, which is in an industrial neighborhood that has seen better days, is certainly neglected, but I liked a couple of aspects of this attraction.  In general, I do not recommend it except for those who are deeply interested in a historical overview all forms of transportation.

The Forney Museum of Transportation began as a family operation that showcased the private collection of JD and Rachel Forney from Fort Collins.  Rachel gifted JD with a 1921 Kissel Touristor in 1956, and their obsession resulted in more than 600 collected, historic artifacts related to transportation and not just cars.   JD owned a Kissel when he and Rachel were dating before marriage.  The collection includes Amelia Earhart’s Gold Bug Kissel and a rare Union Pacific “Big Boy” steam locomotive.  It’s HUGE, one of only 25 made, and next to an equally interesting red UP steam rotary snow plow, which is certainly appropriate in a Colorado transportation collection.

The Forney claims to put together special shows.  When we were there, for example, it was promoting cars of the thirties.  I looked everywhere for this feature and finally had to ask where it was.   It’s been extended, the man at the entry desk told me irrelevantly before directing me to the regular place for this era that was packed with vehicles of the 1930s.  The museum map called it the “Rotating Exhibits & Event Space (Available for rent)” area.  The current diversion is “American Cars of the 70s”.  I expect that it too will be extended.  By the way, if you’re really interested, The Forney is both asking for volunteers and honoring those who have served in the past. 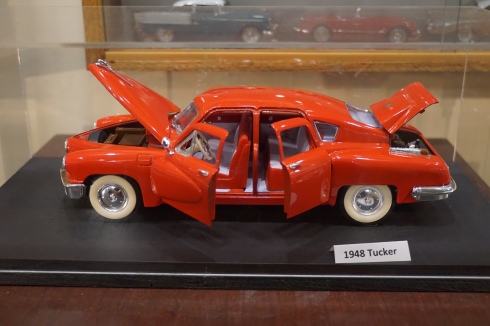 One thing I really did enjoy in this old museum was not the 1904 Denver Streetcar but the many small car models.  I was especially enamored of the display-worthy 1948 Tucker that any model collector would lust after.  I also liked the 1938 Mercedes-Benz Cabriolet and this museum’s  small display of hood ornaments, but not the art in the hallway leading to the men’s room.

Since the beginning, I've had to avoid writing about the downside of travel in order to sell more than 100 articles. Just because something negative happened doesn't mean your trip was ruined. But tell that to publishers who are into 5-star cruise and tropical beach fantasies. I want to tell what happened on my way to the beach, and it may not have been all that pleasant. My number one rule of the road is...today's disaster is tomorrow's great story. My travel experiences have appeared in about twenty magazines and newspapers. I've been in all 50 states more than once and more than 50 countries. Ruth and I love to travel internationally--Japan, Canada, China, Argentina, Hungary, Iceland, Italy, etc. Within the next 2 years we will have visited all of the European countries. But our favorite destination is Australia. Ruth and I have been there 9 times. I've written a book about Australia's Outback, ALONE NEAR ALICE, which is available through both Amazon & Barnes & Noble. My first fictional work, MOVING FORWARD, GETTING NOWHERE, has recently been posted on Amazon. It's a contemporary, hopefully funny re-telling of The Odyssey. END_OF_DOCUMENT_TOKEN_TO_BE_REPLACED
This entry was posted on Monday, September 24th, 2018 at 9:40 pm and posted in Colorado. You can follow any responses to this entry through the RSS 2.0 feed.
« A Golden Dragon Museum
George Brown in Darwin »