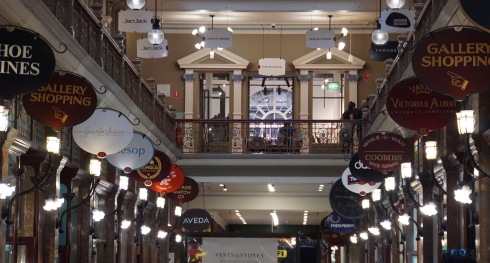 The first shopping center was built by the Roman Emperor Trajan.  It was a somewhat circular building with a large hall and a number of shops facing a long corridor.  There were about 150 stores selling things Romans really wanted like luxury clothes and spices.  A casual stroll through it made it easy to see items for sale.

There are many traditional shopping centers in Australia that are still doing good business, but its old shopping arcades are more fun see.  I’ve written about the best one that is in Sydney’s Queen Victoria Building.  It’s full of elegant stores and restaurants on 5 levels and a genuine tourist attraction.  So is The Strand Arcade practically across the street from the Queen.

The Strand connects George Street to the purely pedestrian Pitt Street Mall, the center of this city’s shopping activity that’s always full of people,  If you make a right turn from where The Strand hits Pitt Street, you quickly come to a more traditional and vast shopping center called the Westfield Sydney.  Inside it are 300 stores and restaurants.  Ruth and I have found some of the restaurants wonderful and reasonably priced in an expensive city.  The pedestrian mall ends at Market Street where you will find David Jones, the oldest department store in the world still operating under its original name.  The Westfield is cleverly arranged into precincts with shops that specialize in luxury items, international designs, Australian products, etc. 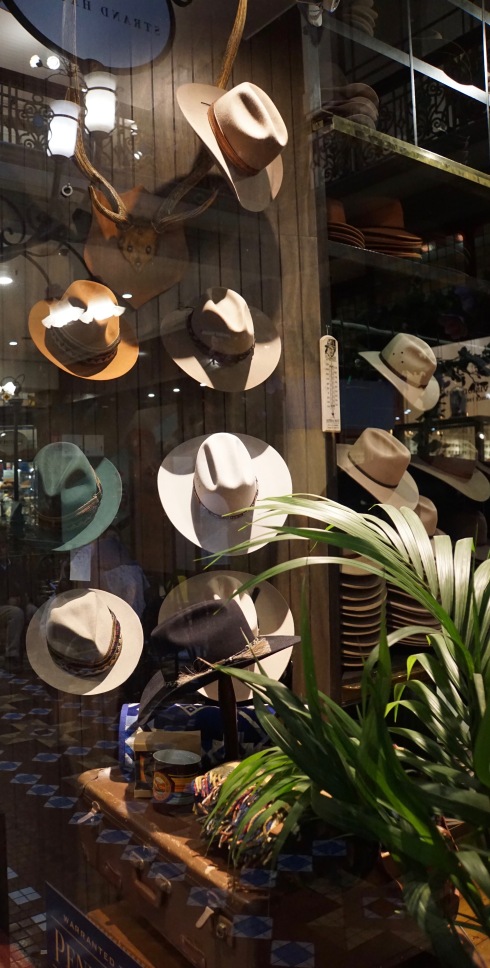 The Strand was one of the first Victorian buildings in Sydney, and it has been carefully preserved to still look like the 1890s.  It officially opened in 1892.    There are similar arcades in Adelaide, Brisbane, and Melbourne.  Our favorite store in The Strand sells Haigh’s chocolates.  This store’s mostly hand-made delights are only available in Australia.

By the way, when we were there, George Street was completely torn up because light rail is coming to it.  The new line will begin at Circular Quay and end in suburban Randwick and Kingsford by 2019.  People will soon also be able to travel to the new Barangaroo Reserve by light rail.

This city is always reinventing itself while preserving the best of its past.

Since the beginning, I've had to avoid writing about the downside of travel in order to sell more than 100 articles. Just because something negative happened doesn't mean your trip was ruined. But tell that to publishers who are into 5-star cruise and tropical beach fantasies. I want to tell what happened on my way to the beach, and it may not have been all that pleasant. My number one rule of the road is...today's disaster is tomorrow's great story. My travel experiences have appeared in about twenty magazines and newspapers. I've been in all 50 states more than once and more than 50 countries. Ruth and I love to travel internationally--Japan, Canada, China, Argentina, Hungary, Iceland, Italy, etc. Within the next 2 years we will have visited all of the European countries. But our favorite destination is Australia. Ruth and I have been there 9 times. I've written a book about Australia's Outback, ALONE NEAR ALICE, which is available through both Amazon & Barnes & Noble. My first fictional work, MOVING FORWARD, GETTING NOWHERE, has recently been posted on Amazon. It's a contemporary, hopefully funny re-telling of The Odyssey. END_OF_DOCUMENT_TOKEN_TO_BE_REPLACED
This entry was posted on Wednesday, September 26th, 2018 at 10:28 pm and posted in Great City, New South Wales. You can follow any responses to this entry through the RSS 2.0 feed.
« George Brown in Darwin
Giant Marsupials in the South Australian Museum »