The United States gave up control of the Panama Canal in 1999.  Trouble was expected but didn’t happen.  The Panamanians did a fine job of running the canal operation.  They even reduced transit time.  We started into the navigational channel at 5 am and exited the canal at 3:20 pm.  We had been told to expect a lot of traffic in the locks, but it was a slow day.  Because we entered from the Pacific, we traveled mostly northwest. 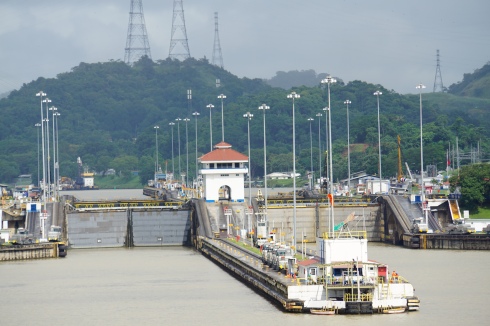 The Panama Canal was so well built that the original concrete  poured without rebar to create the locks in 1915 is still functioning.  The expanses of concrete seen at the lock chambers remain the largest concrete structures ever built.  They have never failed but have closed down 3 times due to rain, war, and accident.  The ubiquitous tugboats that I saw throughout the passage are only used in case of a breakdown or in an emergency.   Boats carrying personnel are paddled because engines conk out in rainy climates like Panama’s.

Most of the other large ships we saw in the dark at the beginning of our transit were either waiting to drop off cargo or were ships that had not made a reservation. Non-res ships have to wait for an opening because they have not paid the $35,000 reservation fee.  For now, they pass under 2 car-carrying bridges, the Bridge of the Americas and the Centennial, which opened in 2003.  The 1st one is on the Pan American Highway, the longest road in the world that begins in Ushuaia, Argentina, and terminates in Prudhoe Bay, Alaska.  It’s about 30,000 miles long but has a gap called Darien between Columbia and Panama.

When the Panamanians took over the operation of the canal in 1999, 9 US military facilities were repurposed.  One is now a college and Howard AFB is an airport.  Many hotels were built as Panama City was envisioned as a major leisure destination.  This has not exactly happened.  As Panama City became a kind of a seedier Singapore struggling with crime, a Trump Hotel came and went.  It was Trump’s 1st hotel venture outside the United States.  The James Bond film Quantum of Solace was partially filmed in Casco Viejo, Panama City’s colonial neighborhood.

One of my vivid memories of this memorable travel day was seeing many small electric mules, those one-car trains on tracks on either side of the concrete locks, pulling gigantic ships through the chambers.  We had covered about 50 miles going from the Pacific Ocean to the Gulf of Mexico and the Atlantic Ocean beyond.

Since the beginning, I've had to avoid writing about the downside of travel in order to sell more than 100 articles. Just because something negative happened doesn't mean your trip was ruined. But tell that to publishers who are into 5-star cruise and tropical beach fantasies. I want to tell what happened on my way to the beach, and it may not have been all that pleasant. My number one rule of the road is...today's disaster is tomorrow's great story. My travel experiences have appeared in about twenty magazines and newspapers. I've been in all 50 states more than once and more than 50 countries. Ruth and I love to travel internationally--Japan, Canada, China, Argentina, Hungary, Iceland, Italy, etc. Within the next 2 years we will have visited all of the European countries. But our favorite destination is Australia. Ruth and I have been there 9 times. I've written a book about Australia's Outback, ALONE NEAR ALICE, which is available through both Amazon & Barnes & Noble. My first fictional work, MOVING FORWARD, GETTING NOWHERE, has recently been posted on Amazon. It's a contemporary, hopefully funny re-telling of The Odyssey. END_OF_DOCUMENT_TOKEN_TO_BE_REPLACED
This entry was posted on Saturday, November 3rd, 2018 at 9:10 pm and posted in Central America. You can follow any responses to this entry through the RSS 2.0 feed.
« The Panama Canal’s Present
Visiting Guatemala »