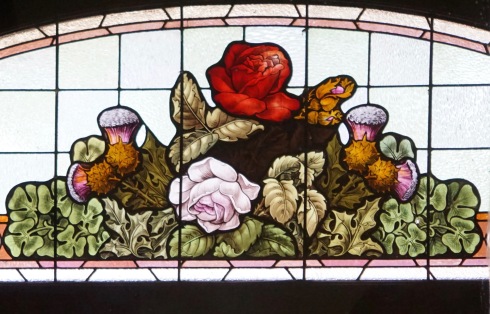 According to mining.co, BHP Billiton is the #1 mining company in the world if market value is the measure.  BHP Billiton’s value in US dollars is $90.67 billion.   BHP’s revenue in 2017 exceeded $38 billion.  This company’s headquarters is in Melbourne, Victoria, Australia.  The BH in its name stands for Broken Hill, a town in far western New South Wales that still haunts me.

Ruth and I like to take walking tours, especially of towns new to us.  This is a quick way to learn a lot in a little time.  The walking tour of Broken Hill was no exception.  We booked it at Broken Hill’s excellent visitor centre, it lasted for 2 hours, and Ross was our guide.  It took Ross a while to tell us that he had worked in Broken Hill’s mine for 52 years, and it was still owned by BHP when he started.  The Chinese now own this mine.

The still-producing-after-more-than 100 years mine is atop a truly broken hill with the town spread below it.  Ross not unexpectedly took us on a tour of lots of old mining equipment to begin.  Spread out on a city block, it now looks like a lot of rusting sculptures.  The cars that the miners rode down the shaft in were the most interesting relics.  Ross told us that 1,500 are now employed in this town’s mine on the hill where all the real work is done by machines. The original mine shafts was made of wood, but they are now steel and the ore is much further down.  Ross said matter-of-factly that the Chinese take this ore, process it, and ship it back to Australia. 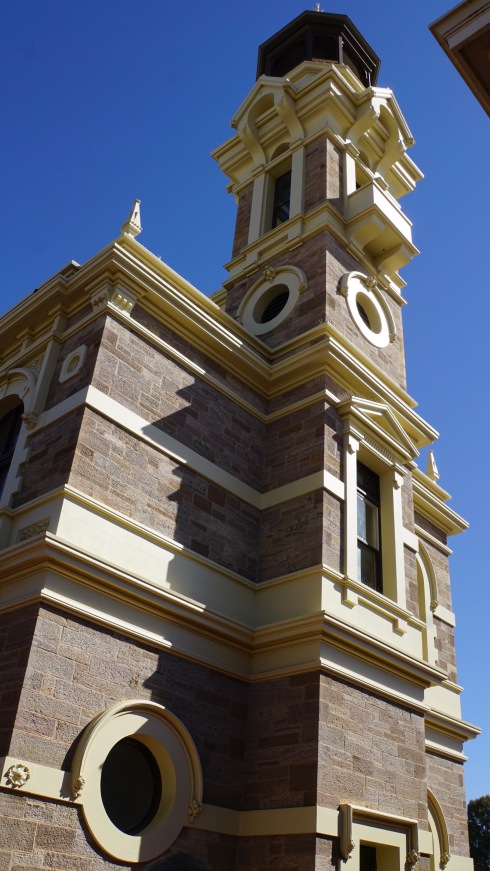 Many of the streets we walked while Ross told us about his city contained a mix of handsome 19th and early 20th century buildings that had seen lots of union and business activities.  Now they are either abandoned or repurposed.  We entered and admired lots of them.   Ross told us that when the mine was a huge producer of zinc, silver, and lead that Broken Hill was a harsh town not fit for respectable women.  It was a place of drunks, gamblers, and mining dust.  The men who came to work in this mine from Cornwall and Wales earned about the same as a sheep shearer, and it wasn’t too long before union organizers showed up to change that.  There was a major strike in 1899.

Ross always paused when he had bad news to tell us.  He said that he never liked working underground and came to prefer being in the electrical department, that only ½ of today’s local miners are in a union, and that the population of his town is down from 21,000 in 2001 to about 17,000 today.  He expected that another 3,000 would soon leave because there’s, “Not a lot here for young people”.

In 1885, 7 mining leases joined to form the Broken Hill Proprietary Company Ltd (BHP).   This facility was no longer under the BHP name 54 years later.

Since the beginning, I've had to avoid writing about the downside of travel in order to sell more than 100 articles. Just because something negative happened doesn't mean your trip was ruined. But tell that to publishers who are into 5-star cruise and tropical beach fantasies. I want to tell what happened on my way to the beach, and it may not have been all that pleasant. My number one rule of the road is...today's disaster is tomorrow's great story. My travel experiences have appeared in about twenty magazines and newspapers. I've been in all 50 states more than once and more than 50 countries. Ruth and I love to travel internationally--Japan, Canada, China, Argentina, Hungary, Iceland, Italy, etc. Within the next 2 years we will have visited all of the European countries. But our favorite destination is Australia. Ruth and I have been there 9 times. I've written a book about Australia's Outback, ALONE NEAR ALICE, which is available through both Amazon & Barnes & Noble. My first fictional work, MOVING FORWARD, GETTING NOWHERE, has recently been posted on Amazon. It's a contemporary, hopefully funny re-telling of The Odyssey. END_OF_DOCUMENT_TOKEN_TO_BE_REPLACED
This entry was posted on Thursday, November 15th, 2018 at 11:59 pm and posted in Australia, New South Wales. You can follow any responses to this entry through the RSS 2.0 feed.
« Puerto Vallarta: Living on Past Glory
Central America’s City of Lions »