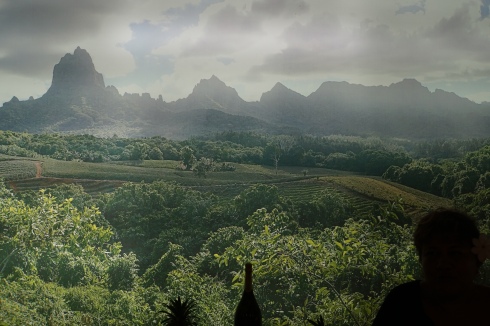 There are pearl and vanilla farms, lots of shops, and exclusive, hidden resorts all over French Polynesia; but I only saw one factory.  Tahiti and the other islands in this part of the world just simply aren’t productive in that way.  These islands’ economies are about tourism and playfulness, not about creating commercial goods in bustling factories.  People come here to get away from that. The only real factory I saw was off the road and kind of hidden away on the prosperous island of Mo’orea near the entrance to the Baie de Cook.  The main guide to this idyllic island calls it the fruit juice factory at Pihaena, but it’s far more than that.

Its official name is the Distillerie et Usine de Jus de Fruits de Moorea and it has loading docks, delivery trucks, and signs of disciplined productivity in the factory area; but most of the visitors are patronizing the gift shop instead of taking a tour.  And what a gift shop!  The steaming factory behind the retail building was producing many delicious juices and liqueurs, including what Lonely Planet calls “a devilish ‘Tahitian punch’ ”.  Juice and alcoholic beverages in small quantities were being dispensed behind a bar in the gift shop.  Tasting what the factory was producing was both free and fun.  This is, for sure, a 5 Compass, highly recommended stop!

The gift shop was the kind of place where almost everyone came out with a purchase–a tee-shirt, a new key chain, a postcard showing a paradisiacal scene.   Ruth and I bought 2 reasonably priced bottles of Tahitian vanilla there.  At home, our main source of vanilla is Madagascar, which produces 80% of the world’s supply of this common flavorer.  The price of Madagascar vanilla is in the gold range, about 8 times higher than it was just a few years ago.   Crop failure, a major cyclone, and theft of surviving vanilla pods are the main causes of the crisis that might eventually result in massive price increases.

There are several vanilla farms scattered around The Society Islands.  I went to one on Taha’a, the island that locals all told us had vanilla farms and the best prices.  Taha’a is often called the vanilla island since 80% of Tahitian vanilla is produced here.   One source even said that the scent of vanilla was in the air.  I did not find this to be the case and didn’t like the smell of the vanilla that was being produced at the Taha’a facility.  I didn’t buy.  Ruth and I found that, in many places, vanilla beans were for sale but not the liquified version we were used to and wanted.

Since the beginning, I've had to avoid writing about the downside of travel in order to sell more than 100 articles. Just because something negative happened doesn't mean your trip was ruined. But tell that to publishers who are into 5-star cruise and tropical beach fantasies. I want to tell what happened on my way to the beach, and it may not have been all that pleasant. My number one rule of the road is...today's disaster is tomorrow's great story. My travel experiences have appeared in about twenty magazines and newspapers. I've been in all 50 states more than once and more than 50 countries. Ruth and I love to travel internationally--Japan, Canada, China, Argentina, Hungary, Iceland, Italy, etc. Within the next 2 years we will have visited all of the European countries. But our favorite destination is Australia. Ruth and I have been there 9 times. I've written a book about Australia's Outback, ALONE NEAR ALICE, which is available through both Amazon & Barnes & Noble. My first fictional work, MOVING FORWARD, GETTING NOWHERE, has recently been posted on Amazon. It's a contemporary, hopefully funny re-telling of The Odyssey. END_OF_DOCUMENT_TOKEN_TO_BE_REPLACED
This entry was posted on Tuesday, January 29th, 2019 at 9:54 pm and posted in French Polynesia. You can follow any responses to this entry through the RSS 2.0 feed.
« Bora Bora
Costa Rica’s Birds »