Debbie Hurlbert lives in Ohio.  Ruth and I met her in Costa Rica’s national museum.  She had just taken a birding eco tour and was still in shock.  She expected to see 100 birds and had already recorded more than 300 sightings,  including the Resplendent Quetzal, the bird that some consider the most beautiful in the world.  She had been able to photograph many bird species but not the quetzal and saw a Timberline Wren, a species that only lives on a Costa Rican volcano. She called her tour the trip of a lifetime and offered to send us some of her photos. They arrived earlier this week, so all of the photos below are Debbie’s.  The male Resplendent Quetzal with the white tail is from Wikipedia.  Below are Debbie’s Honeycreeper, Violet Sabrewing, and Flame-colored Tanager (there are 42 species of tanagers in Costa Rica).

Ruth and I have been to several birding spots like Nome, Alaska, but we’re not active bird watchers and didn’t have the time and patience needed to focus on them in Costa Rica.   Therefore, we appreciated meeting Debbie and all the information about birds in Lonely Planet.  This popular publication claims that there are 30 species of hummingbirds that it calls “cloud-forest creatures” and says that many of them can usually be seen in the Reserva Biologica Bosque Nuboso Monteverde, which it calls a “birdwatching paradise” with more than 400 recorded species, including the Resplendent Quetzal.  It’s spotted most often during its March and April nesting season but some are around throughout the year.  There are more than 50 species of hummingbirds overall in Costa Rica.

Despite its incredible biodiversity that includes more than 500,000 species of plants, there is trouble in this Central American Eden.  Despite its efforts to protect its environment, deforestation, the clearing of land for vast plantations, more than 2 million tourists arriving each year, and other issues are having a negative impact.  The Scarlet Macaw that was once seen almost everywhere in Costa Rica just 60 years ago is now thriving in just 2 isolated areas, the Peninsula de Osa and the Parque Nacional Carara.

Lonely Planet is very forthright.  It says, “…conservationists in Costa Rica occasionally face harassment or worse from local poachers.”  Ruth and I saw evidence of this while there.  It will be interesting to see if this small country with big diversity can protect what remains. 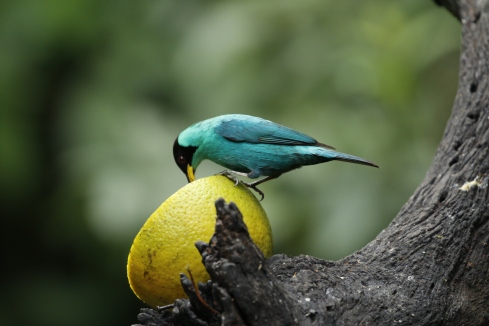 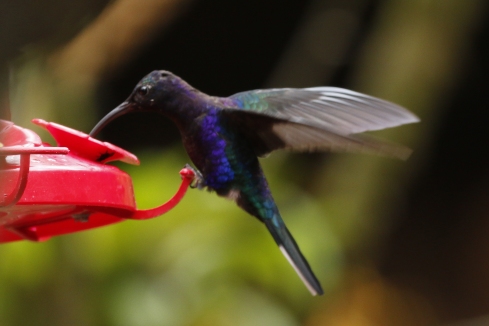 Since the beginning, I've had to avoid writing about the downside of travel in order to sell more than 100 articles. Just because something negative happened doesn't mean your trip was ruined. But tell that to publishers who are into 5-star cruise and tropical beach fantasies. I want to tell what happened on my way to the beach, and it may not have been all that pleasant. My number one rule of the road is...today's disaster is tomorrow's great story. My travel experiences have appeared in about twenty magazines and newspapers. I've been in all 50 states more than once and more than 50 countries. Ruth and I love to travel internationally--Japan, Canada, China, Argentina, Hungary, Iceland, Italy, etc. Within the next 2 years we will have visited all of the European countries. But our favorite destination is Australia. Ruth and I have been there 9 times. I've written a book about Australia's Outback, ALONE NEAR ALICE, which is available through both Amazon & Barnes & Noble. My first fictional work, MOVING FORWARD, GETTING NOWHERE, has recently been posted on Amazon. It's a contemporary, hopefully funny re-telling of The Odyssey. END_OF_DOCUMENT_TOKEN_TO_BE_REPLACED
This entry was posted on Wednesday, January 30th, 2019 at 9:20 pm and posted in Central America. You can follow any responses to this entry through the RSS 2.0 feed.
« Global Vanilla Crisis
Bureaucratic Time-wasting »