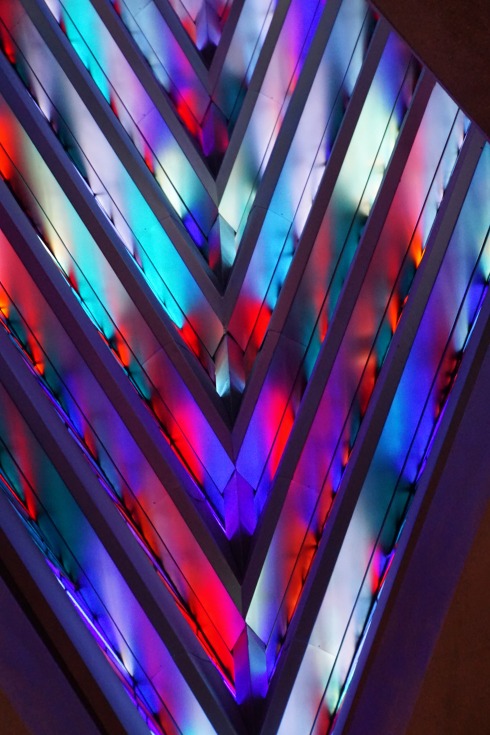 There are 2 relatively unheralded Frank Lloyd Wright buildings in the Phoenix, AZ, area.  Both are exceptional.   One of them appears to be his first design that was constructed after he died.  The other is the project he was working on when he died in 1959.  The First Christian Church has no scheduled tours.  The Gammage Auditorium gives brief tours on Monday afternoon between 1 and 4 pm if the on-line, virtual tour doesn’t satisfy.

The First Christian Church was built on property that had been a date palm tree farm.   Wright’s design is surrounded by beautiful trees that honor this fact.  The date trees were at first expected to be replaced by a complete seminary/university that would occupy 80 acres.  Wright completed his plans for it 9 years before he died.  The seminary never happened.  With Wright’s widow’s approval, construction of the church began in 1971.   It was completed 2 years later, and a bell tower that is especially impressive was added 5 years later.  Today it is an active church with about 500 parishioners, lively services, and outreach programs that include 3 African groups and 1 Burmese organization.

We called ahead and a lovely lady named Sandy agreed to give us a brief tour when Ruth and I arrived.  We promised Sandy that we’d let others know to call first, and plan to visit only Monday through Thursday between 9 am and 4 pm.  This church was really worth seeing, acoustically perfect, and recognizably  Wrightian.   No seat is more than 83 feet from the pulpit.  It’s at 6750 North 7th Ave in Phoenix, and services are far more likely to rely on keyboards and not the church’s regal organs.

The brochure that Sandy gave us said that Wright believed that a building in a triangular shape projected an attitude of prayer, so the church’s basic design uses a double triangle.  There’s lots of rough concrete, native stone, and stained glass to be seen.  First Christian Church’s cornerstone contains Frank Lloyd Wright’s characteristic red tile.  It has been called one of the 10 best church buildings erected in America.

First Christian Church members want visitors to think that this building is primarily to help and serve people.  That it is a special Frank Lloyd Wright design and famous are secondary.   We felt very welcomed and totally understood why no formal tours of First Christian Church are regularly scheduled.

Since the beginning, I've had to avoid writing about the downside of travel in order to sell more than 100 articles. Just because something negative happened doesn't mean your trip was ruined. But tell that to publishers who are into 5-star cruise and tropical beach fantasies. I want to tell what happened on my way to the beach, and it may not have been all that pleasant. My number one rule of the road is...today's disaster is tomorrow's great story. My travel experiences have appeared in about twenty magazines and newspapers. I've been in all 50 states more than once and more than 50 countries. Ruth and I love to travel internationally--Japan, Canada, China, Argentina, Hungary, Iceland, Italy, etc. Within the next 2 years we will have visited all of the European countries. But our favorite destination is Australia. Ruth and I have been there 9 times. I've written a book about Australia's Outback, ALONE NEAR ALICE, which is available through both Amazon & Barnes & Noble. My first fictional work, MOVING FORWARD, GETTING NOWHERE, has recently been posted on Amazon. It's a contemporary, hopefully funny re-telling of The Odyssey. END_OF_DOCUMENT_TOKEN_TO_BE_REPLACED
This entry was posted on Tuesday, March 5th, 2019 at 11:43 pm and posted in Arizona. You can follow any responses to this entry through the RSS 2.0 feed.
« Do We Need Front Sight?
San Jose’s Franco »