Ruth & I returned to the Rio Grande Valley this year to see some sights we did not experience last year, like the Santa Ana National Wildlife Refuge.  This fantastic place is either home to or is visited by more than 400 bird species and about half of North America’s butterflies.  It’s also home to endangered species like the jaguarundi and involved in a contemporary controversy that threatens its very existence. 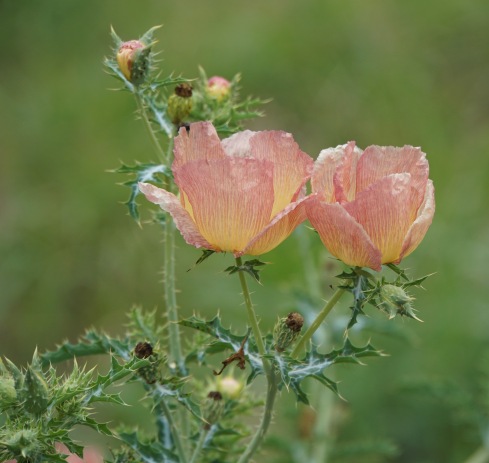 Because we called the day before, Ruth & I were able to join a small group afternoon tour of Santa Ana with Sean driving and his wife providing commentary.  It lasted for about 2 hours and enabled us to see many rare birds and plants like prickly poppies, which were in bloom.  I was surprised to see Spanish moss covering many tree and prickly pear cacti present because Santa Ana is on the edge of the Chihuahuan Desert.  I also experienced a subtropical thorn forest in one of the most biologically diverse regions of North America.  It reminded me of Costa Rica.

Santa Ana is small.   Slightly more than 2,000 acres, it has more than 14 miles of trails. Its 11 trails are mostly short and seasonally popular with visitors, especially birders.  The longest one is 2 miles long.  The tour loop that we followed in Sean’s vehicle let us see about 7 miles of this refuge that borders 3 loops of the Rio Grande River.  Mexico is on the other side.

Before we even left the visitor center for the tour, we had already watched an Altamira Oriole, a red-winged Blackbird, and a yellow-breasted kiskadee.   We had also studied more common area birds like those big chachalacas and ubiquitous green jays.

Near the end of the tour we stopped at an old cemetery, which was very interesting.   Fourteen years before The Alamo occurred in what is now San Antonio, this area was partially part of a Mexican land grant called el Rancho de Adentro.  Among the 30 graves in this cemetery were the remains of the son and heir of this ranch’s Mexican founder, some of the owner’s other descendants, and several plantation workers.

Santa Ana has been a NWR since 1943.  The current controversy involves Trump’s border wall.  Some believe that, without plan alteration, the wall will cut this refuge down the middle, annual flood waters will come up to it, and endangered resident cat species will be affected by it.  Where the wall will be built in this part of Texas still hasn’t been completely determined.

Since the beginning, I've had to avoid writing about the downside of travel in order to sell more than 100 articles. Just because something negative happened doesn't mean your trip was ruined. But tell that to publishers who are into 5-star cruise and tropical beach fantasies. I want to tell what happened on my way to the beach, and it may not have been all that pleasant. My number one rule of the road is...today's disaster is tomorrow's great story. My travel experiences have appeared in about twenty magazines and newspapers. I've been in all 50 states more than once and more than 50 countries. Ruth and I love to travel internationally--Japan, Canada, China, Argentina, Hungary, Iceland, Italy, etc. Within the next 2 years we will have visited all of the European countries. But our favorite destination is Australia. Ruth and I have been there 9 times. I've written a book about Australia's Outback, ALONE NEAR ALICE, which is available through both Amazon & Barnes & Noble. My first fictional work, MOVING FORWARD, GETTING NOWHERE, has recently been posted on Amazon. It's a contemporary, hopefully funny re-telling of The Odyssey. END_OF_DOCUMENT_TOKEN_TO_BE_REPLACED
This entry was posted on Monday, March 25th, 2019 at 11:09 pm and tagged with Tex-Mex Border and posted in Tex-Mex Border. You can follow any responses to this entry through the RSS 2.0 feed.
« Berdoll’s Pecan Pie Dispenser
Eggemeyer’s General Store »