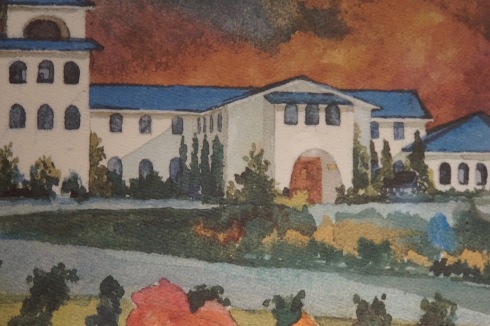 The Sanders started growing grapes in the Nevada part of the Mojave Desert about 30 years ago.  Bill and Gretchen Loken from Arizona have owned the operation the Sanders started since 2003.  Bill said the winery was not in good shape at the time they bought it, but it is now.   The Lokens did a complete overhaul and have turned the Pahrump Valley Winery into a 1st class operation.  When we were there on February 1, 2019, we were told that it has 4 new owners.  The staff could not reveal their names, but they said mysteriously that they had business interests in Las Vegas.

This winery in the desert has won more than 485 national awards.  Its 1st was for the Lokens’ zinfandel, which won their first gold medal in 2004.  There aren’t may wineries in Nevada, but Pahrump Valley was voted the best one for three years in a row by a local magazine beginning in 2015.   Its restaurant Symphony has been voted the best in Nevada too.  TripAdvisor has called it the best restaurant in Pahrump, which is 63 miles west of Las Vegas near the California border, for the past 5 years.  When our friends in Las Vegas heard that we were heading in that direction, they suggested we have lunch at Pahrump Valley Winery, one of 2 in this unlikely desert location.   We didn’t have time for a meal while there, but we did take the free winery tour, enjoyed free wine samples, and explored the gift shop.  It was fine wine.

The tour involved inspecting tanks and visiting the bottling room as about 30 people saw all phases of this winery’s operation. Our guide Joelle told us that the desert is not suitable for growing grapes for Pinot Noir but that the grapes used to make Pinot Grigio do quite well here as do Spanish varietals.  The growing season is short compared to other regions.  Joelle told us that the Symphony grape is their best seller.

Nevada grape growers are committed to building a robust Nevada wine industry.  The Lokens and others were producing 7,000 cases of Nevada wine and 100 tons of grapes by 2017.  Pahrump and the nearby Amargosa Valley are the centers of wine and grape production in Nevada.    We were told that olives are doing well in the Amargosa Valley too.

Since the beginning, I've had to avoid writing about the downside of travel in order to sell more than 100 articles. Just because something negative happened doesn't mean your trip was ruined. But tell that to publishers who are into 5-star cruise and tropical beach fantasies. I want to tell what happened on my way to the beach, and it may not have been all that pleasant. My number one rule of the road is...today's disaster is tomorrow's great story. My travel experiences have appeared in about twenty magazines and newspapers. I've been in all 50 states more than once and more than 50 countries. Ruth and I love to travel internationally--Japan, Canada, China, Argentina, Hungary, Iceland, Italy, etc. Within the next 2 years we will have visited all of the European countries. But our favorite destination is Australia. Ruth and I have been there 9 times. I've written a book about Australia's Outback, ALONE NEAR ALICE, which is available through both Amazon & Barnes & Noble. My first fictional work, MOVING FORWARD, GETTING NOWHERE, has recently been posted on Amazon. It's a contemporary, hopefully funny re-telling of The Odyssey. END_OF_DOCUMENT_TOKEN_TO_BE_REPLACED
This entry was posted on Thursday, April 4th, 2019 at 10:54 pm and posted in Nevada. You can follow any responses to this entry through the RSS 2.0 feed.
« McAllen’s Worthy Nature Center
The Bountiful Bounty »