The Jell-O Museum in LeRoy, New York is lots of fun.  Lynne, the woman who runs it, knows a lot about her subject and her town.  The Jell-O brand has been around for more than 120 years.  Lynne told Ruth and me that Jell-O is Canada’s favorite dessert and that Utahans are the state champs in eating it.    I learned later that Salt Lake City’s residents consume more lime flavored gelatin, which wasn’t introduced until 1930, than any other city in the United States.

Peter Cooper patented a powdered gelatin in 1845, but it wasn’t until 1897 that Pearle Bixby Wait of Leroy, New York, experimented with gelatin, which was invented by the French, and came up with a fruit-flavored dessert using it.  Two years later Frank Woodard bought the business from Wait.  Its 1st flavors were orange, lemon, and 2 berries.  Jell-O has been delivered by team-drawn wagons.  The Jell-O girl was introduced in 1904 because even a child can make Jell-O.  My favorite Jell-O girl portrait was by an artist named Hayden Hayden.  The girl’s name was Elizabeth van der Linde.  Unfortunately, it was never used in an ad.  Fortunately, her portrait was preserved and is featured in the Jello Museum.  Other artists like Norman Rockwell got involved in promoting Jell-O over the years as its popularity rose.  Jell-O’s ad campaigns have involved baseball cards, famous celebrities, even animals.  It became such a mainstream product that the Jell-O brand became synonymous with gelatin, Like Kleenex has with tissues.   A big campaign introduced in 1955 featured 20 animals eating Jell-O.  This fact is made known in the Jell-O Museum with the head of a giraffe.  An ad campaign near the end of the 20th century involved a billboard in New York City’s Times Square that featured steel spoons.  Some of them are on display in the Jell-O Museum.

Jell-O was made in LeRoy until 1964.  Now it’s created in Dover, Delaware.  A few well-known companies have owned this brand over the years, but it’s currently owned by the Kraft Heinz Company.  Many flavors have been introduced over the years.  Island Pineapple, for example, became available in 1996.  Lynn told us that a wonderful coffee-flavored gelatin not made by Jell-O is sold in Japan.  I would love to try this but not Cotton Candy!   Ruth was enchanted by the display of Jell-O molds.

The Jell-O Museum in only one of the attractions in LeRoy.  It usually opens daily at 10 am and closes at 4 pm.   Check before going but seek it out! 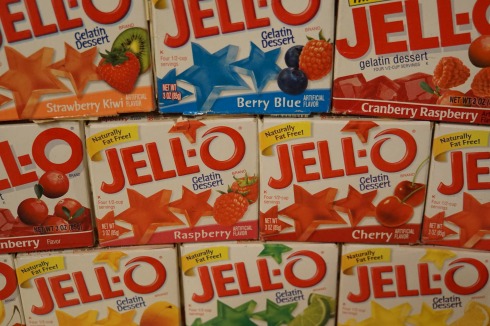 Since the beginning, I've had to avoid writing about the downside of travel in order to sell more than 100 articles. Just because something negative happened doesn't mean your trip was ruined. But tell that to publishers who are into 5-star cruise and tropical beach fantasies. I want to tell what happened on my way to the beach, and it may not have been all that pleasant. My number one rule of the road is...today's disaster is tomorrow's great story. My travel experiences have appeared in about twenty magazines and newspapers. I've been in all 50 states more than once and more than 50 countries. Ruth and I love to travel internationally--Japan, Canada, China, Argentina, Hungary, Iceland, Italy, etc. Within the next 2 years we will have visited all of the European countries. But our favorite destination is Australia. Ruth and I have been there 9 times. I've written a book about Australia's Outback, ALONE NEAR ALICE, which is available through both Amazon & Barnes & Noble. My first fictional work, MOVING FORWARD, GETTING NOWHERE, has recently been posted on Amazon. It's a contemporary, hopefully funny re-telling of The Odyssey. END_OF_DOCUMENT_TOKEN_TO_BE_REPLACED
This entry was posted on Friday, April 19th, 2019 at 8:53 pm and posted in New York State. You can follow any responses to this entry through the RSS 2.0 feed.
« Laguna Gloria Changes
Another Liberty Bell Museum »